Right on the heels of a Brad Miller double that missed the top of the fence by an inch, Chris Taylor is here to show what he can do -- instead of Nick Franklin. Taylor is getting the call as the Mariners continue to shuffle around their roster following the trade for Kendrys Morales.

Taylor has been known more for his glove than his bat in the past, but tore up Tacoma this year, thanks in part to a whopping .412 BABIP. He's got a .328/.397/.497 line with 22 doubles, seven triples, and five homers. He's also added 14 stolen bases and been caught six times.

Nobody really knows exactly what to expect from Taylor at the plate production-wise, as a lack of coverage on him until recently as well as uncertainty about his BABIP makes him difficult to project. Oliver likes his defense, but thinks he'll strike out a ton and be meager on offense (77 wRC+). Sure, there's reason to believe some of the offense is a mirage, but there's still plenty of extra-base hits and he walks a decent amount too (10.1%). He has struck out a fair amount for somebody with his batter profile (21.4%) but there's really no red flags outside of the mysteriously high BABIP.

Taylor's defense has been his true calling card, but without much available video, we're relying on scouting reports from years past. One of the first comps I ever heard for Taylor before this breakout season was Brendan Ryan, so it's clear that at least some scouts view his defensive ceiling as astronomical. Realistically, that's some sort of hyperbole. Either way, he seems certain to be an upgrade over Brad Miller and Willie Bloomquist in the field. 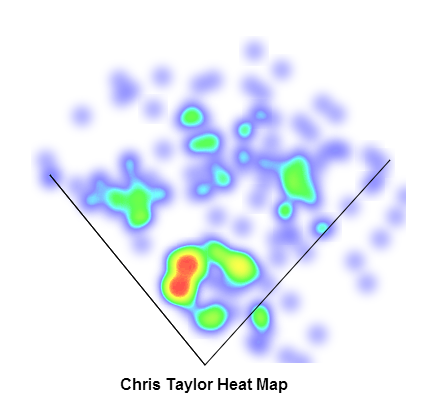 In fact, Taylor has hit more balls into right field than anywhere else.

The Mariners were supposedly calling up Taylor a few months ago, but then he hit the disabled list with a hand injury. After he returned, Brad Miller started to hit again. But Miller has been slumping yet again, and Taylor has hit .378 over the past 10 days. This isn't really a surprise, other than the Mariners finally admitting they have a real problem at shortstop. And DH. And everywhere else that isn't second or third base.

Maybe this the beginning of a new era, and maybe it isn't. Brad Miller is still very much a Mariner for now, but it seems unlikely that the team would bring up Taylor to sit on the bench. Then again, that's exactly what they did with Nick Franklin earlier in the year. Seeing how McClendon decides to balance the two, for the time being, will be fascinating. Taylor might be taking the roster spot of Willie Bloomquist, who injured himself in yesterday's game. There's a lot of things in motion right now -- nobody knows how the dust will settle, exactly.

For now, they've got themselves a slick-fielding shortstop who has a blank slate offensively. Perhaps he'll be the latest Mariner middle infielder to get promoted and storm onto the scene, only to tank the next season. In the middle of a playoff push, as long as he fulfills the first, the Mariners can worry about the rest later.

Edit: Willie Bloomquist to the 15-day DL, Jesus Montero up for what might only be one day until Morales arrives.