Brad Miller struck out looking on a meatball on Friday, and he's fallen back into his season-long slump after an encouraging June. What's he looking at with two strikes?

Share All sharing options for: Brad Miller continues to struggle with two strikes

One of the things that made this weekend exceptionally frustrating, especially in the first two games, was missed opportunities. Even though the Mariners hit decently with RISP, they missed some critical chances, especially from Brad Miller.

This, from Friday, was another one of Miller's brutal moments. Completely fooled on 3-2 curve, a blown chance to put the Mariners ahead on a pitch he should have crushed.

While Miller managed to squeak out three singles in 16 PA this weekend, he's been cratering for nearly a month after a wildly encouraging three-week span in June. At this point, sadly, Miller's past 19 games have nearly matched equally long hot streak in June, and there's a lot of fear that Miller is falling back into the hole he started the season in.

One of Miller's biggest problems this year has been his inability to make contact on pitches in the strike zone, as his contact rate on pitches in the zone is slightly down to 87%, compared to 89% from 2013. He's also been attacked with breaking balls relentlessly from lefties with two strikes -- in fact, he's seeing 50% breaking pitches in 2014 compared to just 35% in 2013, part of a significant increase in breaking balls in general to Miller. He's simply not seeing the ball well at all this year, and his strikeouts looking have shot up from 3.9% to 7.1% this year -- meaning one in every fourteen plate appearances ends in Miller watching strike three go by. Dustin Ackley, who's long been the bat-on-his-shoulder poster boy, is only at 4.5% this year. Of current Mariners, only Stefen Romero grades out worse in this regard.

Miller isn't exactly overly patient, either. Pitchers have attacked Miller relentlessly this season right away, as he ranks 17th in the American League in seeing first pitch strikes. He swings a ton at the first pitch in the count, especially if it's a fastball in the zone, and he's had success doing it. If a 0-0 fastball ends in a result at the plate, Miller is slugging a whopping .773. But it's when that first pitch swinging doesn't conclude the at-bat that Miller ends up in a hole.

The worst part about Miller's timidness at the plate is where he's getting caught looking. Sure, there's plenty of the typical lefty strike sitting on the outer edges of the zone, but there's also pitches littered all over the middle of the plate. 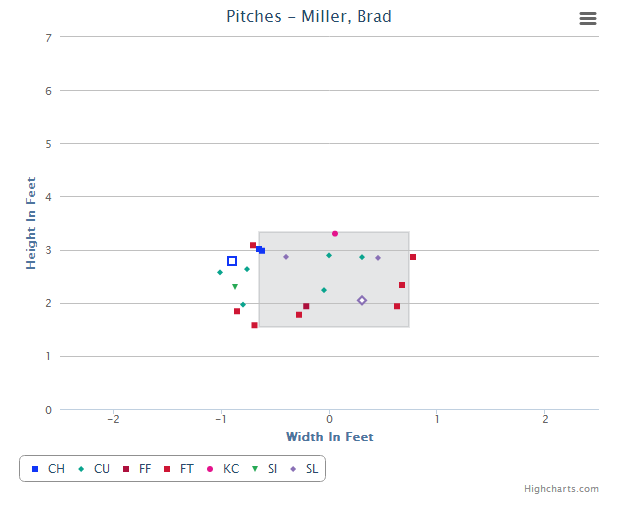 Miller was lost, then he wasn't, and now he is again. While I'm still hanging on the long-term Miller bandwagon as a believer of his upside, pitchers have adjusted to Miller and he hasn't been able to react. Everybody gets caught looking every once in a while, but Miller's early aggressiveness paired with his two-strike reluctance isn't working out. It's hardly unusual for a player struggling, but it's one part of the story that tells Miller's disastrous 2014 -- a lack of a plan at the plate and an inability to react if he doesn't crush a first-pitch fastball.

Editor's Note: SB Nation's partner FanDuel is hosting a one-day $18,000 Fantasy Baseball league tonight, and you can win up to $2,000. Brad Miller is dirt cheap for a reason. Join today!