Mariners lose series to Angels after a tough 6-5 loss

The Mariners may have lost, but that doesn't make them any worse of a baseball team than before.

Share All sharing options for: Mariners lose series to Angels after a tough 6-5 loss

Sports are strange. Time and again, we put our emotions in the hands of someone or something that's out of our control. We take pride and sorrow in something we had nothing to do with. Sure, we don't personally have any influence on the performance of the Seattle Mariners (unless you do, somehow), but it feels like we do anyway. There's nothing wrong with that. This isn't at all to discourage you from being a fan of the teams you've loved for your whole life.

In some ways, sports are relaxing in that sense. All you have to do is sit down and watch or listen to a game and not have to worry about the difficult decisions those involved have to make. Analyzing is fun too, and it's great to have opinions about what should happen next without having to worry about your own job being on the line for the results that decision caused. Being a fan of a team is like being a part of a family or community (like Lookout Landing, a Seattle Mariners community!) It brings people together with one common goal and allows us to enter a whole new world where the worries of the outside world have less influence. This, in the end, is a good thing.

However, as with any community, family, or story, there are many ups and downs. Today (and this series as a whole) was certainly one of those "downs." In a way, it's a whole new kind of down that hasn't been felt much in a long time. It's been a while since the Mariners lost on a blown save by Fernando Rodney. The last time was May 13th against the Rays. So far this year, the "Fernando Rodney Experience" has been less of an experience and more of a good-night-see-you-later-thanks-for-coming one-way ticket to a close victory. Not tonight.

And sure, blame it on the early arrow shooting all you want. Yes, the Angel players saw it. Yes, they were pissed about it. But I find it hard to believe that could have made it any easier for them to pull out a victory against one of the best closers in baseball. No, there are a couple of far more likely factors that led to Rodney's collapse.

The first factor is the fact that the past two games went into extras and taxed the bullpen like crazy. Rodney was asked to come out for a five-out save because Joe Beimel couldn't get the job done in the eighth (because he was tired, the Angels are good, and he's bad against righties) and because Danny Farquhar and Tom Wilhelmsen were unavailable due to the work they had put in the previous two nights. Even Rodney himself threw an inning in last night's game and was being asked to face the heart of the Angels' order (one of the best in baseball) with a one-run lead in a hostile environment.

The second factor would be some very poor calls by the home plate umpire in a ninth inning at-bat to Mike Trout (photo courtesy of Colin O'Keefe): 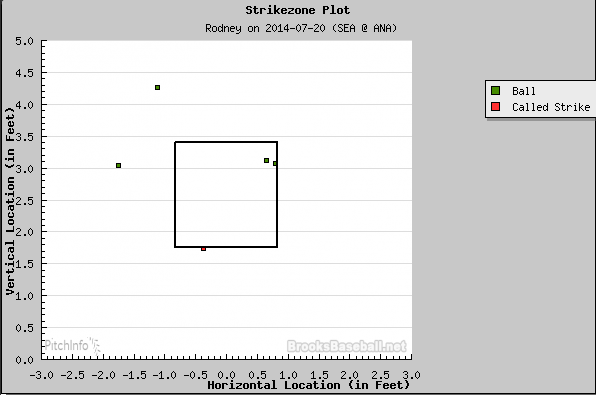 The last thing that Rodney needed with all the above factors already being mentioned added on was the umpire squeezing him against arguably the best hitter on the planet. That's a recipe for disaster.

So while a win obviously would have been the ideal scenario, the Mariners were only a few outs away from winning this series. A loss is a loss and moral victories count for nothing, sure, but I for one am far more encouraged by the Mariners making all three games competitive until the ninth inning (and beyond) than if they had been blown out by five or six runs each night. Especially so when you consider the lineup the M's had to throw out there today and the limited options they had in the bullpen. Kudos to the M's for making this series an entertaining and encouraging one.

Sports are weird and the emotions around them are often frustrating. However, the M's just went 3-3 against the two best teams in the sport and still hold a playoff spot at this very moment. Help is likely on the way and the Mariners will come back home to face a pair of teams a little easier to beat than the ones they just saw.

Way back during the 2012 eight-game winning streak people were saying that good teams are the ones that play .500 ball against other good teams and beat up on bad ones. The Mariners just did the first part. Now it's time to take care of the second. The Mets and Orioles are next up on the schedule and by the time those games are finished, it's probable that a trade or two will have been made to bolster this already-potent squad. I'm excited to see what these next few weeks will have in store for us fans who've invested this time and energy to watch our favorite baseball team grow into what it is today.