The Mariners are dead. Well, okay, I should stop for a minute before I get ahead of myself. It's only July 2nd, and there is a lot of baseball left to be played. Injuries could derail momentum. Taijuan could be a mess. Kyle Seager could crater, and Cano could theoretically run into a BABIP dragon. Rodney could fall apart. Ceiling tiles could fall from the stadium and the plane could crash, and The Big One could finally hit and turn the West Coast into an oceanic theme park of destruction.

But amidst all that, you can't really help feel like The Mariners are dead. You know, The Mariners. The team we all have come to know over the past decade, the team that sends talent like Adrian Beltre and Cliff Lee and John Jaso out the window of the car just for the thrill of seeing it get caught up in a wind gust. The team that has had years of negative-triple-digit run differentials, the team that paid $36 million dollars to a player that looked up to the Mendoza line and whined when Griffey pinch hit for him. The team filled with bust prospects, whose mere mention was fodder for sympathy laughs on ESPN and MLB Tonight. The team whose name slowly became both a noun and a verb over the past ten years. The Mariners.

Fine. We all know they have a long way to go to kill that beast for good. But this is a team that now sits nine games above .500, having won 13 of their past 17 games, a team that has had the best record in baseball since the day their eight game losing streak ended. A team with an All-Star second baseman, a should-be All-Star third baseman, the best pitching staff in the American League, and inexplicably positive regular contributions from names like Endy Chavez and Cole Gillespie. I don't know what team this is, but it's not The Mariners. That much seems true.

Today Chris Young did a thing, and that thing was the thing that Chris Young has done all season, pitch effectively towards a good result despite breaking all the rules. Chris Young gave up two hits today, and both were home runs. This means his BABIP was .000 on the day, lowering it .203 on the season. Chris Young cares not for your silly statistics.

Chris Young struck out Jose Altuve twice today. He professionally dodged praising himself in his post-game interview, choosing instead to fawn over Altuve's character and skill despite probably knowing that when the tallest pitcher in the game pitches to the shortest batter in the game, the rules physics break down. Two strikeouts to Altuve, who has struck out 25 times in 367 plate appearances. For reference, Robinson Cano has struck out 40 times in 343. Chris Young is magic.

For a minute, though, it looked like The Mariners were alive and well, despite all this recent success. After Robinson Cano walked in the first inning, the team was looking at blanks into the sixth inning. Dustin Ackley continued his recent hot hitting with a single in the second, still fresh off learning the M's tried to put him on a train to Houston last offseason. By the sixth, the Astros had hit their two dingers off Young--first from Marwin Gonzalez in the third, and then one from yesterday's Astros' story Enrique Hernandez.

But then the sixth. For The Mariners, the sixth inning was usually the time you got up to go to the bathroom, regretting that there was approximately an hour left before you were emancipated from the prison that is Safeco Field or the tractor beam of the ROOT television broadcast. But not for The Mariners. Yesterday The Mariners scored seven runs in the sixth. Today that number was a mere four, but hey, it was all they would need. The Mariners don't always need 10 runs.

We should be clear here, though. It was certainly exciting, and part of the reason that the M's got on the board here was thanks to some smart hitting at the right time. But another, perhaps bigger reason is that Bo Porter either holds intense personal grudges towards his pitchers, has no faith in his bullpen, doesn't know how to manage pitching changes, or perhaps all three. This is the same thing that happened last night, too. Then, it was the sixth, and he finally pulled starter Jarred Cosart after giving up a double to Robinson Cano. He put in reliever Darin Downs, and then let him stew on the mound while he gave up three consecutive doubles and a single. It was only after this single that they even bothered checking up on him with a mound visit, and afterward he gave up a double to Dustin Ackley. Then Porter still let him face Brad Miller. I'm saying all this without knowing the rest state of their bullpen from the weekend or anything, but shit, man. That's some bitter revenge stuff right there.

Well today wasn't quite as bad, but Porter could have probably at least limited the damage a bit. Brad Peacock entered the sixth inning with his pitch count in the mid-70's. It took him five pitches to strike out Endy Chavez. It then took him seven pitches before James Jones lined a single into centerfield. Robinson Cano came up and Peacock, command visibly dropping like a bag of groceries on the asphault, hit Cano right in the back of the leg. It wasn't a breaking ball that got away. It wasn't a fastball.

He immediately hung his head in shame, and proceeded to walk Kyle Seager on four pitches (one of which, granted, was an absolute freebie). 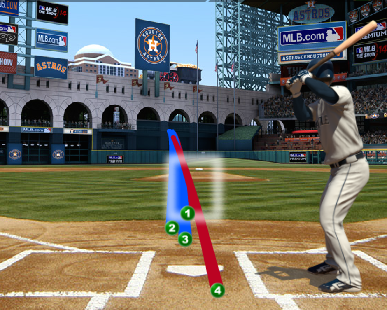 The Astros were holding onto a thin 2-0 lead here, and had the bases loaded with no outs. Now, sure, this would have been nothing doing for The Mariners. But these aren't The Mariners. The guy who was on third was a person who can run kind of sort of faster than some other people, a little bit. The first baseman coming to the plate owned a positive WAR. I'll let you gather your belongings here, I know they are on the floor after you just fell over in shock.

Peacock finally got his mound visit. But that was it, because apparently masochism is all the rage in Houston now and everyone was salivating over another another pitcher being left on the stove for too long. So what did he do? He threw a ball in the dirt near Morrison's feet. Ball one. He wound up and threw another ball in the exact same spot, this time rolling away from catcher Carlos Corporan. Jones scored before Corporan could even find the ball. Everyone settled back in, and the camera cut to Corporan preparing to throw a new ball back to Peacock. Two hollow eyes radiated through the narrow slit in his catchers mask, empty, dejected with terror. It had finally dawned on Corporan, right there at that very moment. Maybe he would have been more prepared if he had actually read that Nietzsche book he left to gather dust under his bed in college back in Florida. Maybe he should have just gotten a desk job somewhere. He could sell insurance with the rest of them. He always looked good in a tie.

As he was thinking all this, Peacock threw a ball directly over the center of the plate, because he couldn't hit the zone any other way. Suddenly, Logan Morrison was standing on second base and Robinson Cano was high-fiving Kyle Seager three feet out of the batters box, headed back to the Mariners' dugout. Corporan looked towards his own, and saw Bo Porter picking his teeth with a toothpick. Not like this he thought. Not like this.

Peacock remained in the game even after this, still unable to hit the zone. And this time it was John Buck who forced him into throwing over the plate again, scoring Morrison from second. The Mariners were up 4 to 2, and Brad Peacock's day was finally done. Porter emerged from the dugout and called for reliever Anthony Bass, who finally got the Astros out of the inning.

As Corporan sat in the dugout with a dejected Peacock, they probably didn't realize that Porter's reluctance was due in part to the fact that Houston has the worst bullpen in the bigs. Worst by ERA, second worst batting average. Bottom third everything else. You can't really blame Porter too much, but you also can, because yikes. Bass would come back in the seventh, giving up a two-out double to Cano, who was plated by a single from Kyle Seager and the Mariners were up 5-2.

We've been talking a lot about the rest of the season here lately. Fantasizing about having our team buy come trade season. Strength of schedule, The A's, pennant races and division standings. It's all fun stuff, because many of us weren't even around the last time this stuff mattered to the Northwest. But I want to take a step back from all this and just look at The Mariners. These Mariners. They are far from a perfect team, and could probably still use a bat or three to even begin to reflect any notion of sustainability. There's always the looming fear that a lot of this success is due in part to random meltdowns in Texas and the like.

But two years ago I sat chained to my couch like a prisoner as I watched Miguel Olivo strike out against Jim Johnson and the Baltimore Orioles in the eighteenth inning. It was 1:30 in the morning. I don't know why I didn't just turn off my television and go to bed hours earlier like any medical professional would have advised. But it didn't matter. The Mariners were on my screen, and that's all I had, and it was all you had, and it was all a lot of people had. That's not true anymore. I don't know if The Mariners are going to do anything in October this year, and we should all recognize that this could all come crashing down tomorrow. But even if that happens, one thing is true, at least for the past two months: