Why not call Garrett Richards on his pine tar?

Everyone does it, I'm aware—but this is a unique situation.

Share All sharing options for: Why not call Garrett Richards on his pine tar?

Pitchers doctor the baseball. They pretty much all do. Pine tar is everywhere, and it isn't all that difficult to take a swatch of it, hide it in your glove, on your belt or the bill of your cap, and then apply it when needed—or all the time.

Well, things get a little more difficult when it comes to the last option mentioned above if your team has a light cap—as you can see, in a gif from tonight's game against the Angels courtesy of @Jose8BS. Garrett Richards needs a little extra help.

As I mentioned, about everyone does this. The Mariners themselves aren't immune.

This type of stuff goes uncalled all the time. The only time it wasn't, in recent memory, involved our old friend Michael Pineda. 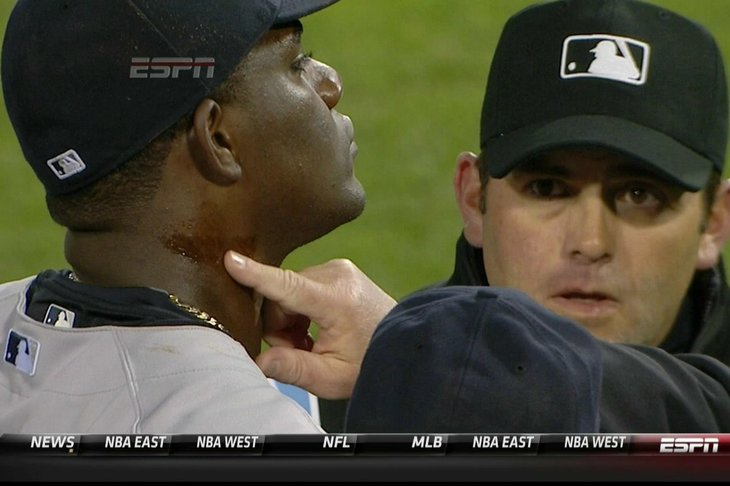 Red Sox manager John Farrell, who had Pineda checked, said this after the game.

"I could see it from the dugout," Farrell said. "It was confirmed by a number of camera angles in the ballpark. And given the last time we faced him, I felt like it was a necessity to say something."

In sum: "If you're going to do this, at least try to hide it. To put it out there like that is an obvious affront."

Is Garrett Richards really hiding it any better than Pineda? I don't think so.

But that's not the biggest deal to me. No, it has to do with what happened last night, when we had this whole fiasco:

I'd wager situations like that happen all the time, and they frequently go unchallenged. Obviously, there was a game on the line, and Angels manager Mike Scoscia wanted to take a look.

So, Mike, if you want to play by the letter of the law, why not watch your starter get tossed early and be forced to rely on a gassed bullpen?

It'd be a bold move, one that would certainly elevate tensions between the two clubs and could have repercussions later, but in the heart of a playoff race, it's worth wondering if it might be worth it.