The Angels beat the Mariners, finally, after seventeen hours, three thrown bats, and 84,000 closed eyelids in the big A. 3-2 Angels. 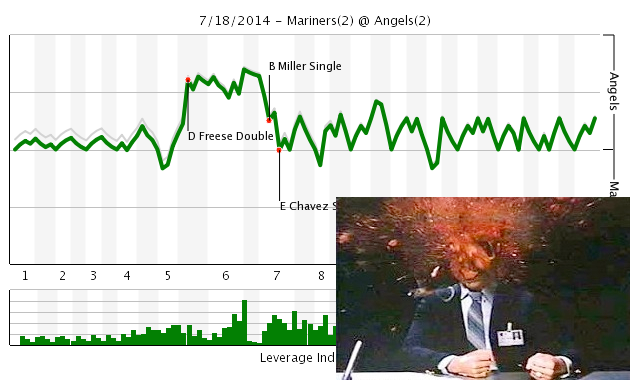 So look. There are a lot of things about this here baseball game that we could start talking about, but what I want to begin with is the fact that Josh Hamilton was at the plate in the sixteenth inning with three strikeouts and six outs on the day, and Lloyd McClendon decided to put him on base.

Let's rewind. Today, Hisashi Iwakuma started pitching at about 7 in the evening, and he lasted seven innings with three strikeouts. He gave up two runs in the bottom of the fifth after David Freese doubled to score Howie Kendrick on a close play at home. Mike Zunino caught the relay throw in from Robinson Cano with plenty of time to tag Kendrick out at the plate, but the ball abandoned his glove like reason abandoned whatever the hell happened over the next four hours of the game and the run scored.

It felt terrible, but you have to think that Mike Zunino has practiced protecting the plate and getting bowled over by runners for twenty something years, and then this spring they told him he had to stand over there and bop someone on the head with a glove instead. That's exactly what happened here, and he'll probably figure it out over time, but good intentions don't save runs.

It was 2-0 until the seventh, when Dustin Ackley doubled and scored on a first-pitch Brad Miller single. This was kind of frustrating because an inning before the bases were loaded, and Justin Smoak struck out on a kind of terrible strike zone that looked like this throughout the evening: 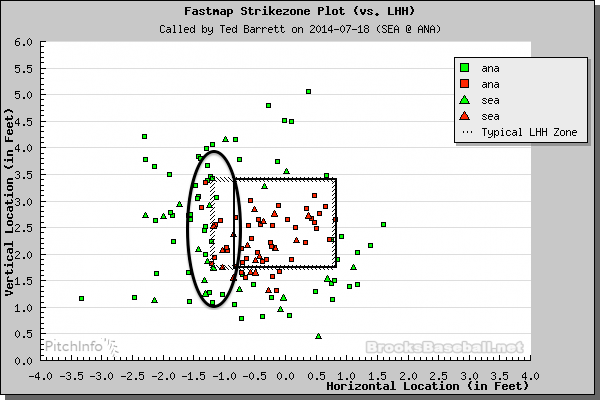 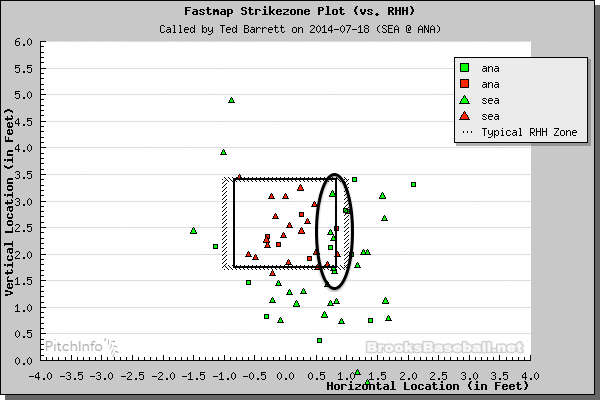 Now, it would be wholly irresponsible to say that the Mariners lost today because home plate umpire Ted Barrett called a bullshit zone, but it certainly doesn't make any of this any easier to stomach. Hell, it was bad for both teams, and at the very least, 16 innings could have been avoided if he was just consistent in the first place. But alas, why we should spend energy complaining about a strike zone in 2014 is beyond me.

Point is, the M's tied it up in the seventh on singles from Miller and Endy Chavez, and then there were nine more innings left to be played. Nine innings where the Angels used up their entire bullpen and had to dip into their starting rotation. Nine innings where Tom Wilhelmsen looked like a legitimate starter with more strikeouts in four innings than Iwakuma had in seven (four). Nine innings that included a lights-out appearance by Brandon Maurer that shouldn't surprise us anymore, timely BABIP dragons with hitters like Albert Pujols at the plate, and lucky, well timed outs.

But there were also nine innings of strikeouts from M's hitters. A BABIP dragon that had no rooting interest, apparently. Endy Chavez threw his bat twice in a single AB, and Mike Zunino popped up two consecutive bunt attempts with no outs because Lloyd apparently wanted to just get the hell out of dodge. Mike Trout got his hand stepped on, Erick Aybar pulled his groin, and Dustin Ackley looked at his fair share of first pitch strikes over the center of the plate. Corey Hart had a nightmare pinch-hit at bat, Robbie hit a double and then apparently slid off the base by an inch to be called out, and Kyle Seager struck out three times without ever reaching base. Weeee!

It all ended, as I mentioned earlier, with two outs in the bottom of the sixteenth with Josh Hamilton at the plate. Lloyd decided to put him on base, and then Dominic Leone threw whoever the hell Efren Navarro is a meatball right over the plate that was deposited into centerfield to score the winning run of the game. Game over. Eyelids sealed shut. Drool captured on shirts across the northwest. The beat goes on, and on and on.

It's late and I don't want to talk about this game anymore, so I'm just going to write one final paragraph.

I'm getting ready to move across the country, and just sold all the furniture in my living room except for my couch, television, and television stand this afternoon. It feels like one of those cartoons when a thief comes in and steals everything, leaving outlines of the stolen goods in an empty room with nothing but wallpaper and carpet as far as the eye can see. I spent the final innings of this game laughing while Endy Chavez tried to literally throw his bat at a pitch so he could get on base, at midnight, five hours into a baseball game in an empty room that felt like it was pulled straight out of a David Lynch movie, barren, empty and like a strange kind of prison. I know that I was still watching because the Mariners are actually playing baseball that matters (and because I have to for my job), and that this win mattered, but damn. Damn. The Mariners can't even be a competitive baseball team without turning everything into some kind of existential nightmare. Tomorrow we get Felix and all, but I can't help but start laughing now. It only seems proper, anyway.

1. Did you watch this whole game?

2. Stop lying, when did you turn it off?