We know that King Felix is amazing. But is he the best?

Hello Lookout Landers! And Happy Felix Day. I'm a new face 'round these parts and I'm really excited to have the opportunity to write/talk about baseball with/for all of you fine folks. In order to win everyone over as quickly and efficiently as possible, I'm going to start out by writin' about Felix Hernandez. Here we go!

As Mariners fans, we all love Felix. (How could we not!?) If we didn't have Felix, many of us would probably have seriously considered jumping ship at some point over the last 10 years. Although being a Mariners fan can be fairly difficult, getting excited about Felix is easy. In this post, I've attempted to come up with a slightly different way of recognizing King Felix's greatness by trying to answer the following question: Is Felix Hernandez baseball's aciest ace?

To determine the true measure of an ace, I believe there are two chief factors that we should consider: dominance and prominence.

Dominance: This, of course, refers to how lights-out-knock-your-socks-off fantastic a pitcher is. There are many metrics that could be used to determine dominance (e.g., K%, wOBA, or the nonchalance with which a pitcher walks off the mound after striking out the side), but I think, for simplicity's sake, I'm just going to use WAR (fWAR). I acknowledge that WAR (especially pitcher's WAR) is far from perfect, but since the question I'm attempting to answer isn't super serious, I think it'll be okay.

Prominence: I'm defining this as the degree to which an individual stands out from his peers ("peers" being the other men in his starting rotation). Prominence also has a technical definition, in terms of topography, which might help to further illustrate my point. A mountain's prominence is related to the height of its peak relative to the topographical features of its surroundings. (This is a bit of an oversimplification; I encourage you to enroll in a GEO 101 course if I've piqued your interest.) For example, when comparing Mt. Rainier and K2, Rainier is actually slightly more prominent, despite being half as tall. This is because K2 is in the Himalayas, surrounded by other monstrous peaks, whereas Rainier is a lone behemoth. Although comparing the prominence of peaks with the prominence of pitchers is probably an imperfect analogy, I think it still helps to get my point across. A true ace should be the clear MVP of his rotation.

Now that we've established and defined our variables, let's look at some data!

As far as dominance is concerned, Felix is 100% dealing this year. So far in 2014, he's posted career best K/9, BB/9, and HR/9 rates. At the break, he has 5.2 WAR. If he maintains his current pace (which would be bananas), he'll finish just shy of 9 WAR. That would qualify as one of the ~30 best individual seasons for a pitcher since the beginning of the live-ball era. It's likely that Felix will cool off a bit in the second half; Steamer and ZIPS project him to finish with 7.3 and 7.9 WAR, respectively. However, his career 1st half and 2nd half splits are quite similar (.286 vs .290 wOBA, respectively), so it's unlikely that he'll slow down too much. I think it's fair to say that Felix has been one of the most dominant pitchers this year.

But has he been the aciest ace?

To answer this question, I contend that we must also consider prominence, which means taking Felix's peers into account. Below, I've put together a simple stacked bar graph to illustrate how valuable each team's starting rotation was during the first half of 2014. (For this chart, the "ace" is the starting pitcher on each team with the highest WAR. "Other guys" refers to the remainder of the rotation.) 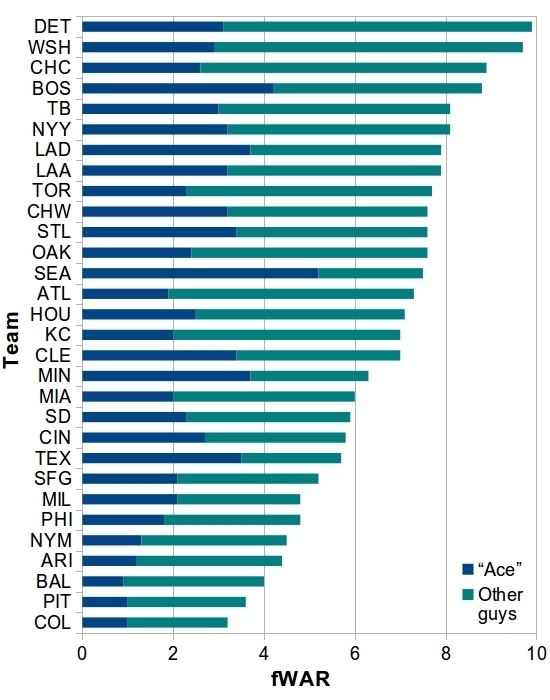 We can see that the Mariners starting rotation, when viewed as a whole, has been solid but unremarkable. Hisashi Iwakuma is an extraordinary talent, but he's had some rough patches this year, and he also missed the first eight weeks of the season. Additionally, fWAR hates Chris Young, so his value in these calculations is minimized. Finally, the back end of the M's rotation has been inconsistent, acting to deflate the overall value of their starters. In any case, we can see that Felix's contribution has been immense. His blue bar is so long! To look at this more closely, I isolated the pitchers with the highest contributions in 2014 and compiled the table below:

Most aces provide between 30 and 45% of the value to their team's rotation. Felix has been worth 70%. He is such a stud. (As much as you appreciate Felix, you don't appreciate him enough. Try harder!) 70% seemed high to me, so to get more perspective, I went back and calculated the contribution of aces to their team's rotation each year for the past 10 seasons. (For this calculation, I only considered pitchers with more than 3.5 WAR.) 199 pitchers met these criteria. Felix's 2014 season is on pace to be the fourth most prominent of any starter since 2003. Not too shabby. (For reference, the most prominent season over the past decade was Randy Johnson's '04 campaign where he was worth 9.5 WAR in a rotation that managed only 11.3 WAR. The D'backs lost 111 games that season. Ouch.)

Looking at the remainder of the season, it's unlikely that Felix will continue to contribute more than 2/3 of the value to the M's rotation. Iwakuma is definitely starting to pick it up and either Walker or Paxton (or both!) could get healthy/comfortable. The Mariners could also make a trade to upgrade their pitching. Who knows!? Regardless, it is clear that Felix has been an exceedingly prominent pitcher this year.

So we've determined Felix's dominance (highest WAR) and prominence (largest contribution to the starting rotation) this season. Since he ranks as number one for both of these variables, I think it's safe to say that he's baseball's aciest ace in 2014. Hooray! But now I'm curious as to how his year (so far) stacks up against past great performances. To look at this, I generated a simple figure of merit by multiplying a pitcher's WAR in a season with their contribution to the rotation, yielding what I'll refer to as a pitcher's "ace points". Below are the top ten performances, in terms of ace points, since 1920:

*Based on maintaining 1st half performance in the 2nd half.

Look who's in the top 10! Felix continues to impress. He's putting together a pretty special season. Also, even if I incorporate Fangraph's more conservative projections for the Mariners pitching staff (which currently project 2.3 WAR for Felix and 2.2 WAR for the rest of the rotation, over the remainder of the season), Felix would still end up with ~4.7 ace points, which would qualify among the 35 aciest seasons.

This year, teams like the Tigers and Nationals can be compared to the lofty Rocky Mountains, where several marvelous pitchers are lined up in close proximity to one another. Alternatively, some teams have terrible starting rotations where no one stands out; these teams (like the Pirates or, ironically, the Rockies) are more akin to the Appalachian Mountains. And then there are the Mariners. A single, majestic peak nestled between a series of bumps and foothills. It's true that a seismic event could occur at any moment, causing existing features to dramatically rise or fall, severely changing the landscape... but today there is only Mount Felix. Baseball's aciest ace.

I hope you all are enjoying the view.

A couple quick follow-up questions, just because I'm interested in what you guys think:

1. Does anyone have any preconceived notions about what a "normal" rotation should look like, from a statistical viewpoint? For example, I'd imagined that a team's 1-5 starters would be worth ~4, 3, 2, 1, and 0 WAR, respectively, but it seems like my estimation is selling the rotation a bit short.

2. Do you think there's any chance that Felix could be in the middle of an historically epic season? Like Carlton in '72,  Pedro in '99, or Randy Johnson in '01? If the Mariners stick around and are in playoff contention toward the end of the year, I can absolutely imagine Felix kicking it up to another gear and just decimating the competition. For the first time in a long time, I'm genuinely excited for the second half of the season... baseball!