Share All sharing options for: Mariners clinch home-field advantage in the World Series

Normally, this is just an easy joke. Usually, the Mariners are about 15 games back, have Felix Hernandez as a token all-star, the American League wins and we all slap each other's backs and yuck it up about how game seven of the World Series will be played at Safeco. This year it's different.

Not because it isn't just some dumb joke—because it most certainly is. But this year, this year the Mariners had four all-stars and our own Felix Hernandez took the ball to start the whole damn thing off. And of course, Felix was Felix.

While I had visions of Pedro in '99, this wasn't quite that. It was still everything one could have hoped for, to see Felix strut in from the pen, then walk up the mound with the top button of his jersey undone—a jersey that now looks a size or two too big—and go to work. Our beloved ace has a long ways to go before he's revered nearly as much as he deserves, but this was a step in that direction. And it almost wasn't.

Felix doesn't get the opportunity to appear on the national stage much, and him giving up even one run would've taken some of the luster out of it. And that nearly happened, as Felix ended his inning of work stranding Andrew McCutchen at third. Cutch reached on an infield single that Derek Jeter made a diving stop on, but couldn't get the throw to first in time. It felt so typically Felix.

It got worse from there, as McCutchen advanced on a change in the dirt, and I'd say that was also "so typically Felix," but we don't have a catcher who idiotically stabs at pitches in the dirt anymore. I know this was just an exhibition game, but it was a moment that made me never, ever want to go back to living how the other half lives. From there, it was quintessential Felix.

He locked in, and shut the offense down by himself. He started Yasiel Puig with a slider for a ball, then threw four straight changeups—two for swinging strikes. That'd be the first of three strikeouts for Puig. Then, Troy Tulowitzki got his own pair of swinging strikes on the changeup his way to an eventual strikeout—with McCutchen stealing third in the process. But, no matter, Paul Goldschmidt would ground out sharply to third.

Now, things could've gone a little better for the Mariners' other superstar starter. Robinson Cano went 0-for-2 with two strikeouts. With nobody out and a man on third in the first inning, Cano had this to offer:

And that was the theme of the night for Kyle Seager as well. Seager didn't make it into the field, and didn't have a hit either. Like Cano, he had two ABs and went 0-for-2. In his first, he ripped a hard grounder right at Freddie Freeman. In his second at-bat, he didn't have a prayer. Triple digits from the left side? Yeah, that's not good for anybody: 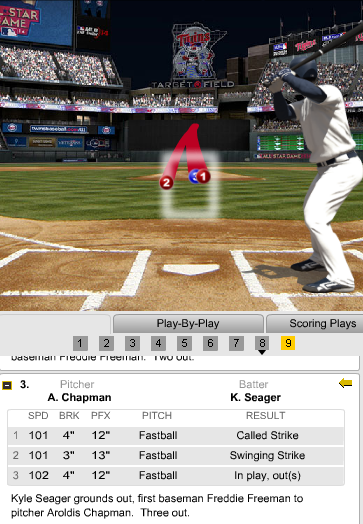 For me, the highlight of the night may have been Fernando Rodney. Honestly, I'd been in and out of a couch nap during the mid-to-late innings, between Mariners happenings, and awoke to the game returning from the commercial break with a blimp shot. And even from the blimp shot, the little white dot on the mound had a Fernando Rodney strut to him. Fernando Rodney is just always so Fernando Rodney.

It was fitting then that he entered and immediately issued a four-pitch walk to Todd Frazier. Next, going up 0-2 on Daniel Murphy like it was nothing, with a fastball across the outer black and a changeup low. Murphy would foul the next pitch off, and then this:

Afterwards, there were some cracks from the Old White Guy Police on Twitter about whether or not it was appropriate to celebrate like that after getting the last out of the eighth inning. Which, come on.

Welp, the Mariners still have two more days off before they're back at it on Friday. God, that's a painfully long time.