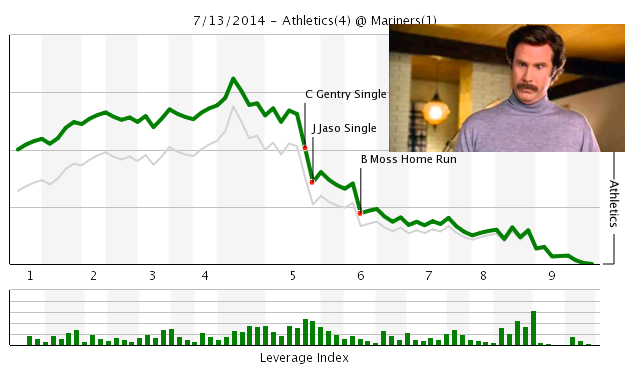 Well, we made it. It's the metaphorical halfway point of the 2014 season, and the Mariners have their best record at this point since 2003. Now sure, that's a little misleading. The All-Star game always happens on a different date, so that sentence can't really carry any statistical weight. But don't tell me it doesn't feel damn great right now, even though the A's just beat the Mariners 4-1 to end the first half of the year.

Today Chris Young was looking great early before he ran into the best lineup in baseball, suffering from a bit of a messy fifth inning that did all the damage the A's would need to win their 59th game of the year. Young didn't give up a hit until the third inning, when Andy Parrino, fresh from AAA, spotted up a 79MPH slider to reach second base in only his third game in the majors all year. But Young got out of the inning unscathed after Craig Gentry and John Jaso popped out for the final two outs of the innings. Not quite the Bash Brothers of yore, but I prefer this version myself.

The M's only run of the game was all thanks to James Jones, who ripped a one-out single in the first inning, reached third on a bad pickoff attempt, and then scored on a groundout from Robbie. It would be the only times the M's got on board all game, but they certainly were more active today than during whatever the hell happened in Chicago and against the Twins earlier in the week. The M's had six hits and two walks today, and while they failed to convert any runners into runs past the first inning, it was far from a sinking ship. The M's just took a series from the best team in baseball, and you had to know that team was going to come back with all they had in this third and final game.

After two runs in the fifth and a solo home run from Brandon Moss in the sixth, Lloyd went to his pen and put Danny Farquhar in to get through the seventh. Farquhar got two outs but put two on after giving up a single to Andy Parrino (seriously what does Billy Beane feed these people) and hitting John Jaso on a misplaced fastball. As Jaso slowly trotted to first, some fan shouted angry platitudes towards the former M's catcher, and I couldn't help but imagine some fantasy world where Jaso was right handed, was never traded for Michael Morse, and is currently a part of the best catching platoon in all of baseball. But then I realized that the Mariners have 51 wins at the All-Star break and in a way, this is also kind of a fantasy world.

The rest of the game passed mostly without incident--Brandon Maurer had a clean eighth and hit 99, but needed 16 pitches to do it. I can't help but feel he's going to be on the move around the trade deadline, and if that's the case, enjoy him while he lasts. Joe Beimel gave up a dinger to "Little Nicky Punto," in Lloyd's words, and Sonny Gray wasn't pulled until late in the eighth with two on and two outs. Gray was really great today, showcasing his new changeup on an M's lineup that looked ready to hit their couches wearing sleeping masks.

Gray was a good pitcher last year, worth 1.5 wins by the end of his rookie season. He's already been worth 2+ this year, and that changeup seems to be a large part of his success. He's throwing it nearly twice as much as he did last season, and as a result, his fastball usage has gone down by a large amount. He's abandoned his slider altogether, so instead of being a pitcher with ammo he's now going to be a deceptive jerk instead. It worked for Felix, you know. Gray is going to be someone to keep an eye on for the next couple of years, and the M's are going to be seeing a lot of him during that time. So let's rehash this: a young A's pitcher got the win today, and he's going to get some more wins soon. Grass is green, the sky is blue, the earth revolves around the sun.

So yeah, the M's couldn't pull off the sweep today, but I would bet good money that few thought they would win the series this weekend, so you can't really feel anything but good about all this. There is a lot of exciting, meaningful baseball left to be played in the coming weeks. A bunch of neat and famous players are going to play a baseball game on Tuesday, but James Jones and Mike Zunino are going to get a solid breather. Someone not currently in an M's uniform will be on their way to town soon. You won't have to see Vern Fonk commercials for at least five days. I'm honestly going to enjoy a little break myself.

But on Thursday I know I'm going to be counting down the seconds to see the M's take on the Angels and get this whole thing back on track. I can't wait. So until then,

1. What part of the All-Star week are you most looking forward to watching?

2. Ryan Divish has tweeted that Phillies outfielder Marlon Byrd is willing to waive his no-trade clause if he is dealt to the Mariners. Thoughts?

3. Favorite moment of the first half of the season: