Hisashi Iwakuma was dealing tonight and the entire team chipped in for a great all-around win in front of a huge crowd.

Share All sharing options for: Mariners stomp on the A's, win 6-2 and guarantee series victory heading into All-Star break

I can't believe it actually happened. The series against division rival and the best team in baseball in the Oakland A's that was so hyped up after the M's had lost five of their last seven to pretty bad teams will result in at least a series win for the Mariners. The worst case scenario at this point is the Mariners go into the All-Star break with a series win against an incredibly good team. The best case scenario? A sweep against the very same team giving the M's a ton of momentum propelling them into the second half. What a horrible fate.

I wasn't at the game, but it looked like a fantastic atmosphere and a near-sellout. It seemed to be an even better atmosphere than last night's game (which I did attend). The Seattle Mariners fanbase is clearly awakening from its slumber, where we always knew it lied. It's not just Mariner fans, either. Fans everywhere are taking notice of what the M's are doing here. Below is the list of the most-searched players on Fangraphs in the past day: 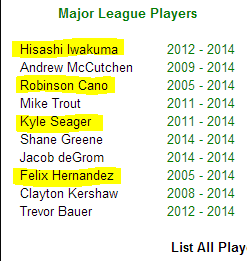 Sure, number of searches on a baseball stats website certainly isn't a good measure of success for a baseball team at all. But it speaks to the fact that the Mariners are relevant once again. Now it's time for some improvements on the roster to prove that this isn't just some fun first-half story; it's time to prove that the M's are for real once again. They've done it for one half, great. Let's see this excitement stretch out into the fall.

Alright, now onto the game itself. I cannot go any deeper into this recap without mentioning Hisashi Iwakuma. He was simply electric tonight. He opened up the game with five strikeouts in the first two innings. After that, he wouldn't strike another batter out until the seventh inning, but that didn't matter. As the game went on, Kuma became more and more efficient with his pitches and he had tremendous control of his fastball throughout the entire game. Sure, he definitely got a little bit of help from home plate umpire Bob Davidson, who was inconsistent on both sides tonight. Thankfully, that doesn't need to be a big plot point in this game like it might be on other nights.

Iwakuma nearly got the shut-out and his first career complete game on his own bobblehead night, which would have made for an even better story than this game already is. Unfortunately, with two outs in the ninth Brandon Moss decided to do this Brandon Moss thing against the Mariners and hit a bomb out to right field. Those were the only runs the A's would score on the night though as Kuma tossed 8.2 innings of what might have been the best baseball game he's ever thrown.

Give a lot of credit to Jesus Sucre for the game thrown by Kuma tonight. It's becoming clear why the Mariners made the decision to DFA John Buck to make room for Sucre. Sucre's defensive skills behind the plate are supreme, and he did a great job framing Iwakuma's pitches. Even a lot of the pitches that were called balls were framed pretty convincingly. Even with the bat, he went 1-for-3 with a sac bunt, which I would gladly take from him every night.

In reality though, this game was a team effort. I know that sounds pretty cheesey, but it's true. The M's came through with the lumber today to back Kuma, even though he might not have needed it. Every single player who had an at-bat today for the M's (except for Brad Miller, and you'll find out why later) had at least one hit on the night. In total, the M's had 14 hits. I don't care who you're playing, you're gonna win a hell of a lot of baseball games when you do that.

Kyle Seager and Robinson Cano also pitched in with a homer each. Seager's was a two-run shot that put the M's up 3-0 (my favorite part of the video is when Blowers says "Uh-oh" right when the ball is hit), giving Iwakuma plenty of support to work with. Late in the game, Cano's three-run bomb (on a pretty tough pitch to get around on, too) left nothing in doubt and all but cemented the win for Seattle.

It wasn't just the pitching and the bats that came through in today's win, though. The Mariners also did plenty of work with the leather today. My favorite play of the day was Seager's great backhand throw and an even more impressive pick by Logan Morrison to get the out. In addition to that, Seager also started a pretty impressive double-play in the fourth.

At the end of the day the Mariners beat the A's in virtually every category pertinent to winning a baseball game. Believe it or not, the Mariners even won in number of ejections in today's game (grrr...). With the addition of Fernando Rodney to the AL All-Star squad, today was a pretty good day to be a Mariners fan. Time to sit back, relax, and enjoy some daytime baseball tomorrow as we watch our very own Seattle Mariners attempt to sweep the best team in baseball.

I love it. Go Mariners.