Local monarch demands tribute from neighboring clan, gets it

Felix Hernandez and Friday's 3-2 win over the A's.

Share All sharing options for: Local monarch demands tribute from neighboring clan, gets it

In the top of the eighth inning of tonight’s game, the newly-added upper deck section of the King’s Court tried to start The Wave. The M’s had just scored their third run of the game two innings earlier, pulling in front of the best team in baseball on an RBI double from Robinson Cano that sent James Jones home in good shape. They were now an inning away from opening the Most Important Series of the Year with a win, but perhaps most importantly, had washed the bad taste of losses to the White Sox and Twins out of their mouth with nice refreshing playoff-style baseball.

And yet, The Wave. The Fucking Wave.

I’ve seen The Wave happen a lot at Safeco, even though I only ever make it up to about five games a year. Usually it’s during a sleepy seventh with Lucas Luetge pitching to a four-run deficit, or when Miguel Olivo strikes out on an eye-level pitch as vultures circle overhead. The cascading cheers bounce off the empty green seats like a feedback loop, invigorating drunken fans with something to be happy about after spending $27 dollars to see Kyle Seager get left on second base every other inning.

Today, The Wave made it over about three sections, and then stopped. Again. Maybe four sections this time. Then breaking apart. See, down on the field, Josh Donaldson had just whacked a ball at Kyle Seager, who picked it out of the air like Bob Ross dabbing a star in the sky with white paint, starting the double play to get two quick outs into the eighth inning. Then, a real cheer erupting from the King’s Court, joined by the 32,000 with rapturous admiration for the best pitcher in the American League and his team in the middle of a playoff hunt. The Wave had just died with a whimper, and I realized I was at a baseball game with people actually invested in its outcome.

Whew, that was an introduction. It felt nice to write after this awful week too, let me tell you. And I’m not an idiot: I know they are going to do The Wave again tomorrow and maybe in September because baseball can be boring and the Mariners can make it seem even worse than usual. The Mariners aren’t supposed to be this good, and they probably aren’t, so it would be premature to pronounce it dead when it’s still kicking its feet on the sidewalk.

But today the Mariners faced their top division rival and their new shiny pitcher in a meaningful July baseball game, and they held on to a one run lead to move up a full game in the standings. That some people were trying the wave can certainly be forgiven. These are the Mariners, after all. But that the great majority of fans were dialed in to the game and ignoring The Wave is pretty neat for once.

Tonight’s Felix win started off a bit dicey, though. After Steven Vogt homered in the second at-bat of the game, Josh Donaldson singled, moved to second on a groundout by Brandon Moss, and scored on a Jed Lowrie single. 2-0 A’s. Felix usually takes an inning or two to really get locked in, but not at the expense of two runs. But in the second, Logan Morrison worked Samardzija into throwing a whole bunch of pitches before depositing a fly ball into the right field bleachers, putting the Mariners on the board early. It felt strange after a week of anemic offense, like it wasn’t really supposed to happen. But it did. And now the game could really begin.

Felix worked through the third with three quick groundouts, and then it was Brad Miller’s turn to do something neat. There were a group of College Bros with aviators and Coors Light tallboys next to me debating Brad Miller’s slash line through a slew of fuckin’s and bro’s, noting that if fuckin’ the Mariners want to fuckin’ do something this year, they need to drop this fuckin’ guy and drop him fast. Then Brad hit a shallow fly ball into center field, put on the gas, and stretched it into a double thanks to the fact that the Athletic in the outfield wasn’t a person named Cespedes or Reddick. The Bros stood up and cheered louder than anyone else in the entire section. Happiness can be bought, folks, and don't let anyone tell you different.

With Brad on second, Mike Zunino grounded out to send him to third, wherein he scored on a sacrifice fly from the bat of Endy Chavez. Tie ballgame. Productive hitting. Offense. Sequencing. These are all nice words that are fun to type, especially when they describe what the Mariners did.

After the third, Felix really started to settle in, striking out the side in the fourth and keeping the A's at two runs through the rest of the game. He finished the night with eight innings of six-hit ball, with two walks and nine strikeouts. Felix Hernandez is going to start the All-Star Game. Felix Hernandez is going to pitch in a playoff baseball game. Today was just a little tease of all those things.

Still, it was a little scary. The game was tied into the sixth inning, and you couldn't help but feel that this game was moments away from slipping into painful, drawn-out extras. But with two outs, James Jones whipped a double, and scored from second after Robinson Cano bounced a hit right............here: 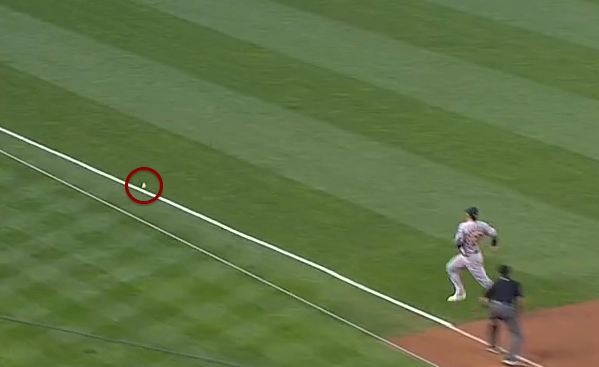 Yikes. That's right, the Mariners were half a centimeter away from potentially not winning this baseball game, and while some may prefer a no-doubt slug fest to stab at the AL West champs, just think about how many well hit balls met White Sox and Twin gloves this week. A win is a win, and the M's currently have 50 of them, centimeters be damned.

Now of course, it would be remiss to finish this whole thing without talking about Fernando Rodney's ninth inning, which ranks as an unheralded masterpiece in Hall H of the Fernando Rodney Experience Museum. After Felix escaped a few late innings with a safe pitch count, many were hoping LLoyd would leave the King in to get his first complete game in what seems like years. But no, it was an untucked jersey in the eighth and Rodney to close this one out.

After Endy Chavez grounded into a double play to end the eighth, Safeco's jumbotron cut to a black and white shot of Rodney warming up in the M's bullpen. Over this, someone played a low, ominous droning hum, ostensibly to instill fear into the hearts of A's batters ready to give their team the lead but instead instilling terror into the 32,000 M's faithful standing in line for the slaughter. It had been all too long since a meltdown. It had been the perfect game to ruin. Something was in the air, palpable, and it only seemed like a matter of time until it all came crashing down. You know, back to The Wave and all.

Rodney dug in and got Jed Lowrie to pop out to Robinson Cano in the middle of right field. One out. Then, a walk to Derek Norris. Yoenis Cespedes pinch hit for Nate Freiman, and Norris took second on a wild pitch. Rodney was near 20 pitches. It's not that he was pitching poorly--in fact, he was pretty much doing what he always does: throwing a bunch of junk wherever the hell they would end up in order to force a strikeout or poorly hit desperate attempt at getting on base. Except these are the A's. They wisely let Rodney throw wherever the hell his pitches ended up, and a lot of them ended up out of the zone. Heart Attack High. On pitch 20, Cespedes made good contact with a 97 mph fastball over the center of the plate, and somehow--some way--Endy Chavez was there with the grab. Two outs.

Nick Punto came up to bat and forced Rodney to throw six pitches. Three of them were balls, all in a row. Actually, honestly, four of them were. The last four pitches, that is. All balls. Except the last one appeared to get just enough of the tiny itty-bitty corner of the top of the zone, and was called a strike just as Punto was throwing his bat to walk to first. Then it was a helmet flying through the air, violent swearing exchanged, two ejections (after the game had ended), and one, single, beautifully framed pitch from one of the best defensive catchers in the entire league. 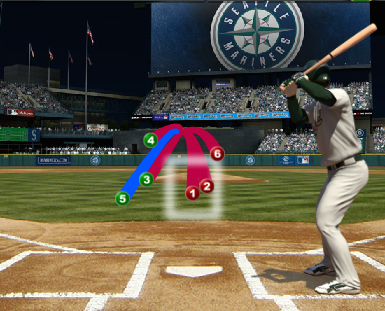 With this, the Mariners beat the A's 3-2 today, and you're going to hear a lot about how they lucked into the outcome thanks to a bad call from a blind umpire. But the truth of the matter is that Zunino got that strikeout to end the game, and that is an incredible skill that he brings to this Mariners team, a skill perhaps more valuable than a lot of other, more tangible things players bring to the table like stealing bases and outfield routing and "veteran leadership." I can absolutely understand how frustrating this outcome must be for A's fans. But I also understand that this team's franchise catcher just pulled his signature move tonight and it helped win an important baseball game.

Now isn't all that better than The Wave?