It's time, again, for the Mariners to get off the mat

Share All sharing options for: It's time, again, for the Mariners to get off the mat

We've been here before. This feeling, this "ship be sinking" feeling is not unfamiliar. In past years, there's normally one especially tough stretch—always early—that made fans think "well, this is it, here goes the season." This year, we've been lucky enough to have three or four.

That eight-game losing streak was a doozy, and then there was that four-game slide in mid-May, a five-game clunker in early June that I'd honestly forgotten about—and now losing five of seven to two of the American League's worst teams. This last one has a different feel because of what looms next, and the fact that there's just more people around to feel anything about it.

Because of this growth in the fan base, or maybe it's just an increased awareness among it, you don't have to go far to find someone willing to proclaim the season will be over by Sunday. You know what? It sure as hell feels good to be holding down a playoff spot when your season is on the brink.

And why do they hold down that spot, why do the Mariners stand here now—with these players—looking down at a good chunk of the American League? Luck and timely hitting have played a role, certainly, but a big part of it has been resiliency, the ability of this team to not think like the fans who believe this is all going to hell. Because that'd be crazy.

As I thought last night, while leaving the game, about how this ability will be tested now more than ever, I recalled something manager Lloyd McClendon repeated over and over when he first got the job.

In the Seattle Times:

"If you want to be able to cross the ocean, you’ve got to take your eye off the shore," McClendon says. "If you keep looking back, you’re never going to cross that ocean. We’ve been beaten down, but we’ve got to get up off the mat and start fighting back."

In The News Tribune:

"In order to be successful at this game, sometimes you’ve got to fail and get knocked down on the mat," McClendon said. "But at some point, you’ve got to get up and start fighting back. I think it’s time for some of our young pitchers — particularly in the bullpen — to get off the mat. Let’s find out what you’re made of."

"I've learned to enjoy the journey,'' says McClendon, the Mariners' seventh manager in six years. "I've always been a resilient person. I take my blows, get off the mat, and move on.

This all, of course, falls under McClendon's "I want my players to take on my personality" mantra. And they've done that. The Mariners have been giving a standing eight before, they've crumpled to their knees at times and they've even been knocked straight on their asses once or twice.

Each and every time, they've gotten to their feet, they made it to their corner—and when the time came, they answered the bell.

This, right now, this is something else. This is a series unlike one Safeco's seen in a while, and it's a test unlike any the Mariners have seen this year.

And I don't know how it's going to go. I'm not going to tell you that it's all going to be alright, because I have no idea. I don't know anything more about baseball than most of the people who read this site—though I'm sure that's no surprise. I just try to be level-headed and err on the side of optimism, because if I didn't, I couldn't do this. Baseball would be too much for me if I thought it was all going to hell.

Still, I know there are plenty of people who feel differently out there. I interact with them all the time. And though I'm not some sage when it comes to baseball—or maybe because I sometimes act like I am and owe people an explanation—these people come with the questions. Last night, standing at 3rd and Seneca, frustrated as hell and waiting for the D Line home, I had this Twitter exchange. 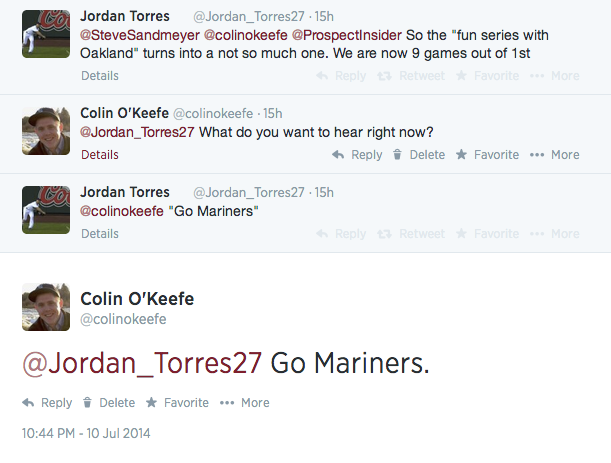 And that's where I am right now. Go Mariners. Go damn Mariners.

Like I said, I don't know how this is going to go, and after the last time I wrote something substantial, I'm sure as hell not going to try to tell you I do.

But this, all of this, this is baseball. Going from pure elation to concern to imminent doom to determined hope in the span of 10 day days—this is why we do it. Tonight is why we do it.

This series against Oakland could be awful, it could be incredible—or it could be somewhere in the middle. I don't know, but it's eighty-something degrees outside, it's Friday and Felix is on the bump. So maybe it isn't only time for the Mariners to get off the mat, but their fans to do so as well. I'm not going to tell you what to do, but this is still the type of series we've been waiting years for.

For the Mariners themselves, this is no longer an opportunity, but a test. Will they head into the break with the sense of doom waiting for them upon their return, or will they find their feet and throw their best punch? I'm excited to find out.

Let's do this, let's have some fun.