This city is used to depression when it comes to their sports teams. Ready to expect the worst, fully prepared for the bottom to fall out, skeptical that anything gold can stay. A championship from one major team in this city didn't completely remove the hand-wringing from the other's fans. It doesn't feel natural to let optimism take over when it comes to the Mariners, to throw out all reason and probability. Especially when the team plays a getaway game against one of the very best pitchers in baseball, tossing out one of the very worst starters in return.

But that's why we always watch, we always follow. We always hope that the odds are wrong, that they don't apply on any given...Monday. Even the worst teams still win 35% of the time, many coming in games like today's, in which victory seemed beyond improbable. But far too often, it has felt, factual or not, like the Mariners rarely win the games they're not supposed to, and often lose the ones they are.

If the Mariners were in the middle of another 100 loss season, there would be no reason to watch a game like today, even in the middle of June. Recent years have, for playoff rooting purposes, ended well before now. The Mariners have certainly not been in a position like this, thanks to the second wild card spot, in many years. 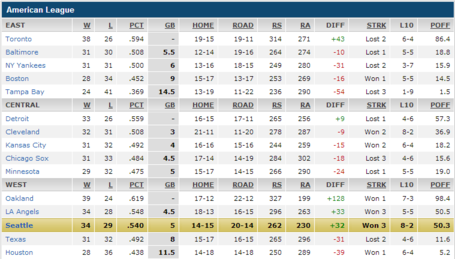 Grab a coin. The season will be halfway over before much longer, and the Mariners have a 50/50 chance of making the playoffs, as currently constructed. With no upgrades at the deadline, no return of Taijuan Walker or James Paxton, and only a possible return of Corey Hart or Logan Morrison. A 50/50 chance with some lineups like today's, riddled with inexperience and questionable talent.

The Mariners, right now, are good. Flip the coin. If it's tails, chances are you'll take what's already been a very fun introduction to summer, and a feeling of euphoria that hasn't paired up with Seattle's spectacular summer weather in many years. A tease that still satisfied. But if it's heads, the Mariners will get a legitimate chance to fight for the World Series against the best teams in baseball, and this city will explode.

The M's playoff odds keep going up, even when the odds of winning are stacked against them. Erasmo Ramirez, barely saved by plenty of offense behind him in Atlanta, facing off against one of the game's best pitchers in David Price. An east coast getaway game with an extremely long flight in front of them before they face Masahiro Tanaka tomorrow evening in Safeco Field. Willie Bloomquist leading off, Michael Saunders out, and John Buck as the DH. Whatever the odds were on winning this game, recent string of success aside, it would have been a hard sell that this is a game the Mariners would win.

But they did, cashing in on a bases loaded two-run single from Robinson Cano to nick up David Price early on, and somehow, miraculously, it held. The Mariners shut out Tampa Bay for the second game in a row, win their second Erasmo Ramirez start in a row, and head home to Seattle a whopping five games over .500 when the most rational minds would have pegged them for three at best going into this trip.

Ramirez made it through 4 2/3 innings unscathed, despite his best attempts to give runs away. He was sharper than his outing in Atlanta, though this time he limited the damage by keeping the ball out of the heart of the plate. He couldn't paint the black at all, allowing five walks to go along with five strikeouts. Ramirez's control wasn't great, but he did manage to command his secondary offerings much better than he did in Atlanta, generating quality swing/misses on his change. He escaped multiple jams (including a crucial reviewed bang-bang final out in the 4th) and generally avoided hard-hit balls. It's a bizarro version of Ramirez, walking a bunch of guys while keeping the ball out of the middle of the plate. A night and day approach from the last time we saw him, and somehow far more effective. It won't work very often, but today the Rays simply could not make Ramirez pay when they had their chances.

I can't help but wonder if this was a result of instruction from Rick Waits, who made four visits to the mound when Ramirez was on the hill. The last of which, following a James Loney double in the 4th, seemed to instruct Ramirez to simply not allow Ben Zobrist any pitches he could hit, allowing Joe Beimel to finish warming up in the bullpen. Ramirez did exactly that, giving way to Beimel who locked down another potential mess.

While Ramirez had his share of dangerous situations, the Mariners made David Price pay on far fewer mistakes. Price was outstanding, but hit with some bad luck yet again. James Jones loaded up the bases in the 3rd with a marvelous drag bunt, allowing Robinson Cano to line a two-strike opposite field single into left, scoring two before Stefen Romero brought the third and final run home on a fielder's choice. That was all the Mariners needed today, as Price cruised the rest of the way, going eight strong with ten strikeouts.

The bullpen shut things down for the Mariners yet again, as Joe Beimel, Dominic Leone, Danny Farquhar, and Fernando Rodney held the Rays to a singular hit after Ramirez exited in the 5th. Before the year began, this bullpen had the makings of something extremely unnerving, with only a few guarantees of quality performers. Leone wasn't in the picture, Beimel hadn't been good in years, Wilhelmsen looked broken early on, and Furbush was shaky. But things have settled in nicely to make this one of the Mariners biggest strengths. Leone's dominance and ability to pitch multiple innings, like Farquhar, has shortened up the game for the Mariners during their recent stretch of success. Fernando Rodney has only allowed four baserunners since the May 13th blown save, and today makes it four straight perfect outings from him. He's basically been exactly what the Mariners paid for, if not a little better. The Fernando Rodney experience has become boring and predictable.

Nothing makes sense, and everything is awesome.  The day after the Mariners scored five runs, Erasmo Ramirez walked five batters. He struck out five more. The Mariners held the Rays to five hits, and now they're five games over .500 with a 50/50 chance of being a playoff team for the first time since 2001.

Look at that coin in your hand. Today, it came up heads. Tomorrow, it might come up tails. On September 28th, it could come up either way. One thing is for sure -- I'm watching every single rotation of that quarter as it flies through the air.