Share All sharing options for: Mariners confuse Tropicana Field for hotel, sleep their way to 4-0 loss 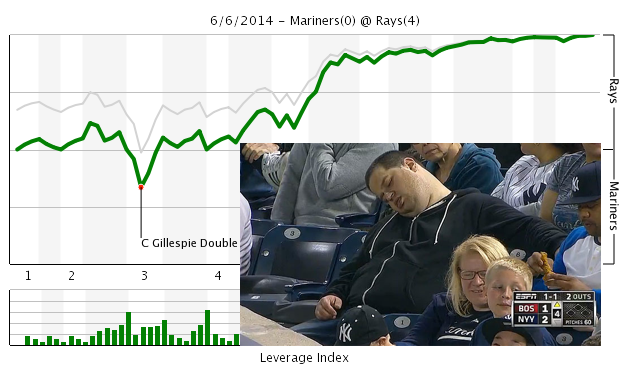 Well what we had here was one of those games. Wait wait wait, let me try that again.

Well, what we had here was one of those games. Yes, that's better.

I live in Portland, and nobody here likes baseball. Well, that's not quite true. Jeff likes baseball, and he lives in Portland. My nearest sports bar has this one old guy with a Red Sox hat, and I would guess he's at least seen one baseball game in his life. There are some high school and college baseball teams in Portland. Or so they say. But for the most part, nobody really seems to like baseball much. I sometimes ask my friends why they don't like baseball, and the conversation always inevitably goes something like this:

Friend: No, dude, baseball is awful. It's so boring. I like going to games, I guess, but watching baseball on TV is literally the worst form of torture I could possibly imagine.

Me: What? No way. Baseball can be slow, sure. But come on, Yasiel Puig! Have you ever watched Miguel Cabrera hit a ball 500 feet when it has dirt on it? The King's court! Perfect game! It's strategy, about pitching matchups, blah blah blah blah

Friend: *mutes tv playing either football or basketball* what oh yeah sure man.

Every time. And yet today's game was one where you would have serious trouble defending the game of baseball to one of the unconverted. On one hand, you could argue that it's exciting that Erik Bedard had eight strikeouts over six innings in his age-35 season where he wasn't even supposed to be in a team's starting rotation. But on another, perhaps more accurate hand, Erik Bedard competently pitched six innings and that's about as exciting as a cardboard box from Home Depot.

The game crawled on with no score until the fourth inning. Bedard was pitching decently, but the Mariners were just ultimately looking sluggish, checked out. Part of the problem is that Lloyd stacked four lefties together in Miller, Jones, Saunders, and Cano. But that's also kind of a dumb excuse because platoon splits don't usually turn their counterparts into little league baseball players. The Mariners struck out 14 times tonight, and that's just awful.

The only really exciting thing that happened today was in the third inning, when Stefen Romero led off with a single and was sent to third on a Cole Gillespie double. Then there were three consecutive strikeouts from Miller, Jones, and Condor. This is probably the one moment where the lefty stacking got them, but I think what really got them was the fact that Brad Miller and James Jones happened. Look, I love them too. But are you honestly that surprised with this result?

On the defensive side, Chris Young was his usual baffling self, running into trouble early and often but somehow escaping unscathed nearly every time. After a clean first, he gave up a leadoff double to James Loney in the second, who was moved to third on a sacrifice bunt a moment later. Matt Joyce struck out, but then Young gave up back-to-back walks to Yuniel Escobar and Kevin Kiermaier. Then, magically, a popup from Jose Molina to end the inning.

The third inning was the same story, with a two out double followed by back to back walks from Young, one intentional. Then, a Matt Joyce ground out to escape. The Rays finally got to him in the fourth after another laundry list of damage, but somehow only got one run across in an inning that featured a double, advanced runner on a wild pitch, and a walk. This is textbook Chris Young. He exists in box scores to terrify you--today it was 5IP/7H/3ER/5BB. This, combined with an 85mph fastball and no dominant secondary stuff is a recipe for disaster. But like his famous 6'11" fastball release caveat we've all heard about a million times, he somehow does his own thing every day.

What Young is doing isn't exactly sustainable, and he's probably going to have a nightmare start soon. But somehow, he's been surviving on these on-paper meltdowns while only giving his team a three run deficit. How many Felix starts have the Mariners been down three? How many Iwakuma starts? Its more than just saying that, but the point is that these are no six-run-single-inning meltdowns. I don't get it. I don't know if I want to get it. Chris Young is weird. Long live Chris Young.

Joe Beimel came in and had a bit of a rough sixth, loading the bases with a double, intentional walk, and unintentional walk. He escaped the inning, and then Tom Wilhelmsen tried his best to replicate the whole adventure in the seventh with a run-scoring wild pitch and a fastball directly to the knee of David DeJesus. The Mariners would never threaten again until the ninth, when Robinson Cano led off with a single and stood to watch John Buck strike out. Kyle Seager grounded into a double play, which was a double play until the umpires noticed that Robinson Cano was tagged by an empty glove on the transfer, and he was ruled safe at second. Stunning! Drama! Ninth inning dramatics from Justin Smoak! Which, you know, consisted of a strikeout to end the game.

The game was quickly over and I can honestly understand how each and every one of my friends thinks baseball is just about the dumbest thing in the world. Today it was. It isn't always this bad, though, and we know that because we get to see fun things like Roenis Elias and Robinson Cano and Felix Hernandez. Adrian Beltre hates getting touched on the head, and Manny Machado almost fought Josh Donaldson today because he took umbrage to getting tagged too roughly. That's fun stuff! Watching Chris Young and Erik Bedard pitch a game against two terrible offenses in 2014 isn't exciting though. That's why they do this 161 other times, though.