It's June and Robinson Cano has two home runs post

The Mariners are 31-28, as good a time as any to talk about this elephant in the dugout.

Robinson Cano signed a very large, very long contract to come to Seattle to hit baseballs. And hit he has. As of this moment, he has 72 of them, good for a batting average of .330. We don't talk about the importance of batting average much around here, because, well, it's not all that important. But when you give Robinson Cano the old fashioned eyeball test, it's a nice reminder of what professional hitters used to look like when they wore a Mariner uniform.

The problem, of course is this:

It has been well documented that while Robinson Cano might be hitting, he's not hitting for much power. Yes, he has 17 doubles which most projections place him on a pace somewhere around 36 to 38 doubles, but that's still a five-year low for Cano. And then there's the two home runs. Indeed, after averaging better than 28 of them the past five seasons as a member of the New York Yankees, Robinson Cano has had the incivility to plate himself just twice.

It could be that some had elevated expectations. Even the most optimistic of projection systems saw Cano hitting about .285 with a slugging percentage around .460, hitting 22 home runs. This is in large part due to Cano moving from one of the worlds friendliest places to hit home runs as a left handed batter to one that was well below league average. Of course, also wrapped up in this was the fact that Cano is 31, and everything we've learned about hitter aging points to a slow, steady, deterioration. Even if you're a star hitter, that appears to be generally true. To borrow an image from the venerable Jeff Zimmerman on ISO and aging (this one is particularly fun, because of the differences in those two groups of seasons): 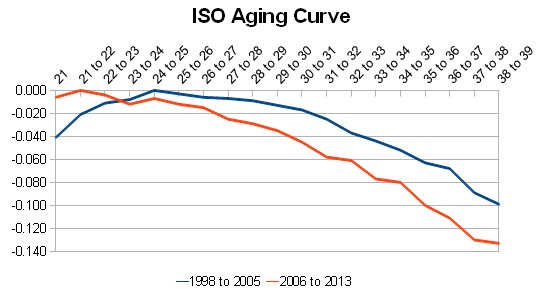 As granny used to say, "Dear, we're all dying. Every day. Have a cookie." Sigh.

But let's try to look objectively at Cano's current body of work as a Mariner, and a little about how pitchers are approaching him in 2014.

His line drive rate is up, and the eyes would corroborate that. His ground ball rate is up by 4.5%, which I wouldn't call a smoking gun.The fly ball rate is certainly low given his career rate and then -- needle scratch -- check that HR/FB rate. His HR/FB rate in the last three seasons has been 17%, 24%, 17%. Park factors aside, there's no reason to expect Robinson Cano to leave the yard just 4% of the time on the few fly balls he manages to hit. So has he been unlucky?

This chart, courtesy of the nerd factory at Fangraphs allows us to not only see the distribution of batted balls, but you can go ahead and mouse over the pretty blue dots to see how many times Cano has gone warning track and come up empty.

Maybe it's the park, maybe it's bad luck, maybe he's dying every day. But that looks like a goodly number of deep fly outs to me. However, if we borrow once again from the Kansas City great Jeff Zimmerman and his baseballheatmaps.com, we can look at the average distance of his home runs and fly balls over the past several seasons. Which yields this:

So maybe not so unlucky. His average distance on home runs and fly balls is just 274 feet, a five year low. Of course, should he hit a couple moon shots today, poof, irrelevant table. As for the angle, I included that just because I find it super interesting, although unrelated directly to his power output. The angle represents the range of possible landing spots on a -45 to 45 spectrum where -45 is the left field line and 45 is the right field line. On fly balls and home runs, Cano has gotten progressively more prone to going the other way, something that could become potentially problematic to his home run totals in a place like Safeco Field.

As for his opposition sixty feet six inches away, pitchers do seem to be approaching Cano differently as a Mariner than over the course of his career, and it's a bit counter intuitive on the surface:

As a Mariner, there's been an uptick in four seam fastballs Cano has seen and a pretty sharp decline in sliders. But perhaps opposing pitchers are more than willing to let Cano swing given a lack of Stefen Romero fear or something of similar ilk. Or, perhaps they've gotten wise to the fact that Cano slugged .616 with an ISO of .326 on the 284 sliders he saw in 2013. Of the three most likely pitches he saw last year, it was far and away his favorite to feast on.

This is particularly evident against right handed pitchers, representing almost the entirety of the drop in usage. And in fact, right handed pitchers, even when they are ahead, appear entirely reluctant to give him too much in the way of junk. In 2013 when right handed pitchers were ahead in the count, Cano could count on about 34% four seam fastballs. In 2014, it's almost 50%. It's hard to determine why, and what's perhaps more important, why it hasn't allowed him to hit for a Cano-esque power profile as he has in the past.

As for the power, I'll leave you with this gif nugget comparing his 10x10 zones last year to this year:

There's an obvious decline in the middle of the plate in 2014, but there is a sizable disappearance of power up and over the plate. What has historically been wheelhouse territory for Cano has been mostly barren so far this season. And if you're inclined to be irritated by his ground ball rate, you can target that zone as part of the problem:

Yes, there's a small sample size in play here, but you can see those up and over the plate offerings have turned into ground balls at a pretty high rate in comparison to 2013.

I can't say I have a tidy bow to wrap around this. Robinson Cano is hitting, and he's hitting quite well, even leading all second basemen in on base percentage. But his lack of power production has begun to become a thing, for better or for worse. While it is a little easier to ignore it as the Mariners are winning more baseball games than they are losing, it is nevertheless a story that won't go away until Cano makes it go away. I get the sense that once he adjusts to how pitchers are approaching him, coupled perhaps with a little better luck on fly balls, Cano is going to have a stretch that makes all this talk about his power early season folly and articles like this one will be widely panned. And I would very much welcome that.