The Mariners' strength of schedule problem

The Mariners have had a pretty rough schedule so far this year. The good news: things are about to get better! The bad news: after that, things are going to get worse!

Share All sharing options for: The Mariners' strength of schedule problem

Recently, you may have found yourself reading about the remarkable parity of the American League. If you haven't, click these three links.

Recently, you have definitely found yourself reading about the remarkable parity of the American League. Only three clubs are more than three games back from a Wild Card spot, which means that at any moment any of the other nine teams can go on a five-game win streak and find themselves in the hypothetical playoffs. Hey, look - that's what the Mariners just did!

Unfortunately for the M's, even in this year's league of remarkable parity, not all teams are created equal. And two of the AL's four best find themselves in the Mariners' very own division. The incredible Oakland juggernaut looks like a lock to win the West again, and the Los Angeles Trouts are pretty obviously the Best of the Rest on true-talent. Which leaves the Mariners, along with the other seven mediocre AL teams, scuffling for just one playoff spot - with the added degree of difficulty that they have to play Oakland and Los Angeles more than almost anyone else.

From Mariners.com, the June schedule: 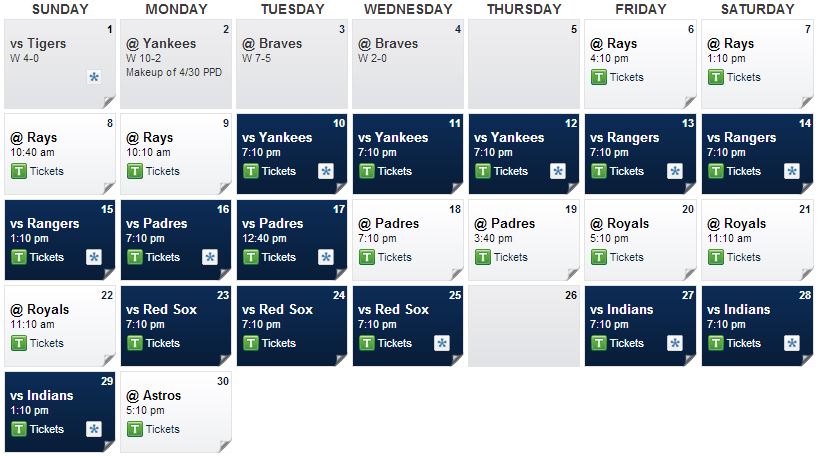 As you can see, and as Colin mentioned recently on Twitter, the Mariners won't see another current playoff team for the rest of the month. Of the teams they'll face in June, only the Yankees are currently above .500, and that's only by one game. Furthermore, the teams they'll play against on the road all really suck. The Royals are the best of the bunch at 28-30, but by Baseball Prospectus' third-order wins they're actually the worst team in the American League. Against all of the more talented teams, the Mariners will have home-field advantage, which has been estimated to be about as valuable as replacing Justin Smoak with Miguel Cabrera. So there's that. 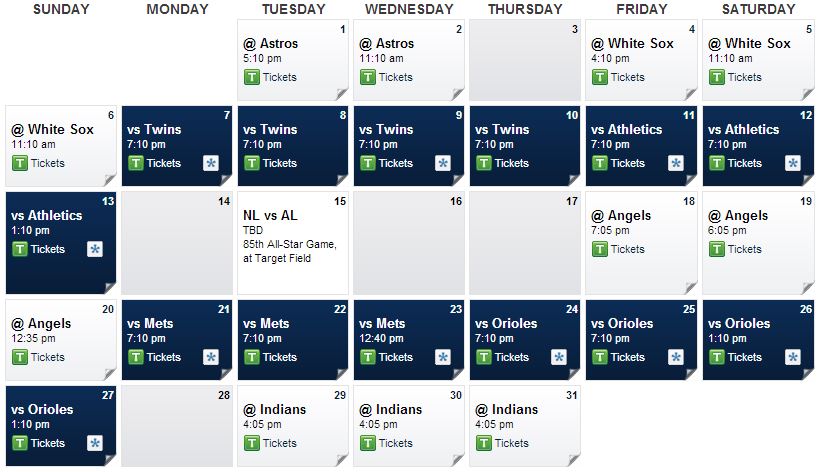 The All-Star Break is sandwiched by two series against the Athletics and Angels, but the rest of the month is again remarkably easy, featuring no less than ten games against AL Central also-rans. Also, there's a homestand against the mediocre Orioles and Mets.

Now, we absolutely shouldn't get ahead of ourselves here. (The last time I said the Mariners had an easy stretch coming up, they went 1-5 against Miami and Houston.) But Bill James' log5 formula, which makes up the bare bones of Fangraphs' Game Odds, says that the Mariners should be expected to win 26 or 27 of their next 50 games, which would leave them solidly above .500 by July 31st and thus trade-deadline buyers for the first time in forever.

That, unfortunately, is where the good news ends. Because after the trade deadline, things get a little hairy. The only punching bag the Mariners'll see in August is the Phillies, but they'll also have a two-week stretch featuring series against Atlanta, Toronto and Detroit. And September... whoo boy. 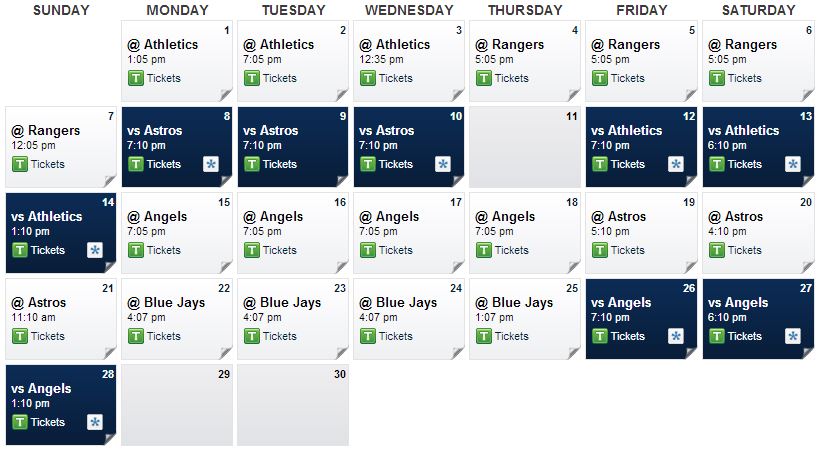 I mean, holy shit. The only team the Mariners play in September that isn't from the AL West is the Blue Jays. A dozen games against Oakland and Anaheim. Two road games for every home game. It's, uh... it doesn't look fun.

Which is why the Mariners' relatively easy June and July is both a blessing and a curse. Riding high into the trade deadline has its benefits - like making the team fun to watch and to root for - but it could also be a little too much encouragement for a front office that seems desperate to win as soon as possible. The Mariners obviously shouldn't be deadline sellers, unless something goes horribly wrong, but they also have to be careful of what they buy.

The simple reality of the Mariners' situation is this: the best they can hope for in 2014 is a one-game playoff at home. If they don't make an upgrade at the deadline, they could crash on the rocks of a nasty September schedule, but if they buy a player who won't stick around past the end of the season they could end up paying a valuable prospect or two for the privilege of losing a coin-flip Wild Card game. I'd advise them to buy smaller upgrades with lesser prospects, but the last time this franchise tried that they sent Shin-Soo Choo and Asdrubal Cabrera away for a crappy DH platoon. They just... they need to be careful, is all.