Mariners deathspiral continues its reverse climb with win over Braves

Hisashi Iwakuma fans seven and the Mariners are tied for the first wild card spot. It's June.

Share All sharing options for: Mariners deathspiral continues its reverse climb with win over Braves

I read an article this morning that claimed scientists have found that our brains have been wired through thousands of years to function properly when we are engaged in positive thought. I'm not really sure how they arrived at that conclusion, or even how you measure positive thought, but I do know one thing: it's June 4th and the Mariners are playing competitive baseball in the playoff standings. I don't know if it's positive thinking or luck, or maybe a little bit of both. But whatever it is, it's working.

It shouldn't, either. For the second time in the Mariners' current five-game winning streak, Lloyd put out a lineup that confused and bewildered many an enraged fan commenting on the internet. Ha! Who am I kidding, that happens every day! But seriously, the Mariners beat the Braves today in a game where their first two hitters were Willie Bloomquist and Endy Chavez, with Stefen Romero batting cleanup behind Robinson Cano. Michael Saunders sat for Cole Gillespie. It wasn't quite as bizarre as Saturday's lineup, and I'm not criticizing it, but it was certainly something capable of furrowing an eyebrow or two.

But it didn't matter. It isn't mattering. Somehow, the Mariners are winning games where they start players few fans seem to want in their starting lineups, and it's propelled them to the best American League playoff odds outside of the respective division leaders. And what's even weirder is that the players causing the stomachaches are often the ones doing the brunt of the work.

Saturday: Stefen Romero, John Buck, Cole Gillespie, and Willie Bloomquist combine to score the Mariners' only runs in the second and fourth innings.

Sunday: Endy Chavez and Willie Bloomquist score the only run Roenis Elias would need to secure the complete game shutout.

Monday: A more sensible game with Kyle Seager blowing the hell up, but it wasn't even supposed to happen on this day so we can ignore it.

Today: Cole Gillespie and Stefen Romero do the only needed damage.

I...I don't know. Whatever. It's working, and despite the fact that people actually went out of their way to complain about lineup construction on the internet at 7:00 in the morning today, LLoyd got the last laugh.

Hisashi Iwakuma got off to a bit of a rough start, needing 56 pitches to get through the first three innings. Home plate umpire Marty Foster had a somewhat portable zone at times today, and while it didn't get the better of Iwakuma, it forced him to throw a few extra pitches early on. But the biggest problem was just the fact that he didn't really settle into a groove until the second half of the second. Also a little luck. Look at this at bat from Mike Minor, who is a pitcher: 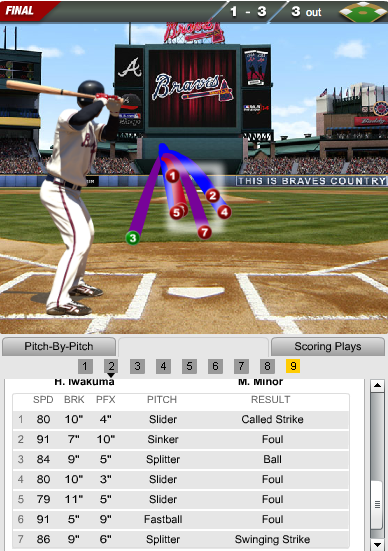 If Justin Smoak did this we would be using the word "progress" and maybe "wait, what?". But no, it came from Atlanta's starting pitcher, so...maybe we can still use that second phrase. Still, Iwakuma settled in nicely in the third despite needing a ton of pitches to get the top of the order in Jason Heyward, B.J. Upton, and Freddie Freeman, who combined for two grounders and a strikeout to take the game into the fourth. And then, Iwakuma settled down and did his thing.

The Mariners didn't get their first hit until the top of the third inning, with Cole Gillespie whipping a second pitch fastball into centerfield. Nothing came of the inning outside a fun at bat from Hisashi Iwakuma that saw three strikes from Minor and a slow swinging pitcher in his early thirties do his best not to hurt himself. Cano then led the fourth off with a single, and was sent to second after Stefen Romero hit one for himself. Laptops flew in the air all across the Pacific Northwest at this moment, and the ten thousand tweets chastising Lloyd for protecting Cano with Romero were individually logged by the Library of Congress for future use. Mostly for when the Mariners are in the playoffs this fall so as to make everyone look foolish for only pointing out what made total sense at the time.

After Kyle Seager and Mike Zunino got two quick outs, Cole Gillespie singled in Cano for the first run of the game. Jonathan Carter, a 38 year old software designer watching the game on the couch in his Bellevue condo, joined the laptop throwing party in dismay, unable to reconcile his logically process-oriented brain with what he was seeing on television at the time. It crashed into the ground, keys scattering across the floor, breaking into two pieces. When he went to pick it up, he noticed the fall had somehow sent his web browser to Michael Morse's Fangraphs page, and now Carter's broken 13" Dell Inspiron had "11 HR" and positive WAR permanently burnt into the bottom corner of the screen. It was ten in the morning, and thought about starting to drink early. He did.

The rest of the game saw scattered hits as Iwakuma started to strike out Braves hitters en masse, abandoning his slider for a whole bunch of fastballs. Based on a few postgame interviews, it sounds like Mike Zunino or LLoyd told Iwakuma early in the game that his slider wasn't hitting the spots it usually did, and that he should focus more on a mix between his splitter and sinker. Well, whatever ended up happening worked, because once Iwakuma settled down he was back to his usual self, sitting around 90 on his fourseamer and hanging out in the eighties for his other fastballs. He didn't abandon the slider altogether, but instead kept it early in counts. By the seventh, his final inning, he didn't need to be selective anymore.

He even had a walk in the fifth, as well as a successful sacrifice bunt in the seventh. His walk came on six pitches, as he was specifically told by LLoyd to just walk out and look at the ball. Somehow, it worked. Then in the seventh, he knocked Brad Miller over to second, who walked to lead off the inning. Nothing came of it, but the little small ball, National League twinkle in LLoyd's eyes radiated to full blinding capacity stored under his sunglasses, and the Mariners may never lose a baseball game again.

Iwakuma ended the day with 96 pitches and didn't come out for the eighth because it's really humid in Georgia and it was still only his seventh start, so whatever. Yoervis Medina had a clean eighth somehow, and Rodney etched a surprisingly drama free ninth, despite an early well-hit flyout from Freddie Freeman. Game over, 2-0 Mariners. Lost in all this is that Mike Minor had himself a really great game too, striking out 10. Yes, Mariners, yes strikeouts. But Minor hasn't exactly been pedestrian himself, notching a 3.4 fWAR season last year. We can complain about another low-scoring win, but they managed to pull it off regardless.

The Mariners get the day off tomorrow, and the national media is starting to notice them on the way. Buster Olney just had Kyle Seager on the Baseball Tonight podcast, and the first thing he talked about was how the dugout culture behind Lloyd feels in part responsible for the recent success of the team. I wrote about that a week or so ago and honestly felt like I was kind of grasping at straws a bit, but it looks like it's actually working, crazy lineups and all.

Friday will be June 6th, and on that day the Mariners will play a meaningful summer baseball in a game featuring Chris Young and Erik Bedard. It's 2014, and that is a real sentence on the internet.