Nick Franklin sent back to Tacoma, has a lot to work on

The Mariners don't know what to do with Nick Franklin, and it's hard to blame them.

Share All sharing options for: Nick Franklin sent back to Tacoma, has a lot to work on

Erasmo Ramirez is starting tonight, which means somebody had to go back to AAA now that the move has been made official. Given that Endy Chavez has started every game since being recalled, Stefen Romero seemed to be the outfielder clearly out of favor, overmatched and poorly utilized. Instead, it's Nick Franklin, and the Mariners will carry six outfielders for now.

I'm not entirely sure what the Mariners are doing with Franklin. They clearly don't think he can play shortstop at the major league level, or he would have gotten more than three starts at the position. They don't think he's better long term than Brad Miller either, or he'd be starting over him. They don't like him more than Stefen Romero in a corner outfield spot, or he'd be getting Romero's starts. The Mariners, at this point, simply don't view Franklin as a full-time player, and they don't like him at any position other than second base.

His only possible role at this point is utility player, and he's in the same organization as the most quintessential utility veteran in the bigs, a guy who Lloyd McClendon personally requested the Mariners sign. If that's the role the Mariners want him in, then having him around with Bloomquist is understandably redundant.

Plus, Franklin simply hasn't hit. It seems a little unfair to judge him on these call-ups entirely given the scattered nature of his starts, but the results have been disastrous. His K rate this year is at 40.4%. His walk rate, cut in half from last year, sits at 5.8%. After Franklin cracked a triple in his first game of the year, he hasn't managed another extra base hit. He's looked even worse than last year, in many ways performing like an exaggerated version of the pull-obsessed, homer-craving hitter he turned into down the stretch of the 2013 season.

Whether the sample is too small or not, these games have happened, and it's all the the Mariners have to go on besides his performance in Tacoma. So why can he destroy the minors but fail miserably at the big league level? The book is out on Franklin in the majors, and pitchers can locate better. Even if minor league pitchers know Nick Franklin loves to fly wide open from the left side, trying to yank the ball, most can't always stick the ball on the outer half with any consistency. Major league pitchers can not only hit that spot, but they have enough plus secondary stuff to keep him off balance. Franklin hasn't been able to adjust to that better stuff in his promotions, and it's left him as a guesser - swinging wildly at sliders away and watching strike three right down the middle when it's the opposite of what he expects.

Take a look at what right-handed pitchers are doing to Franklin, courtesy of Baseball Savant. Away, away, away. 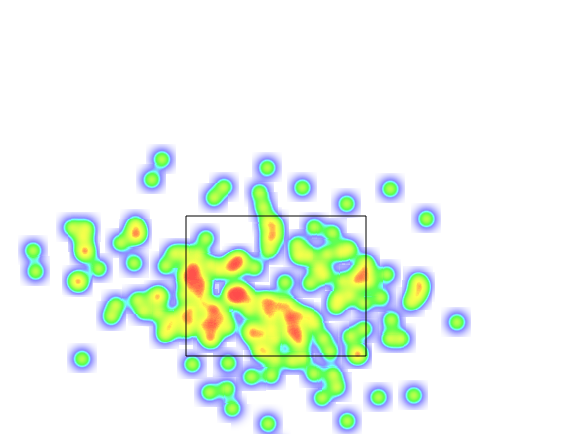 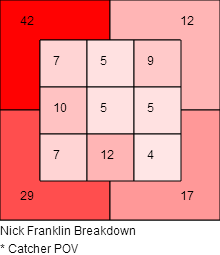 They know how badly he wants to turn on one. Franklin keeps waiting for it, but it isn't coming. When it does, he hasn't been able to turn around on it. Even when it sort of does, like below, he can't connect.

Take a look again, and watch the hips. There's a reason he spins like a top after he whiffs.

This, on a two-strike fastball that Franklin should at least be able to foul off if he sticks with it. It's not even away. I use this pitch as an example because it's less obvious than all the times he's bailed out on sliders well off the plate from lefties. This is indicative of his problem even on fastballs in a region he should be able to make contact with.

Now we'll find out whether Franklin is a AAAA type player or not. The coaching staff has to fix this problem that's also plagued Brad Miller this year (and Dustin Ackley in the past) and get Franklin to quit his pull-happy ways, getting him back to the gap hitter he was when he first arrived in 2013.  Clearly, they haven't been able to fix Brad Miller this year, but then again, Howard Johnson fixed (in a way) Dustin Ackley last year in AAA when he was suffering from a similar issue, although Ackley made more contact. At some point, it's simply up to the player to turn instruction into results. We don't know what that instruction is, but we do know what the results are.

I wouldn't know what to do with Franklin either, so it's hard to blame the Mariners for shuffling Franklin up and down, hoping something clicks. He's too good for AAA, but right now he's way too bad for the majors. It's an issue thousands of players have dealt with before him, and thousands will after. Franklin has to learn from his failures at the big league level and work to fix them in AAA, not work for another promotion. It might be the only thing that saves his chances of contributing to the Mariners at any point this season.