43-38: Mariners successfully finish baseball game despite checking out in the second inning

The Mariners were one hit away from being perfect game'd today, losing to the Indians 5-0.

Share All sharing options for: 43-38: Mariners successfully finish baseball game despite checking out in the second inning 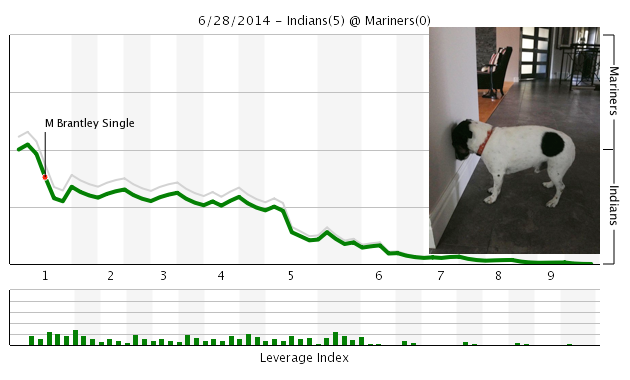 Well, the Mariners came into today's game looking better than they have in years with just about any category you can swing at them. Win/loss record. Run differential. Bullpen ERA. Amount of dollars given per game to their starting second baseman.

The thing is that all those things are true even after today's game, but it didn't make it any easier to watch Indians' starter Josh Tomlin pitch a one-hit, 11 strikeout shutout to a team that just had something like five consecutive multi-homer games earlier in the week. It's a conundrum, really. Everyone is a little surprised that the Mariners are so many games over .500 and in the Wild Card standings today, and part of the reason they are so surprised is that Stefen Romero and Endy Chavez and Cole Gillespie and Logan Morrison strike out all the time, and Mike Zunino can't really hit bendy things very well, and Dustin Ackley is still whatever the hell happened to Dustin Ackley. And the joke is on them--they can look at that team that sucks on paper and laugh at the standings, and the hope bustling through Safeco's concrete walls now much more filled with bodies excited to cheer on a baseball team that hasn't flirted with mediocrity since George W. Bush was the president.

But then this team goes and plays games like today, and while it's a little disappointing for sure, it's also kind of a nice reminder that hey, this team probably shouldn't be doing what they are doing right now. Everybody loses at least 60 games a year, and heck, the Mariners almost swept the Giants in Seattle the year they last won the World Series. But when whatever the hell a Josh Tomlin is comes to town and steamrolls all the Mariner hitters into thin little pancake patties that float down in the breeze like a Looney Tunes cartoon, you have to remember that these games have to happen every once in a while.

Roenis Elias wasn't his best today, giving up six hits over six innings, only striking out two with five runs. Elias' first two pitches were off the plate by a good, good margin, and although Michael Bourn managed to ground out a few seconds later, Asdrubal Cabrera followed up with a double and then scored on a Michael Brantley single right after. Then, another run on a Carlos Santana double. Elias seemed uncharacteristically flummoxed, and wasn't taking a ton of time between pitches. By the time he struck out Nick Swisher, his fastball was up to 97 but not a 97 that seemed threatening: it was a 97 that reeked of frustration and fury. And it was even doing something to his location. Look at this walk to Jason Kipnis: 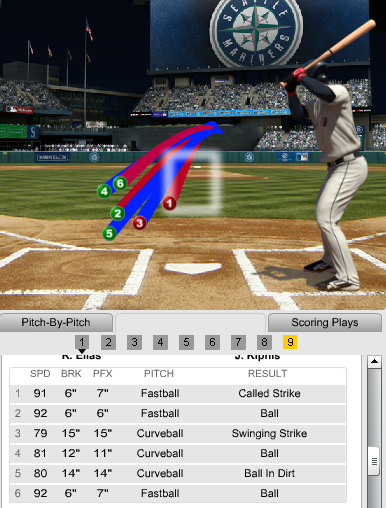 After this at-bat (and a mound visit), Elias calmed down settled in just a bit. Mike Zunino realized that the only pitch that was falling was his changeup, and lo and behold that was just about all he threw in the second inning, which only lasted 13 pitches. This is interesting--where Elias was frustrated and hitting 97 in the first, his fastball now was sitting at 92 and mixing well with his changeup. Fascinating what a little calm direction can do in moments of struggle.

Still, nothing happened through about the first four innings. And by nothing, I mean that the Indians scored in the first and then literally nothing happened--the M's were being perfect game'd into the fifth inning, broken up only by a Kyle Seager single in the top of the inning. Except then that became the only hit the Mariners had all game. Yes, Josh Tomlin was one hit away from a perfect game and struck out 11 Mariners hitters. I don't want to complain because this kind of stuff happens, but boy, at least another baserunner or two would have been nice.

Elias gave up two more runs in the fifth and a dinger to Yan Gomes in the sixth before getting pulled. It wasn't the worst Elias has pitched, but it certainly wasn't the Elias we have come to know and love. After giving up an RBI double to Michael Bourn in the fifth, Elias stood in his set position, ready to take Asdrubal Cabrera on and get closer to escaping the inning. Instead, he dropped the ball out of his glove, and as he reached down to pick it up, it was a balk. Bourn was on third with one out. By the time Elias was pulled for Dominic Leone, the M's were down 5-0, and they never even reached base again.

Bill Krueger is on my television right now saying that "this is all part of a maturation process" and "this is just something that happens in a 30-game season," and for once, I agree with him completely. Iwakuma and Felix and hell, Kershaw have had games like this before. And as we all know, Elias should be doing these three times a month on paper. We have nothing to be worried about beyond Elias getting even better than he is now, and that's not something we need to worry about, it's something everyone else needs to worry about. Onward and upward!

It's Felix day tomorrow, and soon we'll have the Fresh Prince back up (Monday, according to Lloyd). It could be worse. It could be a little better, but hey, one day at a time, folks.

1. Most ridiculous minor/major league promo you can remember:

2. Which bullpen arm would you be comfortable including in a trade?