Endy Chavez 1, sabermetrics, the Cleveland Indians, and time itself 0

The Mariners defeated the Cleveland Indians on Friday, 3-2.

Share All sharing options for: Endy Chavez 1, sabermetrics, the Cleveland Indians, and time itself 0

Last year, the Mariners re-signed Endy Chavez late in spring training because he was a warm body they could stash down in Tacoma, and presumably because they just spent an entire spring looking at different, younger warm bodies they didn't want. A week or so later, Michael Saunders ran straight into the wall and hurt his shoulder, and before you could close your eyes, spin around twice, and say "poor roster construction," Endy Chavez was wearing a hat with the letter 'S' on it.

He played in 97 games that season, and afterwards everyone breathed a huge sigh of relief because there was no way in hell the Mariners were going to build another roster without taking major-league outfield injury depth into consideration again. Well, lo and behold, it only took them until January to give Endy a phone call this time, and although we don't know exactly what words were said into each receiver that day, we do know that what was discussed was a minor league contract with a June opt-out date.

Doing lots of time-traveling here, so stay with me. In late May you were presumably checking your news feed for world on the inevitable Brandon Maurer send-down, which everyone knew was coming. What everyone didn't know was coming, though, was Endy Chavez. Endy Chavez, back on the Mariners. Two years in a row. Days before the opt-out date, which wait why didn't we see this coming?

Of course, what's different this time around is that the Mariners are actually good. When Endy Chavez played 97 games for the M's last year, they were languishing at an eternal 10+ games behind .500, and while it was certainly frustrating, it kind of made complete sense. The Mariners were suffering from poor play by a roster constructed poorly with poor players. Endy Chavez was just a byproduct of the engine running like it was designed. You knew you were dripping oil down the interstate because you taped your engine with electrical tape and twine.

This year, though, the Mariners are actually kind of good. Despite remaining roster holes, the team looked (and still looks) completely capable of wringing out all the water from sponges that aren't necessarily 36 years old on minor league contracts that could probably be DFA'd without being picked up by another team. So when word broke that Endy was coming back to the Mariners--the winning Mariners multiple games over .500--it felt like lunacy. It was like there was a complete polarized approach to 2013, one where the front office got to October and thought hey, yeah, that was alright while the rest of us were in the shower trying to wash off the shame from our bodies. Endy was the signal that none of them learned a damn thing, and that they were just making up all this shit as they went along using the same worn book from years before.

Well, see, the joke is on us because Endy Chavez did some wonderful things today. I know it doesn't work this way, but Endy has been worth -.2 wins this year. These, are of course, metaphorical wins comprised of a series of numbers meant to be plugged into some complicated equation made by someone much smarter than me, designed to determine the abstract value of a baseball player's performance over a given time period. Well today, Endy Chavez seriously and literally gave the Mariners 1 win by scoring two of today's three runs, including his first homer since last May. He was worth a win today. Endy Chavez. He got a win. He...Endy Chavez...win...good...hit...home run. The Mariners are good, my brain is breaking, and I'm having trouble typing anything resembling a sentence because it doesn't make sense but I feel good.

And look, I don't want to get down too hard on Endy Chavez. I'm really happy that the dude is 36 and still out there busting his ass, wanting nothing in return beyond a little playing time and a chance to goof off in the dugout. He's going to try and steal a base like he did today, even though he's 36 years old and probably shouldn't do that anymore. He's going to swing at things both outside and inside the zone, making a shit ton of contact with everything but offspeed pitches while owning a wRC+ of just 79. He's going to start all the damn time and we are going to cuss at Lloyd but then he'll end up justifying it with a first-inning double. Good for him.

It all started today in the first, when Endy led off with a single, stealing second during Kyle Seager's two-out at bat. Seager worked a 3-1 count, and then ripped a single into centerfield, scoring Endy from second. Dave Sims made some comment after all this about how he'd take Endy Chavez over any other 36-year old out there on the basepaths, and while it certainly fit the whole gritty persona that both Eric Wedge and now Lloyd have fantasized into being over Chavez, it was only his first stolen base of the season. Sometimes being the right side of chance can be a wonderful, celebratory thing. Sometimes it's just chance.

Chris Young was looking pretty good despite needing a bunch of pitches into the third inning. After walking David Murphy with an out in the third, he gave up a single to Michael Bourn and then hit Asdrubal Cabrera with a pitch to load the bases. Michael Brantley ripped a sac fly that Dustin Ackley tracked down with haste, caught right here: 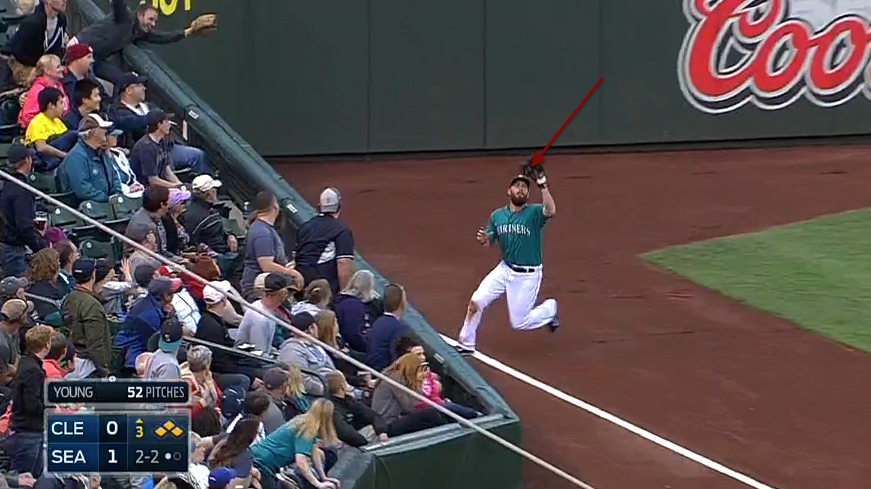 Now when you're running for a fly ball when the bases are loaded with Chris Young on the mound in the third inning, you should probably catch it every single time. But if this would have dropped foul, which seems safe to say it was going to, it's entirely possible the Indians' run wouldn't have scored. This is the other side of the random chance that gave Endy his first stolen base of the year. So many incredibly important events in these games hinge on the most absurdly lucky twists and turns, and when you have enough chances--you know, something like 97 of them--you're eventually going to be on the right side once in a while.

But yes, the Indians scored here. It was their only run for most of the rest of the game though, as Young settled down through the fourth and fifth innings in stride. In the fourth, Michael Saunders hit one of his two hits on the day, and was joined on the bases after one of Dustin Ackley's two walks of the day. Brad Miller came up and blooped the first pitch he saw into the outfield, blooped just enough to score Condor from second to give the M's a 2-1 lead.

The bullpen had some nice, quick innings after the Mariners got their second run as well. Joe Beimel came on to replace Young, who was sitting on 91 pitches after the fifth. Beimel struck out Carlos Santana and Jason Kipnis on ten pitches, and got Lonnie Chisenhall to ground out on two. Danny Farquhar struck out Yan Gomes and walked Nick Swisher, but reached his second out pretty quickly after a David Murphy flyout. Michael Born was up with two outs, and hit a ball into the infield that was bobbled by Logan Morrison on a routine play. Luckily, he had kicked it toward the pitchers' mound in his awkward bumbling, and as he chased it down some Benny Hill music played and Swisher was off for third. Somehow Morrison collected himself and fired over to Kyle Seager, who tagged Swisher out by half-of-a second and the inning was over.

Then, the Chavez homer. Here's what it looked like: 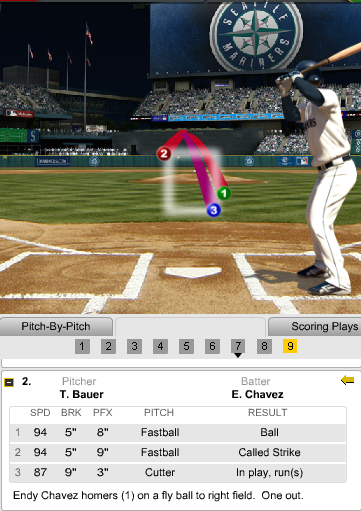 After the game, he told Jen Meuller that he didn't stop running until he was at second, because it took him that long to know it was out, which should just tell you what kind of a person Endy Chavez probably is. "I thought it was a line drive," he said. Then he kept running fast and was met with fawning admiration from his teammates. Roenis Elias furiously slammed his hand on the dugout fence with joy. High-pitched woos emerged from a tunnel of northwest green jerseys as ROOT's broadcast cut to the dugout camera. Kyle Seager wore the expression of an eight-year old giddy with joy as he unwrapped the Gamecube his parents had just bought him on Christmas in 2001, which was the year Endy Chavez made his MLB debut. 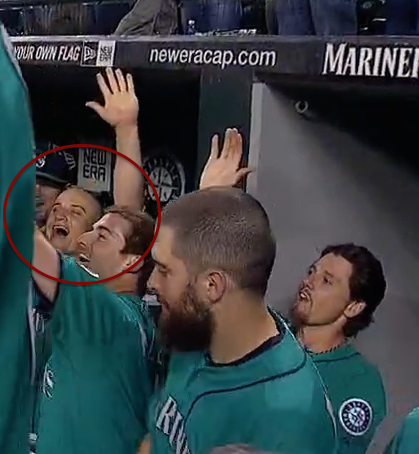 Rodney came on in the ninth with a ballgame set at 3-1 for his home team. After striking out Yan Gomes, he gave up a single to Nick Swisher, who was sent to second on a David Murphy groundout. Michael Bourn took a 1-1 count and deposited a changeup just past the reach of Michael Saunders, and for a moment, it looked like the Fernando Rodney Experience was about to have its third breakdown of the year. But Asdrubal Cabrera popped out to end the game, and the Mariners had won it, 3-2. They moved to 43-37 on the year and remain in sole possession of the second wild card spot.

So, alright, look. I've written more words about Endy Chavez here than ever before, and more than I hope to ever write again. I'm happy for Endy Chavez tonight. We all should be. You could see it on his teammates faces, too. But unlike that possible foul ball that Dustin Ackley caught in the third inning, we do know which side of the line Endy Chavez is going to fall on if he keeps playing this year. He's putting together a nice little June run here, and if the Mariners make the playoffs in October, it's going to be in part because he has hit .306 since June 15th with two doubles and two triples. That much is true. But Endy Chavez is 36 years old. He hasn't had a wRC+ over 100 since 2006. He's only walked twice this season, and they both came in the same game. The past two weeks probably aren't sustainable, and sooner or later it's going to be clear.

That he hit a home run today is certainly worth celebrating. That Lloyd has managed to squeeze this value out of him before he comes back to earth--fingers crossed--is worthy of a parade. And it might be part of why this team is doing what it is doing right now. So to you, Endy. Thanks. Thanks, and all I can think to do after all this is to give you some words written by someone else that came to my mind while you were rounding the bases today:

and to walk across the floor

to an old dresser with a

grinning at it all.

what matters most is