Mariners give one to Red Sox, forget how good they truly are

Share All sharing options for: Mariners give one to Red Sox, forget how good they truly are

Well today I was in Bend, OR and doing this thing where you follow all the breweries around on a map to get stamps in order to track your progress. I'm not sure why--bragging rights? You hate your liver? All I know is that sometime in the afternoon I was at Worthy Brewing and Tim Lincecum was on the television in front of me throwing a no-hitter.

He did, and then in the ensuing minutes ESPN proceeded to show a bunch of pictures of LeBron James wearing different NBA uniforms, some soccer guy biting a dude, and then a picture of Omer Asik. All of these were worthwhile sports stories and within reason to be covered by the worldwide leader in sports broadcasting, but one story they never talked about for even a second was that the Mariners have an absolutely bonkers run differential and just took a series from the World Series champion Boston Red Sox. Never mind that the Red Sox have been struggling mightily this season, or that they actually defeated the Mariners today. The point is that sooner or later, they are going to have to start talking about the M's, unless they decide to shit the bed in unison and ride into the sunset of mediocrity on a horse, backwards, with one boot untied.

The good news is that today's loss wasn't anything like that nightmare John Ford scenario I just described. The bad news was that Iwakuma was without a doubt the worst he has been all season, and you kind of have to worry if his neck injury isn't impacting him more than he is letting on. Yes, Iwakuma had a rough day, lasting only four innings and giving up eight hits, five runs, and three strikeouts. But the Mariners' bats actually showed up to limit the damage a bit and keep the game close until the final out for once. Last paragraph I said that ESPN is going to have to start covering the M's if they keep winning. Well, even if they lose like tonight, I think they will still have to cover the team. This wasn't one of the San Diego losses. Stefen Romero and Endy Chavez didn't golden sombrero their way to infamy today. This was a loss from a team that has some juice in the tank ready to be a contender. And if anything else, look at the box score and realize that if Iwakuma was even half of what he usually is, the Mariners had this game in the tank.

The Red Sox struck early as David Ortiz drove in two in the first. Here's the pitch: 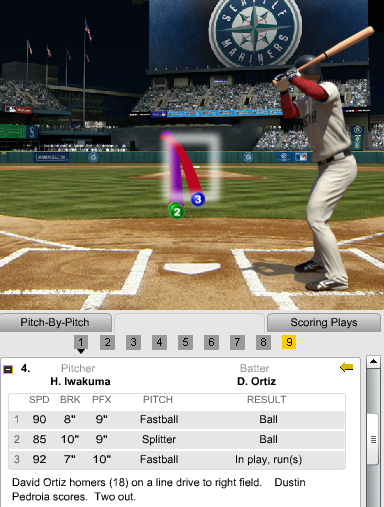 I'm not even sure this is a mistake as much as it's David Ortiz, who will assuredly and stupidly be the first DH inducted into the Hall of Fame, although he probably deserves it. But the Mariners got three of their own back in the second, after Kyle Seager sent one out again and Mike Zunino drove in Logan Morrison from first on a dinger of his own. Check this out:

Tonight was the first time in the history of Safeco Field (opened July 1999) the Mariners have recorded five consecutive multi-HR games.

Not too shabby. Still, Iwakuma continued to struggle, giving up two in the third after a leadoff double from Jackie Bradley, Jr. and singles to Daniel Nava and David Ortiz. The Red Sox added to this in the fifth after Lloyd pulled Iwakuma, and Tom Wilhelmsen kindly handed Kuma an earned run with a run-scoring double play that ugh. Ortiz didn't snag the RBI, but you'll have to check back in three weeks when he gets the official scorer to change the whole thing in his favor.

The rest of the game passed mostly without incident, seeing New Reliever Brandon Maurer get out of trouble and Brad Miller hit a solo dinger off Clay Buchholz in the eighth to bring the Mariners to within a single run. It was gone before his bat hit it, and even Brad knew it. I'm not sure anyone outside of Cano can rightfully flip a bat on this team, but with Crazy Legs himself only two months removed from being the worst hitter in town, this kind of trot to first looks like all but a middle finger to the Sox. Just look at his bat, and his face: 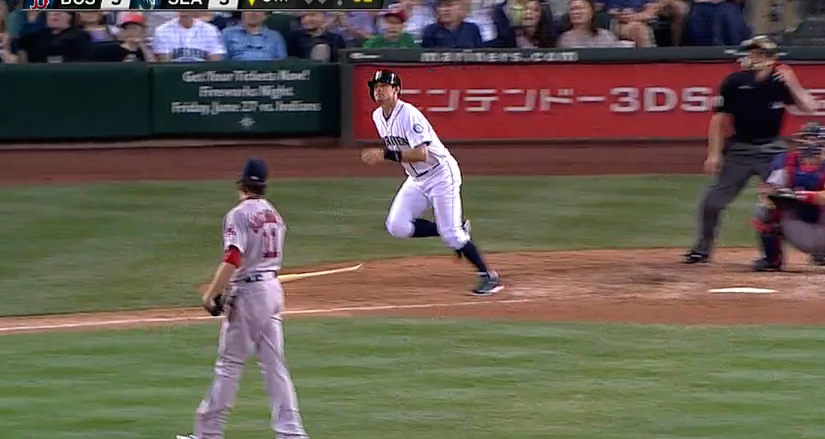 The Mariners managed to put together a tiny little rally in the ninth with only a run to go, but after Seager singled and was sent to second on a walk from Logan Morrison, Zunino and Ackley got quick outs to end the threat, and the Mariners had to settle for a series win instead of their second consecutive sweep. On to bullets:

The Mariners get a day off and then head into Cleveland*, which if you remember is where the M's started their death spiral in 2013 with closer meltdowns from hell. The trade deadline is coming up. The M's are over .500. They just took a series from the World Champions. Taijuan Walker is coming back, and Brandon Maurer might be some kind of kickass reliever. I'm not going to say any of it makes sense, and ESPN isn't really going to ever talk about the Mariners. Let's be honest.

But maybe we don't need them too. Maybe this underdog thing can get legs, maybe we deserve it. I don't know. Just look at that hat tilt and tell me any different.

*EDIT 6/26: Cleveland comes to Safeco, not the other way around so just ignore that whole little doozy there.