Mariners manage to sneak another away from Kansas City, 2-1

How is Chris Young?

Share All sharing options for: Mariners manage to sneak another away from Kansas City, 2-1

The idea of awarding someone with the Most Valuable Player award is really a stupid thing. It's stupid because after the baseball season ends, writers, bloggers, talk show hosts, and all-around insufferable types spend time debating who deserves this award, despite the fact that value is a quantitative measurement whether you believe in WAR or not. You don't see people debating which planet in the solar system has the most gravity, because they all have a certain amount and it has been measured by smart people with advanced degrees in science and while few of us understand the most complex intricacies of all that, it's pretty obvious that you can't have an opinion on it. Just an understanding of fact.

I bring this up in speaking of today's game for a simple reason. Chris Young isn't the most valuable player on the Mariners. That's Felix Hernandez. He's not even the second, third, or tenth. Nobody is going to have a debate over which Mariner should be deemed the Most Valuable Player upon the seasons' conclusion, but if we took serious the other criteria for which voters use to determine value--which isn't ever really the point of the award--I think a legitimate argument could be made that Chris Young is one of, if not the most, important Mariners on the 2014 club up to this point.

Today, Chris Young took a no-hitter into the fifth inning. He did this by being his usual Chris Young with a bit of a twist, actually getting a few grounders, but only walking one with two strikeouts. He wasn't leaving all his pitches up high today, and it helped him quite a bit. Shannon Drayer was talking about Young after the game, and mentioned that the key seems to be his mechanics: if something off by just a bit, he's a mess. Today he was on, and it handed the Mariners their second win in as many days against the hottest team in the American League. Of course, you can't really be the hottest team in the league with three straight losses, but fancy that!

The Mariners had their first run on the board in the third inning after a series of hits against Jason Vargas. First, Brad Miller bunted his way to first, was sent to second on a James Jones single, and scored with a soft liner from Cole Gillespie. It was the only run the Mariners carried through the game until late in the ninth.

The Royals both tied the game and broke up Chris Young's perfecto in the fifth after Alex Gordon took Chris Young deep in whatever the hell happened during this at-bat: 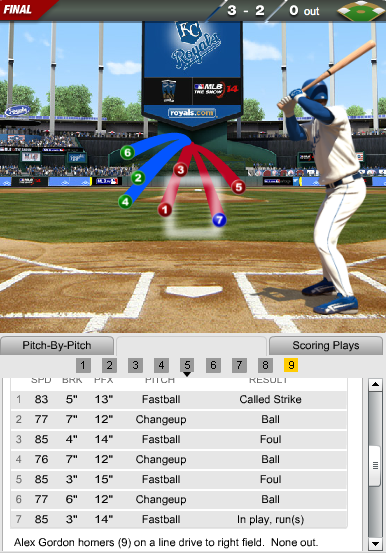 After Gordon's dinger, Salvador Perez walloped a hit into the gap that was chased down by James Jones. We haven't seen much of this arm that supposedly threw a ball over the outfield wall from home plate once, but there was a flash of it here as he gunned down Perez at second trying to stretch his hit into a double. Perez helped him for sure, but come on, those Cespedes plays have got to have you feeling jealous just a little bit. Young got out of the inning, and continued to deal through the seventh.

We've all been fearing a Young implosion soon, and his .217 BABIP, which is second lowest in the league, certainly seems like it's going to come cratering back to reality soon. But instead, Young has continued to put together a string of good starts, and his meltdowns usually consist of a few consecutive fly balls in the fifth inning rather than the first-inning reliever appearances we all expect. This, compounded with the whole Randy Wolf thing (and the reality that there is literally nothing behind him) has been one of the Mariners luckiest breaks in god-knows how long. Say all you want about unsustainability, but it can't change the fact that it's June and he still has a .217 BABIP. I don't know if it would be a good thing to have Young in the rotation in September. It's not a bad thing that they have him here in June.

But yes, the game came to a bit of a standstill after Gordon's home run. The Mariners finally managed to apply a little stress to Vargas in the ninth after two quick outs from Morrison and Buck, though, and they were aided in the whole thing by Ned Yost and Vargas themselves. After Kyle Seager doubled his way to second base, Yost flew out of the dugout ready to pull his left hander who was sitting on 109 pitches. Vargas was having none of it, though, looking straight into Yost's eyes with that old familiar hollow gaze we have grown so accustomed to over his years in Seattle. He wanted to finish his frame on his own terms. Besides, it was only Stefen Romero.

Whatever Vargas said worked, because Yost turned right back to head into the dugout. He was blanketed with a roar of approval from the Kansas City crowd, and now Vargas was an out away from heading into the bottom of the ninth. And it was looking good, too. Besides, it was only Stefen Romero.

Before you knew it, Romero was on first base, and the go-ahead run was only ninety feet away. Romero had hit a soft ball to second base, and was now standing safe on first base. Dustin Ackley was due up to face his former teammate, and it was all because of Stefen Romero. Something something, it was only Stefen Romero.

Dustin Ackley stood in the box, having replaced Montero on the basepaths back in the seventh, and quickly got into a 2-1 count. Vargas was ahead, ready to fool Ackley with a few offspeed pitches as he had been doing all day. Instead, he countered with three straight fastballs, and Ackley made him pay with an RBI single to plate Seager, and the Mariners had the lead. Rodney came in to notch the save in the bottom of the ninth, and it was all over. 2-1 Mariners.

Tomorrow it's Elias in to face Yordano Ventura, and the other half to this unexpected pitching machine will look to get the Mariners their 40th win on the year. It would be silly to sit and talk about an MVP right now, seeing as season is less than halfway over and that conversation is going to be had by rambling sports-talk stations all throughout September and November. But maybe we can just say that the Mariners are in position to win 40 games through the middle of June for the first time in I don't even know how long, and some of those wins came from Chris Young. I'll leave it up to you to decide how valuable those wins were, but they aren't going anywhere now that they have been won.