An interesting thing happened today. This afternoon, the Mariners went to New York to play a makeup game against the Yankees, plopping Felix Hernandez right down onto the dirt of one of the most expensive and well-lit pitchers mounds in all of baseball. I say this is interesting because one of the best pitchers in the world was pitching in the biggest media market in the world, and the national media was busy talking about the Marlins signing a free agent pitcher and making random guesses about what team will eventually sign Kendrys Morales.

Why is that interesting? Let's see now...

Ah yes, this old familiar game. Doesn't this feel just like yesterday? Driving us to creating an apparently unofficial tagline for the man specifically to counter these absurd navel-gazing trade proposals? Scott and I were joking on twitter after the game about making this entire recap just verbatim lines from these articles. I seriously almost considered it. For real though, look through those links and get some laughs if you have the time. Thinking about that feels kind of nice, because today's silence from the New York banshee press following Felix's contract extension--and today's utter dominance in Yankee Stadium--is just about the best I-Told-You-So we ever could have asked for.

Felix gave up eight hits today. That's tied for second-most he has given up all season. And yet, after trouble in the fourth inning where he gave up his only two runs of the game, he settled down and retired the last nine batters he faced, striking out eight and walking none. After striking out Kelly Johnson to escape the seventh, Felix slowly jaunted back to the M's dugout, untucked his jersey, and did that little scowl he does when he's really rolling in the middle of something great. Somewhere up in the stands, a bewildered Yankees fan looked down in utter confusion, unable to understand how the King was still a Mariner after the Yankees first fixed their sights on him so many years ago. But for the first time in a long time, I think he may have been one of the few traveling down that train of thought.

But it did take Felix a minute to really settle down tonight. His pitch count was rising pretty early, and the Yankees were doing their best not to go down head first with the ship. The King's only real trouble came in the fourth, when Brian McCann singled before a Yangervis Solarte double. Felix got Alfonso Soriano to strike out swinging, and then Ichiro came up to the plate. There were two outs. Felix quickly got into a 3-1 count. Then, Ichiro was Ichiro and whacked a reverse strike right back toward the mound. 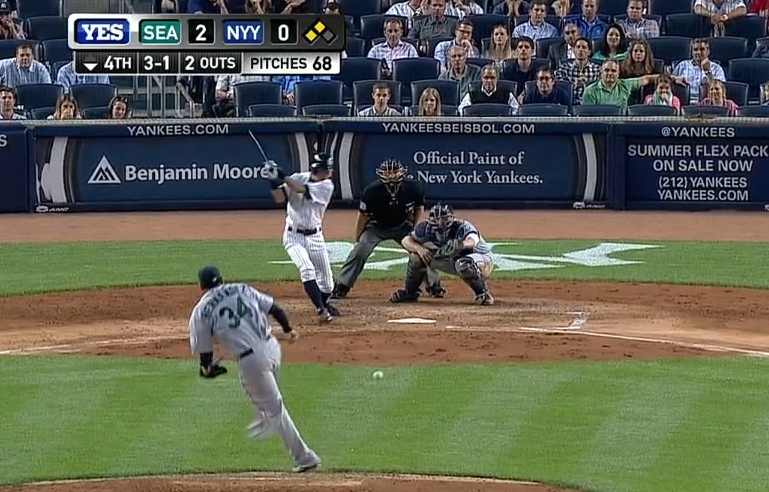 Felix impulsively stabbed toward the ball with his left foot, trying to stop it in its tracks. But instead, it was deflected into the gap between second and third, which sent Brad Miller twisting in his tracks to grab it. He seemed to forget that there were two outs, because instead of calmly gloving it and throwing to first to get the easy out, he tried to grab it with his throwing hand to Andrelton Simmons the ball in a flip second for the hard out. It got right past him, and two runs scored.

It was disappointing for sure, but it wouldn't really matter beyond impacting Felix's already low ERA, which, well, whatever. But what's kind of crazy about all this is that it's not unreasonable to imagine this game as a 10-0 shutout instead of the 10-2 walloping that it was. That might be grasping for straws, but you get the idea.

Regardless, after these two runs and a few scary moments to end the fourth, it was all but over for the Yankees. The M's first got on the board in the seventh, when Mike Zunino led off with a double, which was followed up by a walk to Dustin Ackley. Endy Chavez tried to sacrifice them both over, but everybody was safe, despite a replay review from Joe Girardi. No outs. Bases loaded. Brad Miller.

Well, he didn't hit a grand slam, but he hit the second pitch he saw right through the gap in the infield to score Zunino and Ackley, and in a way, it felt just like a grand slam. James Jones stepped up to sacrifice Miller and Chavez over, and then the whole thing was repeated with a Michael Saunders single into right field. The wheel of time, turning for the Mariners.

Speaking of time, I'm going out of order here to talk about Kyle Seager. In the second inning, Kyle Seager hit a sharp liner into center and made it all the way around to his usual home on third base. He scored the Mariners' first run with a Zunino single a minute later. But then, in the top of the fourth, Kyle Seager walked up to lead off the inning yet again. He whacked a ball in the air behind the head of Derek Jeter, who casually ran back to grab it, thinking it was foul. Brett Gardner made his way over in hot pursuit, and suddenly there were two pinstriped bodies entangled in a violent mess on the ground and one solitary baseball rolling away into the outfield. Kyle Seager made it all the way to third base. I was half expecting to see the God Hand from Monty Python pop up in the New York sky, subtly assisting our third baseman, who increased his OPS a full 60 points in three short hours today. 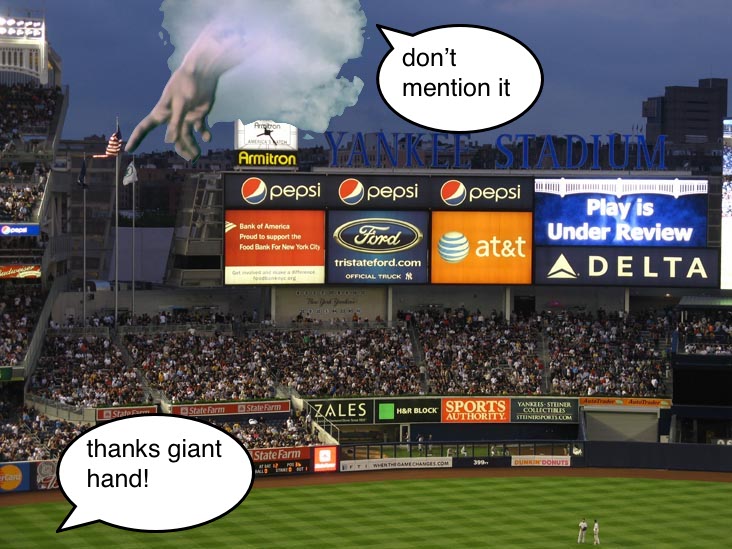 In the top of the eighth, Kyle Seager led off yet again...and doubled. Nothing came of it during the rest of the inning, but by then it was 6-2 Mariners, and everyone was sort of headed for the exits. Alfredo Aceves came back out for the ninth and got two quick outs, getting Brad Miller to ground out softly, and sending James Jones back to the dugout hitless in his New York homecoming. Michael Saunders walked up to the plate to ostensibly get the final out of the inning, digging his feet in. The two shared an uncomfortable silence, and Saunders eventually decided enough was enough, holding his hand up to call time. He stepped out of the box, and just then Aceves wound up and threw an 85 MPH meatball directly down the center of the plate, since hell, why not?

Saunders gave the umpire the dirtiest look a Canadian has ever given anybody in the history of the world (a mild glance of displeasure), and then settled back into the box. He looked at one ball, and then ripped the next pitch directly over the right field wall, since hell, why not? It was justice, sweet, sweet justice. As he round third to tag home for the M's seventh run of the game, he didn't take even a second to look back at Aceves, and the whole thing was a beautiful display of pure passive aggressive beauty. Michael Saunders is now truly a resident of the great Northwest.

Next, Robinson Cano came up to bat, and singled. Justin Smoak, the only Mariner of the evening yet to do something, took his lumbering arms and power bat to dribble a grounder just past Jeter into the outfield. And yes, up walked Kyle Seager. Dave Sims laughed that it would sure be funny if Kyle Seager hit a home run, and that Lloyd would have to order takeout for everyone in the dugout. So, of course, you can guess what happened next. He hit a ball right...here: 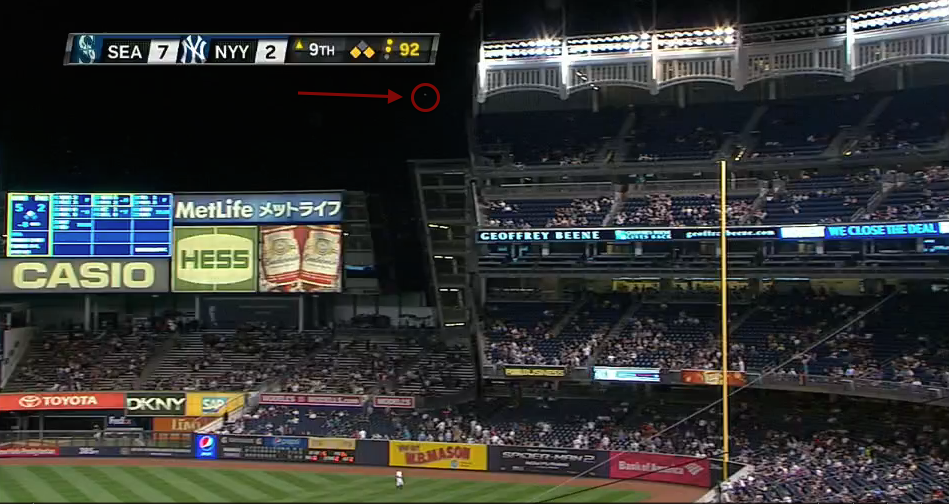 That's far. Very far. Dave Sims couldn't even finish his sentence, as he was snorting and chuckling in confusion. It was really something. 10-2 Mariners. Mike Zunino flew out to end the inning and Joe Beimel had a clean ninth to get the M's their 29th win of the season, sweeping the Yankees in New York and heading to Atlanta one game over .500.

It appears that everyone has finally stopped fantasizing about Felix Hernandez in pinstripes, and it couldn't have happened any sooner. The thing about those Felix rumors is that they didn't just start happening after one good performance in 2012 or anything (though many of those articles above were written the day after his perfect game). Yankees writers coveted Felix for a long time, and it took until Jack Z gave him an absurd amount of money to shut them up. The Yankees might make the playoffs this year and they might not, but if they don't, it will only be a matter of time until they are back in the swing of things. And you can bet that some wise souls out there already have already had their sights on who the Bronx Bombers should look at in the years ahead to get them there. I just hope that ah, okay this again, great. 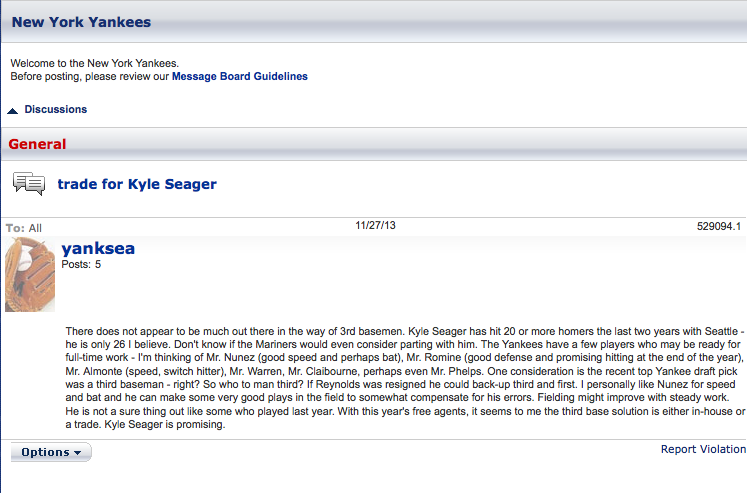