37-36: Padres triple their way to glory as Mariners Mariner as Mariners

The Mariners can't decide if they are good or not.

Share All sharing options for: 37-36: Padres triple their way to glory as Mariners Mariner as Mariners 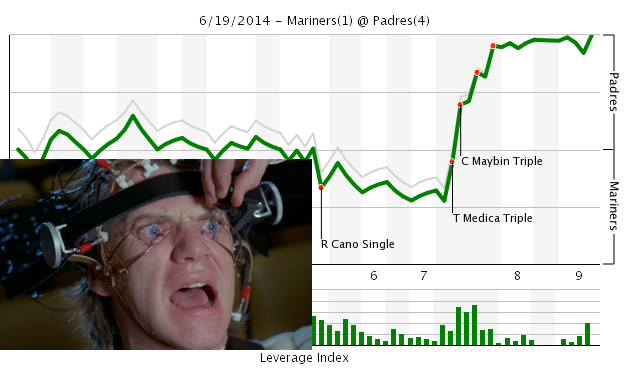 I know. Believe me, I was surprised too. Today, the Mariners managed to lose a baseball game in which their starting pitcher carried scoreless frames late into a game they should have taken on paper. Wild.

The Mariners lost a baseball game where Robinson Cano reached base three times and was left to die in the bleak desert that is the Petco Park infield, gasping for water while his compatriots around him kept passing by on their way back to the dugout. Never seen that happen before.

The Mariners lost a baseball game in which their starting pitcher strung together what were--for him--extremely efficient and successful innings, despite having a replacement waiting in the ranks in AAA Tacoma. Well, despite or due to, depending on how you like to think of the way things usually work on this team. I'm going for the latter. Just bizarre.

In case you can't tell, the Mariners lost today and it wasn't pretty. But it wasn't ugly, either, and that's exactly what I was trying to get at with these first paragraphs. This just seems to be how the 2014 Seattle Mariners lose: There have been no first-inning meltdowns yet. There have been no double-digit blowouts from teams that start playing home run derby against the entire M's pen. Not this year. Instead, we get a solid pitching performance for six innings followed by mistakes that wouldn't matter if they had lots of runs on the board. What's that you ask? Lots of runs on the board? I know, believe me, I was surprised too.

So yes, this game was tight into the seventh inning. The Mariners got the first run on the board in the fifth during a sequence that started with a walk to Brad Miller, a strikeout by Erasmo, and then bobbled force attempt with Endy running to first, sweating buckets of veteran grit out of every pore while Rick Rizzs and Lloyd watched in rapturous ecstasy. Miller was safe at second, Endy was safe at first, and Robinson Cano was walking into the batter's box.

Cano whacked a single into the outfield, and Miller rounded third to make his way home to score the only run of the game. It had felt like days since the Mariners had scored a run, and while I'm using that colloquially, it works literally as well. Today they got one that was unearned, due to the error, but HEY! A RUN!

But yes, Erasmo. Erasmo was confusing today, partly because he still looked like the Erasmo Ramirez of 2014, but also because he was pretty successful. He kept the Padres to two hits through six innings, which, yeah Padres, but still. Two hits. Erasmo. This is a good thing!

What is probably a good thing but more of a confusing thing is how he got through those six innings. Erasmo only walked two batters today, which is an improvement, but I'll still never understand where this whole no-location Erasmo came from. This is a guy that had to be pulled aside after a dominant outing in spring training and chewed out because he threw too many strikes. Now that you've read that sentence, look at this picture: 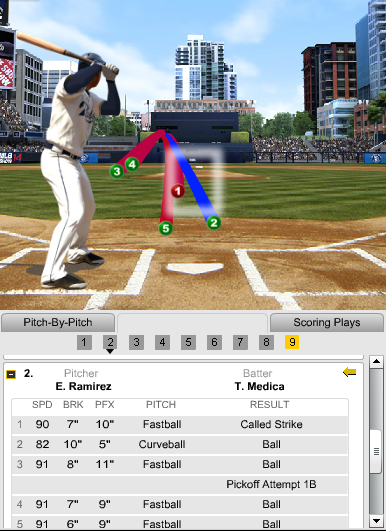 Yeah, I don't know. Ultimately, what maters is that Erasmo did his job today, and the rest of the Mariners didn't. You can't win baseball games with 1 run every day, and when the pitcher your team has been scheduling Taijuan Walker's rehab starts with has a good game, you really know you blew it.

After getting through a six-pitch sixth inning, Erasmo was sitting well on the day with only 70 pitches and presumably lots of gas left in the tank. Still, Lloyd has a memory, and it is presumably filled with lots of Erasmo nightmares. So in the seventh, Lloyd pulled Ramirez to sub in Leone, and the Mariners were three innings away from the start of another win streak. Well, sort of.

Leone threw his requisite warmup pitches and then took the mound to face Padres' catcher Yasmani Grandal. Dirt on his fingers, invisible pin on the front of his jersey identifying him as a requisite member of the Seattle Mariners' 2014 bullpen, carrying the lowest ERA in the American League. The San Diego sun reflected off the silver stitching on his hat like we were in the movies, and it was on.

One pitch, ground out to a diving Cano. One out.

As Tommy Medica took his place at the plate, Leone licked his fingers and readjusted his jersey. Just another day in the office, ol' chap!

One pitch, strike on the upper inches of the plate.

Second pitch, woah wait where is it going how is it doing this it's rolling away, far, far away! Stop the ball! This isn't supposed to happen! Medica looked up and suddenly he was on third, and the tying run was 90 feet away.

Then, Cameron Maybin. It only took him an extra pitch to do the exact same thing, and the game was tied. Leone walked Carlos Quentin, and then gave up another hit to Chris Denorfia and suddenly the bases were the Wheel of Fortune, spinning and replacing runners at ease with A Hit For You! And A Hit For You! Joe Beimel replaced Leone and gave up the final run of the game before departing the inning. 4-1 Padres.

After the eighth, Padres' closer Huston Street came to get the final three outs when the Mariners suddenly remembered they needed offense to win the game. After a John Buck flyout, Dustin Ackley found a gap and soared to second with a double. Then, a Brad Miller single. Tying run at the plate, for the pitchers' position.

Suddenly, time froze, and as Lloyd turned his head to the bench to call out a pinch-hitter, the words mostly...used against left-handed pitchers....mostly materialized into pure matter, awakening into consciousness after being called into being by McClendon on the afternoon of June 12th. Lloyd was conflicted. He knew that words carry meaning, especially to snarky fans and inquisitive beat writers trying to make deadline. He couldn't go back, he couldn't do it. Besides, he knew the splits as well as anyone else.

But then he looked at his bench, and knew that he really didn't have a choice. Jesus Christ, he said to himself, shaking his head in audible displeasure. Jesus Montero jumped off the bench with an eager smile, grabbing a batting helmet on his way to the on-deck circle. Lloyd almost stopped him, but he realized that Montero was going to get an at-bat whether he wanted him to or not.

Then he grounded into a double play and the game was over.

I would be remiss to end this recap without mentioning Brad Miller's great barehanded play midway through the game. Of course, MLB.com won't let me link it, and I also can't .gif it so...just watch it here and realize that whatever was going on with the guy in April actually appears to be a distant memory right now. It's the little things. Little, little things.

1. What do you listen to in the car, if you drive? Or headphones, if you commute another way?

2. If you were given the option to get a free jersey of anyone as long as they weren't a Mariner, who would you choose?

3. Most overrated/underrated bar/restaurant in Seattle: