Mariners drop yet another Felix gem to the Padres, 2-1

Share All sharing options for: Mariners drop yet another Felix gem to the Padres, 2-1

These brief little snippets do a good job of telling the story of the entire game, honestly. It's a game you've all seen a thousand times before, the kind of game that was at the forefront of conversations between old stodgy baseball writers in 2010, the kind of game that the New York press loved to fantasize over while penning their Felix-in-pinstripe columns of yore. It was the kind of game that I even referred to in today's game thread when speaking of Andrew Cashner, whose Padres defeated the Mariners today and I need to learn to just shut up every now and then.

Yes, a wasted Felix start. I'm gonna get that part out of the way fast, though, because holy shit I'm tired of writing that story. Felix lost today because the Mariners didn't give him more than a single run in the second, but he also lost today because he had a wild pitch in the sixth after allowing a baserunner to get to third. After giving up a leadoff single, he retired the next 15 batters he faced, and had that been the case, there would have been two consecutive perfect games happening in the same state by the two best pitchers in all of baseball. Felix. Felix did all this with ten strikeouts on an efficient pitch count, and blah blah blah that's out of the way and I'm so tired of that narrative.

Endy Chavez led off the game with a single for the Mariners, and promptly decided (or was told) to steal second base in a 2-0 count to Robinson Cano following a James Jones strikeout. Sending a 36 year old to second in the first inning of a game against the worst offensive team in baseball with your team's best hitter at the plate in the game where your best pitcher is...okay I've run out of pronouns, but you get the point that this was dumb. Chavez was out on the throw by a mile, but tried to edge outside to the far corner of the base to avoid the tag, ending up with a confusingly timed tag that warranted a three-minute review.

Except, it didn't really warrant a review because he was clearly out, and now the Mariners had lost their challenge in the first inning. Blah. And the best part? After two pitches, Robinson Cano walked and the whole thing was fucking pointless. Thanks, folks.

Still, the M's got on the board in the second after Mike Zunino got hit with his team-leading 9th pitch, and was sent to second on a Dustin Ackley single. Brad Miller came up to the plate and whapped an RBI single out to left, and the M's were up, 1-0. Felix came up to bat, and despite clearly wanting to swing that thing like a tree trunk, he laid down a sacrifice bunt for the second out of the inning, and Endy Chavez grounded to send it to the bottom of the second.

It was mostly zeroes for both teams until the sixth, when Felix let Alexi Amarista single, who promptly got to third after a sacrifice bunt from Cashner and a groundout by Seth Smith. Felix was feeling the stress and let a changeup get a little too heated, and sent a pitch to the backstop and the game was tied.

After Lloyd pulled Felix in the eighth, Charlie Furbush came in and before you knew it, Evereth Cabrera was on second base. Tommy Medica came up to the plate to pinch-hit for Joaquin Benoit, and the next ten minutes (literally, I'm not exaggerating) were spent between Charlie trying to keep Cabrera on second and the ball off the bat of Medica. It was excruciating. And ultimately useless, Medica singled in Cabrera for the Padres' second run of the game, and it would be all they needed for the rest of the game. The Mariners came up in the ninth to nothing and that was that.

Lost in all this is that Brad Miller made a series of run-saving plays few would have imagined him capable of during his sub-.100 slump in April. It seemed pretty clear that Miller's offensive woes were impacting his defense, and that his brain had devolved into a stress-filled ball of goop and anxiety. Baseballs became the cannonball badguys from Mario with menacing grins, and routine grounders were dropping from his hands at an alarming rate. There were at least three balls today that Miller kept in the infield that would have been damage outside the reach of an average shortstop, from two diving stops that kept the hit at single bases to this leaping grab: 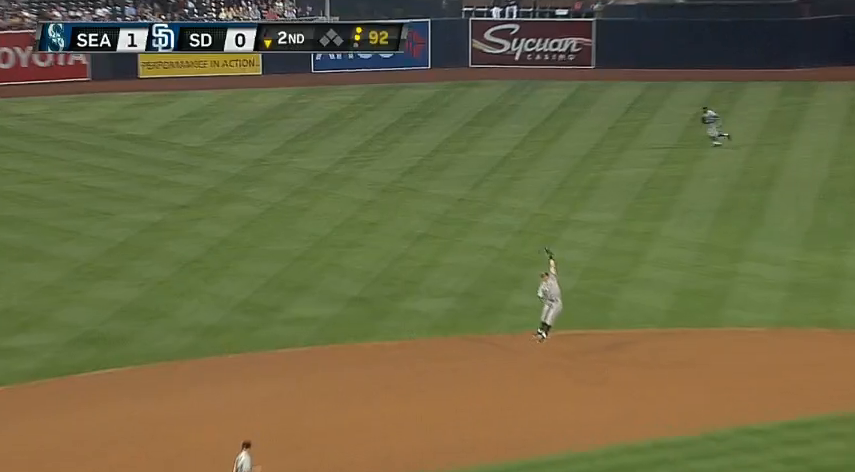 I don't even know what to say about the next game, because today was supposed to be exciting and wonderful, and who knows what Erasmo will bring. But with Walker on the way and the trade deadline coming up, you know there is something exciting to look forward to. Even when Felix watches a wonderfully pitched game get thrown down the drain to a shitty offense at the same time as Clayton Kershaw throws a no-hitter in Los Angeles with 8 runs of support behind him. Kershaw, though, lost his bid for a perfect game on a silly error from Dodgers' shortstop Hanley Ramirez, and his quest for perfection still continues. That's old news to Felix though. So...I don't know. Something something progress. I guess.