The Seattle Mariners and the Tremendous, Happy, No Bad, Very Good Day

Share All sharing options for: The Seattle Mariners and the Tremendous, Happy, No Bad, Very Good Day

Well, yes, it was a getaway day today and that's kind of what the Padres let happen to themselves and this game. And in a way, you really kind of have to feel bad. They just lost their Hall of Fame broadcaster in January, franchise icon and baseball hero this week, and oh yes, are having a terrible season. But in another way you don't have to, because they will soon be good again, spending summers laughing at the Mariners ostensibly hovering in an ageless flirtation with relevancy never materialized in 2018 or something. So go on, feel good today, dammit. You've earned it.

Well, even that is a bit of a misnomer. You did nothing to help the Mariners win today, but Jesus Montero did. How about that?

First of all, watch the video. It was a classic Montero dinger pulled out of the ether, coated in a thin layer of dust left over from 2012. This is a bit unfair, but look at these two post-homer-contact screengrabs and tell me why the laws of physics are able to govern the universe with such efficiency while being so obnoxiously confusing: 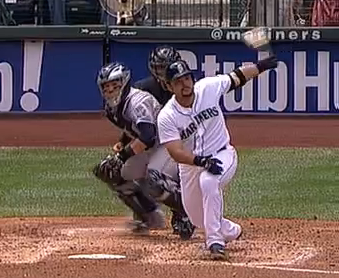 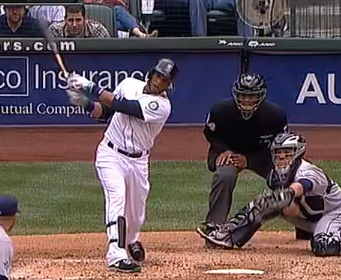 Alright, fine, very unfair. Nobody said it has to look great. And sure, I'm probably overreacting a little bit, because it's not that bad. But still, this seems like a really good visualization of why the Mariners have refused to ever wholly give up on Jesus Montero. He looks like he's almost falling over. The bat is almost consciously trying to force itself out of his grip like a wet pool noodle. His legs are, oh I don't even know what they are doing. But it had the exact same result as Robinson Cano's home run in the opposite side of the field.

The best part of this, though, is the reaction afterward. Montero rounds the bases with great effort, and Dave Sims' attention suddenly turns to Lloyd McClendon rather than, you know, the 24-year old prospect who just hit his first home run in a year since coming off a PED suspension and showing up to camp ridiculously out of shape who was currently rounding the bases.

They are celebrating, sure. They are happy that the Mariners just put two runs on the board after Rene Rivera took Elias deep in the top of the second. They are happy that the lead had returned to the home dugout. But they aren't just happy here. They are laughing at themselves, at Lloyd, and this whole process and this whole thing that just happened in front of them. Look at Michael Saunders and tell me this is anything other than a man conceding that he just lost a bet:

But yes, Elias was Good Elias today, not that the Padres gave him much to worry about. He only needed those two runs from Montero, but was gifted two more by Robinson Cano in the fifth, who hit his second Safeco home run in classic Robby Cano fashion. Elias ended the day with six strikeouts and only three hits over seven innings, which could have possibly been eight before the Mariners spent a good fifteen minutes hitting baseballs in their half of the seventh.

The inning started with two quick outs from Brad Miller and James Jones, but picked up with an unlikely Stefen Romero ground rule double and an intentional walk to Robinson Cano by Padres' reliever Tim Stauffer. Then, an unintentional walk to John Buck to load the bases. Kyle Seager lightly tapped a pitch oh, six feet out of the infield past third base. He got to second standing up, and the Mariners put two more runs on the board. I don't know how it happened, but it just continues. Take it away, Kyle.

The rest of the game passed without incident, as Dominic Leone had a one-hit eighth, followed by a perfect ninth from Danny Farquhar. And despite these heroics from Seager and Cano, the real heroes of the game were James Jones and Jesus Montero.

Montero: Not only did Jesus hit the aforementioned home run, he made his first career start at first base and looked absolutely fine. Now, of course, he isn't going to get many starts at first even if he somehow manages to stick around after the next roster move, and looking good in one day without incident is far from being an even minus defender. But you have to think today felt nice after everything that happened in the past year, his fault or not. Good for him.

Jones: James Jones was 3-5 today with a stolen base. The Mariners wouldn't end up even needing the extra insurance, but this kind of stuff happening regularly in games where extra runs matter is going to be huge during the rest of the season. Now if only Lloyd can somehow fall out of love with the idea of Endy Chavez leading off ever again, then we may be on to something here.

The Mariners head to San Diego tomorrow and Felix gets to hit another Grand Slam. Mark it on the board.