Hey...guys...can we send some of those eight inning runs back to last week please?

Share All sharing options for: 35-34: Mariners sneak one past sleeping Rangers bullpen 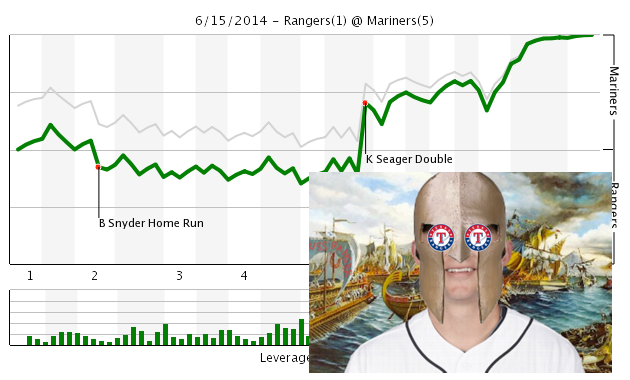 Well, for a while, it wasn't looking great. The Mariners went four innings without scoring, stringing together a sequence of base-hit-to-advanced-runner-to-strikeout-to-something-else-out for every inning of the game. Meanwhile, Hisashi Iwakuma was efficiently dealing through the Rangers' lineup, only giving up a solo home run to Brad Snyder in the second. Still, they were giving him nothing to work with. A starting pitcher, staring at blanks from both the team he pitches for and the team he was pitching against. Stop me if you've heard this one before.

For a while, it felt like someone would get on second base and get stranded. It happened just about every inning too, until the Mariners finally put something together in the fifth. Endy Chavez, who also doubled in the first Mariners' at-bat of the game, whipped a single into right field before watching James Jones pop up in the next at-bat.

Cano stared at a couple of pitches from Rangers' starter Nick Martinez (who before today had walked more batters than he had struck out, SSS and blah blah blah) and there were runners on first and second with one out. Logan Morrison popped out, and it was up to Kyle Seager to save the day, who promptly doubled in both Endy Chavez and Robinson Cano in a 1-1 count. I think, perhaps, that the Mariners should just play the Rangers everyday and before you know it, Kyle Seager would be worth more WAR than Mike Trout.

After giving up a leadoff single to Elvis Andrus in the sixth, Iwakuma settled right back in, getting three quick outs from Shin-Soo Choo, Adrian Beltre, and catching Andrus stealing on the basepaths. Meanwhile, John Buck had been subbed in at first for Logan Morrison, who had apparently cut his head doing something. It was Buck's first career appearance at first base, and in the process, Jesus Montero sat in the dugout, spitting and chewing sunflower seeds.

After a walk to Jones in the seventh, the Mariners came back in the eighth and decided to lay the damage on. John Buck hit the first pitch he saw into right-center, and was promptly replaced by Cole Gillespie on the basepaths. Ranger Killer Seager came back up, and hit his second double of the game to score Gillespie from first. Seager was 4-4 on the day, and holy crap, Kyle Seager. He was then sent right to third on a Mike Zunino single, and promptly scored on a Dustin Ackley single right afterward. Ron Washington decided it was enough, and replaced Rangers reliever Robbie Ross Jr. with Ben Rowen, who was making his MLB debut for the Rangers.

Rowen, a submariner, didn't exactly run into trouble or anything, but it was as if the Mariners had suddenly remembered that you were supposed to do things with bats in their hands. Willie dropped down a sac bunt and for once, it actually fell just perfect enough to get away from any defender. Willie was just barely out at first despite a replay challenge, but the runners advanced, scoring again on a sac fly from Brad Miller. It was shallow, too, and Choo probably could have either thrown out Ackley at the plate or at least made him stop on the paths. But he double-clutched on the grab, and Ackley was safe. Not that it would have mattered, because it was 5-1 and the Mariners were on their way to a win for the first time in six days.

You have to feel good about the Mariners narrowly escaping their second consecutive series sweep and sixth loss in a row. They have a lot of work ahead of them, and you know that they are all sitting in the dugout during each game with stern expressions, mechanically and violently analyzing every play like it was their last. Playoffs in reach, outs away from another winning streak. The intensity of a professional athlete knows no bounds as 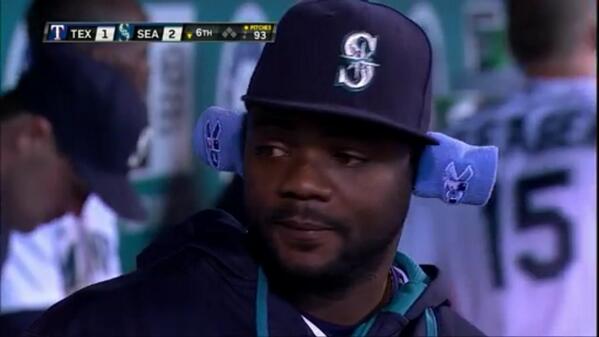 Oh well I mean okay I guess that works too.

(thanks to @cespedesbbq for the screengrab, btw).

The Mariners take on the Padres tomorrow, and that's it for me today. Apologies on the briefness of this recap. Go find a dad and tell them they are great. We can get back to yelling at these bozos tomorrow night.