Share All sharing options for: Mariners and Rangers beat Felix, 1-0

Well, what we had here was some classic Mariners shit that you are completely used to, and yet, is A Thing still capable of taking your heart out of your chest through two little easily-openable doors and tossing it on the ground, stepping on it with lead-lined shoes and then playing that Maroon 5 Mick Jagger song on constant repeat while it, and you, lay bleeding on the floor.

Alright, look, it wasn't that bad. The last thing we need is more people coming on here and saying we are horrible pessimists while making fun of our championship banners. I think we all understand the frustration over what happened on the field tonight, and what has happened before. A Felix gem that lasted almost nine full innings, wasted with an absent offense that looked like they were facing Felix themselves.

It started early, and continued through the game. The Mariners didn't get their first hit until the third inning, when Mike Zunino singled to left on the first pitch he saw. Brad Miller walked up and quickly grounded into a force out, and the Mariners wouldn't have a baserunner again until...oh for fuck's sake, Mike Zunino came up to the plate again. Seriously, this is tough. See, usually you take the first couple of paragraphs to talk about all the things that happened early in the game, through innings one two and three, or so. But It's the third paragraph and I only have 244 words written, and I'm now in the sixth inning of the game.

And that isn't an exaggeration. The first six innings lasted an hour. Felix was dealing after running into the occasional baserunner, and had himself a classic Felix night with 8.1 total innings pitched, four walks, and six strikeouts. The problem was that Rangers' starter Nick Tepesch was having himself something that wasn't quite a classic Tepesch night, striking out five Mariners over six innings with only two hits. So by the time you looked at your watch to see it was 8:22, the Mariners were headed to the seventh inning, and just about nothing had happened all game.

The Mariners' only real chance to do some damage came in the bottom of the seventh, after Kyle Seager drew a walk on six pitches from Tepesch. He wasn't exactly afraid to pitch to Seager--he was simply missing his spots which were at times located right on the outer edge (and, notably, in the lefty zone that had been in effect all night). Here's what it looked like: 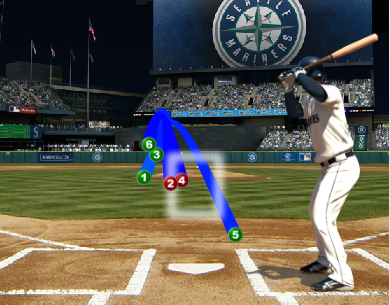 After this, Tepesch lucked into a force out after pitching outside to Robinson Cano, which certainly looked like he was afraid to pitch to the guy. Then, another walk to Logan Morrison, this time on five pitches and certainly not because he was afraid to pitch to Logan Morrison. By all accounts, Tepesch was done for the day and he had only thrown 73 pitches. Ron Washington knew this, and slowly trotted out of the dugout to pull him for Jason Frasor.

Lloyd countered the switch with by pinch-hitting Endy, who quickly struck out on four pitches, three of which were in the zone. Endy Chavez, ladies and gentlemen. 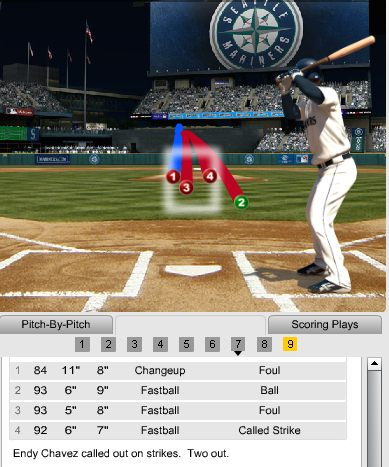 With two outs and the M's only real chance to score on the line, Dustin Ackley took his spot in the batters' box. He quickly fell behind, 1-2, but managed to look at two pitches out of the zone. Frasor, a right hander, knew exactly what to do. He turned his head 180 degrees to see Mike Zunino swinging his bat in the on-deck circle with his right hand. He then turned his head ever-so slightly and saw first base open. He looked back and saw Ackley, standing on the left-handed side of the dish, who had just drawn a full count. Frasor wound up and threw the ball in the dirt, right between Ackley's knees and ankles. Ackley swung. Frasor smiled.

The eighth passed without incident, and then before you knew it, Felix was right back out there for the ninth. Despite getting a quick strikeout from Michael Choice, Felix had Elvis Andrus on base with a well placed single up through the gap. Shin-Soo Choo walked up to the plate and looked at a couple of pitches. Andrus took off for second during one, and made his way in safe for his fifteenth stolen base of the year. Small-ball was on, and Washington knew this was his only time to strike.

After getting his second strike for a full count against Choo, Felix looked down to try and get the former Mariner swinging. Instead, he threw just low enough to miss the zone, and on the pitch Andrus took off for third. Zunino could have probably had him by a mile, but bobbled the transfer, and then there were runners on the corner and 30,000 people in the Safeco stands who had been trying out new strange chants all evening realizing that Felix was going to probably lose a ballgame yet again to an offense that ate too many redvines in bed while binging on Netflix in their underwear.

Fernando Rodney came in the game and managed to get Beltre to ground into what should have been a beautiful double play to end the inning and the thread, but Cano got just a little too much on the throw, causing Morrison to lean off the bag and miss the ball by literal centimeters. The run scored, and it was all the Rangers would need as the Mariners went down in order in the ninth.

I've written a few recaps about games where the Mariners blow it for Felix. Not a ton, because I've only been doing this for a year, but enough to realize that I'm just going to start repeating myself if I keep trying to make sense of the whole thing in my final paragraphs. Instead, we should just pretend that the Mariners lost an 8-8 tie game on an errant throw from their new quarter-of-a-billion-dollar second baseman in the bottom of the ninth. It doesn't quite work that way, but in a way, it kind of does.

Tomorrow the Mariners get to face Safeco Joe, and if last year was any sign, it should go well. This is good news, then, considering they just scored eight runs against a mediocre starter and should be on their way out of this losing streak in no time. Sure is a good thing I didn't make up half the things in that last sentence or anything.