34-32: Yankees sweep the Mariners with dumb game that is dumb

Share All sharing options for: 34-32: Yankees sweep the Mariners with dumb game that is dumb 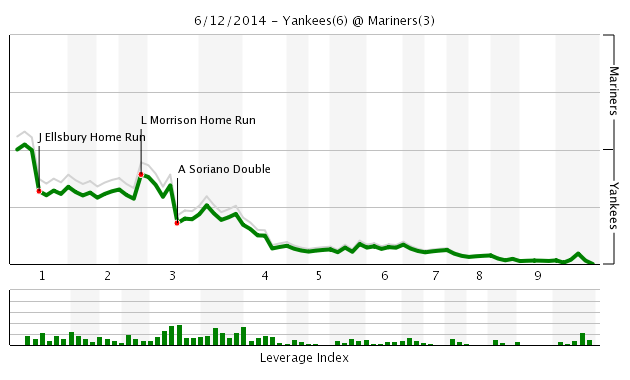 Well, it wasn't quite the Roenis Elias start we were all hoping for, as the Yankees too the third game of the series to sweep the whole thing, and oh, hey, the Mariners' 2014 season sits on the edge of a razor. Surprised? You shouldn't be.

Elias had what can be considered nothing but his worst start of his rookie season so far, which considering everything is really not the worst. He lasted 3.1 innings, giving up six hits and six earned runs, which is a little bit of a meltdown for sure. And it started early, as he led the game off with a one-out single to Derek Jeter, who was plated moments later on a Jacoby Ellsbury home run, and somewhere in an alternate universe, the M's are spending a fortune and Ellsbury and Cano are both Mariners. Also in this universe, the Mariners have the exact same record they do today, so you know, whatever.

Elias had an extremely rough first, needing 24 pitches to get through seven batters. He settled down a little in the second with three quick outs, and despite Logan Morrison's first home run as a Mariner, found himself in a world of trouble again in the third. Elias gave up a single to this Derek Jeter fellow again and promptly walked Jacoby Ellsbury on four pitches. He was just not locating at this point, and despite getting his first out to Mark Teixeira a moment later, the Yankees quickly had two more runs on a double from Alfosno Soriano.

The fourth inning was pretty much the same damn story, as Elias walked Brian Roberts and then sent him to second with a single to John Ryan Murphy. After Brett Gardner bunted them over, Lloyd decided enough was enough and pulled him for Dominic Leone, who then threw two pitches before Derek Jeter ughhhhhhhh can this week just be over already?

Jeter scored two more and before you knew it it was 6-1, Yankees. Time to pull the plug.

The Mariners did their best to fight back through the rest of the game, seeing Brad Miller give a bit of work on the evening going 2-4 with a double and an RBI single from James Jones in the fifth. Perhaps what is most annoying is the fact that the Yankees jerks made two incredible outfield catches that could have all but sent the game within a run, or tied it, or whatever you know it was confusing. First it was Cano, up at the end of the fifth in a 6-2 game. Here's the dumb catch from Ellsbury, which is dumb and stupid:

This dumb catch saved the Yankees at least one run. Then in the seventh, Mike Zunino was up at the plate and quickly deposited a ball over the centerfield fence that literally everyone thought was gone. But somehow Brett Gardner appeared and pulled the ball out of his glove for the out. Some total garbage, if you ask me. In the 1920's they had vaudeville magic shows and they were mostly populated with cheap tricksters who existed solely to fool their audiences as charlatans, dirty and foul. That's what this garbage was. I mean, you have to give it to them, I guess. But also you don't really have to because dammit, Yankees, I'm tired of this stuff:

The Mariners threatened one more time in the ninth after Dustin Ackley doubled and was scored with a one-out double from Logan Morrison, who had himself quite the comeback night against a pitcher named something other than Tanaka. Girardi promptly replaced Shawn Kelley with David Robertson, who struck out both Mike Zunino and Brad Miller to end the game, and all returned to it's proper place in the universe: Shawn Kelley blowing it at Safeco, the Yankees sweeping the Mariners, and everyone prepping for a series this weekend featuring Felix Hernandez, Hisashi Iwakuma, and Joe Saunders. Goddamn. We can't escape.

The Yankees sweep, but it's not really the end of the world because there is a lot of baseball left to be played. This is the problem of looking at an entire month as "easy," and forgetting that everything doesn't work the way it is supposed to on paper. I think it would suit us all better to approach the next thirty days with the same pressure as the previous, knowing that at any time a playoff run could be done in by just about anyone on this team. Today it was Logan Morrison doing his best. Hopefully in August it will be someone who isn't even wearing a Mariners uniform today. And I'm not talking about Jesus Montero.