Michael Saunders has hit the DL, leaving the Mariners with three above average regulars on offense. Something's got to give.

Share All sharing options for: The Mariners' growing position-player problem

The good news is that it's not an awful injury, at least in the short term. Usually AC joint inflammation happens to pitchers, not hitters, and the main ramification seems to be weakening of the throwing arm. I'd be fairly surprised if Saunders missed more than the minimum 15 days, and when he comes back he should be more or less back to normal (unless, in a worst-case scenario, his power goes missing again). The bad news is that guys who go on the DL with this particular malaise tend to have chronic arm problems; Ryan Zimmerman and Matt Kemp are the two most recent examples, and they don't set particularly encouraging precedents. We can probably expect Michael Saunders to struggle with his shoulder off and on for the rest of his career.

The worst news, though, is that Saunders' injury leaves the Mariners with only three above-average regular position players. Check out the Mariners.com depth chart. It's, uh, not pretty. 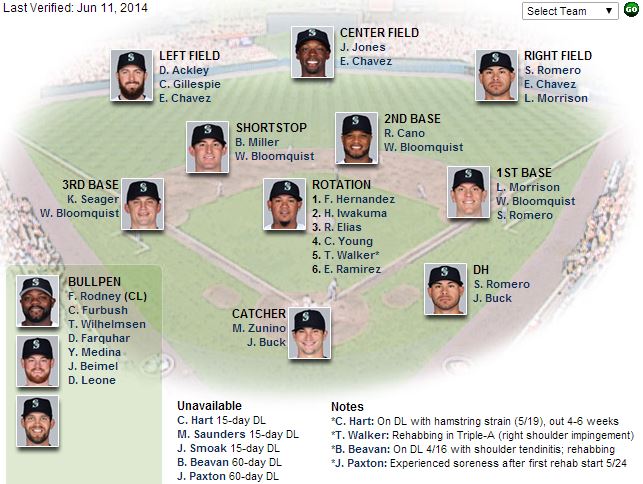 Cano, of course, is the best position player on the team, and hopefully his home run last night is the first of many to come. Seager has been his same old 3-4 WAR self, despite a recent run of bad luck. Mike Zunino's superb glovework is enough to make up for the fact that he's been completely garbage at hitting ever since I wrote this article.

That's pretty much it.

You can make cases for Brad Miller (who's been quietly turning it around after a putrid May) and James Jones (depending on what you think of his glovework in center field). Dustin Ackley and Cole Gillespie make up a theoretically tolerable left field jobshare, though to be frank I wouldn't expect much better than replacement-level performance from either of them going forward. But unreliable and unknown as those four may be, they're not the real problem. The real problem is... well, have a look at the rightmost side of that depth chart.

This situation quite simply cannot be allowed to continue. Not if the Mariners want to win baseball games, anyways. Their DHes have already combined for the second-worst wRC+ in the AL, ahead of only Billy Butler, and running an overmatched rookie with bad plate discipline out there isn't going to improve matters. Logan Morrison's return from Tacoma may help to patch the hole, or at least keep Willie Bloomquist from being a starting first baseman, but the Mariners need to do something about their offensive problems. Fast.

There are two options: looking internally and trading for outside help. First, the internal options:

OK, so it's a bit of a motley crew. Hart, Smoak, Choi and Franklin seem like non-factors in the near future, leaving Kelly, Blash and Montero as the main contenders. The 40-man situation is a big point in Montero's favor; the Mariners are already going to have to cut someone when James Paxton comes off of the DL, and I'm sure they'd really rather not force themselves to lose two players instead of one. However, he's embarrassed the franchise so badly over the last couple of years that I can't imagine they're eager to give him another shot. Besides, he'd be a Romero replacement, and the immediately available job is Michael Saunders'. All in all... none of these guys seem like a cure-all. Most of them seem like pretty flawed players.

So yeah. The trade market: way more appealing than the internal options! Unfortunately, it's also unlikely to really develop for a while, as teams like the Twins wait to fall all the way out of contention before selling. I'd love to see the Mariners pick up Fowler or Joyce or Montero at the July 31 deadline, but for now it's probable that the solution will have to be internal.

The good news is the Mariners' weak June schedule. Because they haven't got any really tough teams coming up soon, there's a chance they'll be able to skate through a month with only three above-average regular position players. By the time the schedule toughens up again, they'll hopefully have made some key additions on the trade market. Otherwise, they could find themselves rolling into a tough end-of-season stretch with Stefen Romero and Endy Chavez still on the team.

It's a tricky spot for the Mariners' front office. Here's hoping they execute.