How are the Mariners this good?

Good pitching, bad hitting, and a whole lot of success with RISP.

Share All sharing options for: How are the Mariners this good?

Since I became managing editor here, it's made me the guy that everyone goes to for all the answers regarding the Mariners. From casual fan friends that ask what a Roenis Elias is to devoted fans who expect me to have the exact reason why Gareth Morgan got way more money than he was supposed to, the questions have a wide range. I like it, but I don't always have the answer without doing what they could have -- research. Recently, the question I've now received three times is simply this.

How are the Mariners this good?

At first glance, it doesn't appear as if they've lucked their way into a 34-30 record, at least not by standard measures. Their run differential sits at +31, and their expected W/L is actually 36-28. They're only 6-9 in one run games, and there's an argument, at least on the surface, that the Mariners could be even better off than they are today if a few more things went their way.

Many thought the Mariners would be right about .500 this year, including me. But they're doing it in a way that's totally unexpected, with guys like Cole Gillespie, Endy Chavez, Willie Bloomquist, and James Jones now all playing major roles. They've done it with bad Brad Miller, bad Dustin Ackley, really bad Justin Smoak, and good-but-not-what-we-paid-for Robinson Cano. Outside of Michael Saunders, nobody on offense has taken a step forward in their career, as even Kyle Seager is doing what he did before he cratered late last year.

Still, the Mariners own the second Wild Card spot and the 6th best run differential in baseball. So let's examine where they rank in some key offensive, defensive, and pitching categories. 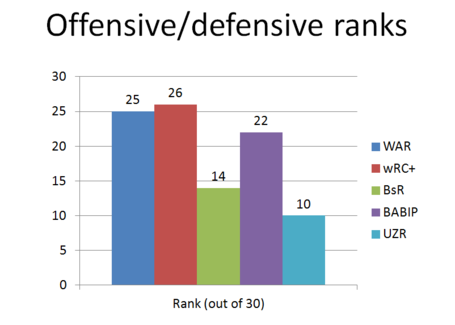 The offense is about as expected, falling in the bottom fifth for wRC+. Relatively positive fielding contributions haven't made much of an impact on the WAR, and neither has the baserunning. 25th overall in WAR. 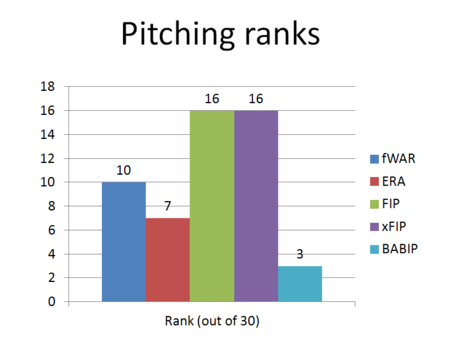 The pitching side is much better, especially if you choose to ignore the peripherals, as FIP can't make sense of Chris Young. Several other relievers, including Joe Beimel, Dominic Leone, and Yoervis Medina, are also limiting runs more than they normally would in theory, but Beimel has often bucked the FIP trend and even with some regression, Leone is still really, really good (2.66 xFIP).

When you start to examine the pitching a bit closer, Chris Young begins to poke his head out as the magical peripheral-busting wizard he greatly enjoys being. The Mariners have only allowed a .276 BABIP, third best in the league, but that number bounces back towards the middle of the pack if you eliminate Chris Young's ridiculously low .205 BABIP.

While Young is clearly due for some regression, it's also kind of his thing - Young has miraculously carried a .250 BABIP though his entire career, thumbed his nose at SIERA, xFIP, and anything else that thinks more of his fly balls should be home runs than they actually are.

Still, even accounting for Chris Young screwing all forecasting up, ranking in the bottom fifth for offense and somewhere in the top third for pitching doesn't exactly scream playoff team with the game's 6th best run differential. There has to be other factors accounting for the Mariners' success.

Through some research, things reached a head with performances with runners in scoring position, with both offense and pitching. First, an examination of the pitching. 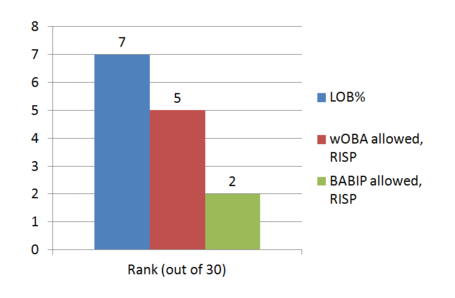 The Mariners have been great at stranding runners (LOB%), but watching this chart tilt is harrowing. wOBA allowed has to do with some skill, but it's measurably better than than the kind of offense they're allowing overall. That's probably (definitely) in part due to a ridiculously low .237 BABIP with RISP, 2nd best in baseball. The A's, for what it's worth, are #1 at just .222 allowed.

There's undeniably some good luck going on with the pitching, but at least the pitching is good, or at least it has been. Knowing that there's possible help on the way, via internally or externally, helps ease things. But Chris Young and others could be due for some serious regression soon, and it might not be pretty. The Mariners have been great as escaping jams, but they've been fortunate to be so effective.

Meanwhile, the Mariners have also seen some fortuitous bounces on offense. 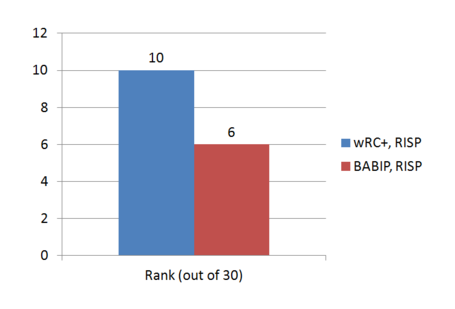 Not only is the offense significantly improved with RISP, but their 6th ranking BABIP is .305, a sharp counter to the deflated one when the Mariners are on the mound. I don't like to use BABIP as a pure luck ranking with hitters, as many hitters tend to make their own luck more so than not, but when combining the entire team, something doesn't click with a bottom five offense getting top six bounces.

The Mariners are currently a Wild Card team, and that's worth celebrating. It isn't my intention to rain on parades or proclaim that the Mariners are about to crater into a downward spiral. They have a fortunate schedule coming up, and the rotation has been held together by a luck dragon in Chris Young that has yet to burn his own team. But even Chris Young can't keep up a .205 BABIP all year long, and the Mariners definitely won't continue to be this fortunate when runners are in scoring position, on both sides. Something's going to give eventually, and the Mariners have to be prepared for the normalization to occur. Maybe that means simply getting healthy and starting to hit better. Maybe it means buying some key pieces at the deadline. Maybe it means getting all of Chris Young's regression out in one individual game where he gives up ten hits and six homers in four innings.

The M's have earned the right to be where they are, because these games actually happened. I hate when investigations like this attempt to re-write history by discounting games that can't be changed. I can't claim the true talent level of this to date, because there's too many other factors at play. This article is largely about luck, and who knows when it will run out, or if the Mariners have made their own luck in unprecedented ways. They probably haven't, but they have won 34 games compared to 30 losses. They have scored 31 more runs than their opponents. They have been tremendously fun to watch.

Dark days may be ahead, but aren't they usually? I'm looking forward to the Mariners overcoming the oncoming storm instead of waiting for the crash. Hopefully, the front office and players are as well.