Two months into the season, the Mariners' most successful reliever has been one Dominic Leone. There's reason to be suspicious.

Two months ago, Dominic Leone was called up to make his major-league debut with the Mariners. In my article on the subject, I took a look at three ways of projecting Leone's performance - three very different ways that painted three very different pictures. His minor league track record was encouraging, his Pitch F/X comps were confusing, and his Fangraphs projections were depressing. Befuddled by conflicting reports, I concluded that I had more or less no idea what to expect from his K and HR rates. I didn't mention it in the article (in the interest of being charitable to the rookie), but privately I wasn't optimistic.

Shows what I know!

So far this season, Leone has been by far the Mariners' most successful reliever, posting an AL-top-ten ERA of 1.52. Part of that success has been thanks to his silly 91.6% strand rate, which makes him something of an obvious regression candidate, but he's also got an above-average ground ball rate and a surprisingly high K/9. Even peripherally speaking, Leone has performed remarkably well, and he's been a big part of the turnaround that has the Mariners' bullpen ranked seventh in the major leagues in ERA.

The easy assumption to make is that it's a small-sample shenanigan, and that an unusual percentage of Leone's swinging strikes have gone for strike three. That assumption would be incorrect. A quick look at Minor League Central's leaderboards reveals that Leone's 13.8% swinging K rate is actually below the league average of 14.27%. No, his extra strikeouts haven't come from lucky sequencing of swings and misses - because his extra strikeouts haven't come on swings and misses. They've been called.

So far in 2014, Leone has a 50/50 split of called strikeouts to swinging strikeouts, which is way out of whack with the league average 30/70 called/swinging split.* Now, normally we associate lots of called strikeouts with great command: Cliff Lee, of course, is the called strikeout king. But Leone's command is hardly Lee-like, as his above-average walk rate proves. So what's going on here?

*Finding the league average rate was surprisingly hard, as it seems no one's ever really looked into this before. I found a few different sources: this blog post declared the "called K to K ratio" to be around 26%, this one deemed it 24%, and this report called it 28%. Using data from Minor League Central, I pegged it at 32% and decided that my various sources agreed it must be somewhere in the 30% ballpark.

Curious as to the circumstances surrounding Leone's unusual number of called K's, I decided to use Baseball Savant's wonderful PitchF/X database search tool to find out more. And just like that, I found the answer. Behold: 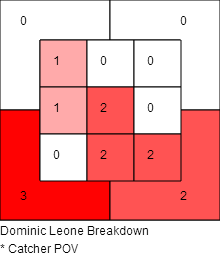 Right there's a bunch of strikeouts that shouldn't've been strikeouts.

Two years ago, I would've called it quits right there. "Leone's been getting lucky on called strike threes", I would've written, right before pronouncing him a below-average reliever doomed to stop getting K's. Luckily, though, it's not two years ago. Because today we know about pitch framing. Today we notice that all of those wrongly called strike threes were below the zone. Today we remember that the Mariners have this nifty new catcher, who's pretty good at getting extra-low called strikes.

Of course, Leone's pitched to John Buck, too. More than the average Mariner has, actually. And John Buck really sucks at pitch framing. But here - have a graph: 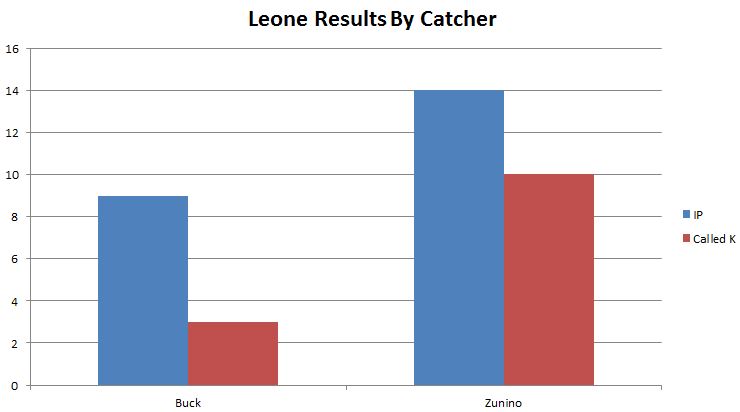 Buck's getting Leone a called strikeout once every three innings pitched, while Zunino's racking them up at twice that rate. And as for the locations of those called strike threes? You guessed it: Zunino's got the four lowest. And seven of the lowest eight.

Two months into the season, we know a lot more about Dominic Leone than we did when he made his debut. As expected, he walks just a few more guys than your league average reliever, while getting more ground balls and allowing fewer hard-hit flies. Even if he struck men out at a slightly below league average rate, as his swinging strike rate implies that he should, that core skill set is enough to make him a perfectly serviceable middle reliever. After all, not everyone can be above average, and I'll take "decent at everything" over "Yoervis Medina" for my seventh-inning arm any day.

But that hypothetical is moot. Because Dominic Leone doesn't strike men out at a slightly below league average rate. Dominic Leone's got a secret weapon.