Mariners cancel out a day's worth of baseball, split doubleheader against A's

Felix was weird, Erasmo was weird, everything was weird. Being above .500 in May is also weird.

Share All sharing options for: Mariners cancel out a day's worth of baseball, split doubleheader against A's

There was a lot of weird baseball played by the Seattle Mariners today. It wasn't exactly Weird Baseball™ by any means, even though the first game of the doubleheader went to extras. But it was a weird day, and the quality of baseball played could be called few things other than "weird." Here are a sampling of the weird things that happened during the two games today--a little bit under seven hours--between the Mariners and Athletics.

So how about those games? Let's take a looksee, shall we?

As mentioned, Felix was on the mound for six innings today and didn't get a single strikeout. He was pitching to contact like he was Chris Young or something, and despite looking so un-Felixlike, he survived a lot of danger. 11 hits and only three earned runs? Yeah, I'm not sure I trust anyone else to get that line at the end of the night. This was all so bizarre that many had started to speculate that Felix was told to pitch to contact on purpose, so as to get through seven innings without daunting the bullpen by racking up an early strikeout pitch count.

I just don't see this happening. You would be an idiot to go up to Felix Hernandez and tell him to do something other than what he is capable of doing regardless of how much baseball is left on the calendar. Felix doesn't get pulled early when he's racking up strikeouts, so that seems a bit strange. Can you even see him wanting to do this on his own? Nah. In the postgame interview, he chuckled and rolled his eyes incredulously. He of course refused to say anything was wrong, but he was clearly embarrassed over his performance.

I couldn't help but notice that Felix looked a lot thinner during the game. It was probably just my brain playing tricks on me, but Shannon Drayer did mention he lost nine pounds last week fighting the flu. Here are two quick pictures to let you decide, one from Opening Day last year, and the other from today. Keep in mind the usual re: camera angle, placement, zoom, etc. There doesn't appear to be a huge difference beyond wearing his uniform tighter, but heck, maybe that's part of it. It could explain at least some of his recent struggles. 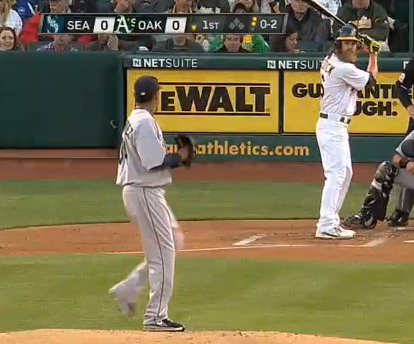 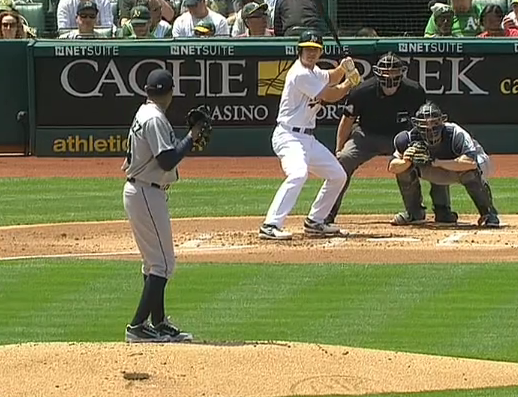 But the rest of the game! The Mariners had themselves a bit of fun in the box, watching Corey Hart and Mike Zunino hit home runs early in the game, as well as producing here and there from the bats of Cano and Smoak. In fact, it only took a few minutes into the tenth to get the M's on the board, but you have to wonder how scared everyone was of facing unending extras during the first game.

It was close for a minute, too, as Yoervis Medina came in during the ninth and appeared to almost lose the game. After a leadoff HPB to Former M's Beard Hat Progenitor John Jaso, Medina struck out Donaldson and intentionally walked Brandon Moss. Cespedes moved them all up with a force out, and everyone's favorite nerd Jed Lowrie came to the plate with two outs and two on. He whacked a huge fly ball out to the track caught by Stefen Romero, and it really, really looked like a walkoff win was in store for the Oakland crowd that spent the rest of the day booing the scoreboard operator, Daric Barton, and probably some little kids or something.

The Barton booing was a result of a two-out single off the bat of Justin Smoak, deflected by Barton's glove to score Saunders from third. Immediately afterward, Seager singled in Cano, who was intentionally walked, and it was 6-4 Mariners. Rodney needed only a few pitches, and the game was soon over. Thirty minute shower/bathroom/sandwich/charge phone break. Commercials. I was hoping some team would change uniforms or something, but of course not.

Before we move on to game two, take a peek at Hart's solo HR from the second:

This didn't sound like a dinger off the bat to me, and I honestly looked back down at my laptop immediately afterward, thinking it was a foul ball. But nope! Hart, when used as sparingly as he has been, has been a pretty nice surprise so far. He's still only trotting out a 95 wRC+, and he is only slugging .396. Still, you can see that something is there, bubbling beneath the surface, waiting to be let out. You almost have to wonder how often Wedge would have trotted him out in right field so far this year, and Lloyd's restraint over letting him wear a glove seems wise so far. That said, he's got a long way to go. But good feelings, here, good feelings.

Thanks to MLB's rules for doubleheaders, the M's were able to add Erasmo Ramirez to the 2526 man roster to make the second start, and he actually didn't look horrible. The M's ended up losing the game, but they only had three hits, coming off the bats of Cano, Smoak, and Kyle Seager. Of course, if the M's are ever three-hit again, it will be Cano and Seager with two of them, and it seems only fitting that some rotating busted prospect fill the third on the failure carousel, but what are you going to do.

No, seriously, the M's lost the second game of the day, but they have had an incredibly promising week. Since their eight-game losing streak, they've only lost three games. That's three games in thirteen days, which felt really nice as my fingers typed those words on my keyboard. Moreover, they have done this without Walker and Paxton, and with Felix looking like bizarrofelix in his past three starts. Things are looking well.

Although LLoyd was conservative with the bullpen in the first game, he still only used two pitchers in the second, taking Erasmo out for six where he looked...well...like old Erasmo Ramirez. This, of course, happens once he's off the 25 man roster and pitching in a burn-the-innings game, but success is success, isn't it? Ramirez gave up six hits today and struck out four, but the best part was that he only walked one. His big mistake came on a solo home run to Yoenis Cespedes in the fourth, but his first run came on a productive third from Gentry and Jed Lowrie. Here's the home run to Cespedes: 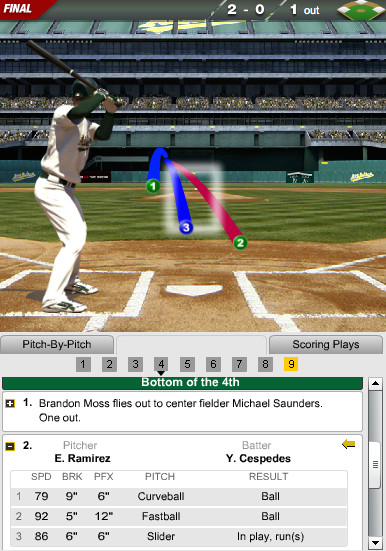 Not necessarily the sexiest pitch sequence or anything, but this was far from a mistake. He didn't leave it up in the zone. Cespedes is damn good. No, the biggest problem in the second game was that everyone had been playing baseball for five hours, and seemed to collectively make eye contact, mutter fuck it, and swing freely to make their dinner reservations at the local Radisson on the Wharf. They lost the game, but remain one game above .500, and they didn't even need Felix to do it. Imagine what this is going to be like when the King takes his usual July form!

The bad news, however, is unequivocally Brad Miller. Brad looks hopelessly lost at the plate, swinging at just about everything and staring at pitches not because they are out of the zone, but because some little tick in his brain told him not to swing at everything. It's so bad that he came out after the half-hour break between games with his pants rolled down and his signature long-sleeve undershirt removed. Desperate. Lost. No clue how to fix it.

The biggest eye-test for Miller's struggles, though, have been his defensive miscues over the past couple of games. Brad Miller is by no means a Andrelton Simmons in the field, but he's already almost matched his error total from last season in half as many games with four. This isn't because Brad Miller is a bad defender. It's because Brad Miller is probably walking out of the dugout thinking about the Wendy's drive thru near Cheney stadium and the inevitable plane ticket he has waiting for him. He can't seem to focus at all because he seems to be over-analyzing every tiny thing as if there were missiles falling from the sky, and he was the only one with the codes to the nuclear football. I don't know what it will take, prolonged benching, a trip back to Tacoma, or even just riding it out, but poor Brad needs a little something. Here's to hoping he can turn it around soon.

Jeff used to close out game thread's with a LET'S GO M'S! toward the end. Well, we are done with game threads for the day, but I can't help feel that things are going well enough to not think about how we are going to share suffering as one, but rather, how the M's are going to pull off a win against Kansas City tomorrow. It's still May, but it feels nice. Let's see how long we can take this, no? Let's do it. Let's go M's.