Since Abraham Almonte's demotion, the Mariners' #1 hitters have been awesome. Awesome in unexpected ways.

When Lloyd McClendon handed Abraham Almonte the lead-off job right out of Spring Training. we here at Lookout Landing were... confused. Almonte, while toolsy and fun to watch, seemed seriously underqualified for the job. "Sure", we thought to ourselves, "he has many of the typical lead-off qualities - speed, aggressiveness, and less-than-stellar power - but that's not enough to pencil a guy in for 700 PA." In our minds, the clear choice for the first spot in the lineup was Brad Miller.

So, uh, we were almost right.

But after 100 disastrous Almonte PAs crippled the offense for almost a month, McClendon decided it was time for a change. The Mariners demoted Almonte to AAA, called up James Jones, and handed the lead-off job to Michael Saunders. And then a funny thing happened: the Mariners' leadoff hitters became good. Good in ways that they hadn't ever been before.

Since Almonte's demotion, the Mariners have given out 106 PAs in the lead-off spot. Playing time has been split right down the middle between Saunders and Jones (who took the job by crushing the ball in his first few games and being more stereotypically lead-off-y). Between them, they've posted a 116 wRC+, smack dab between Robinson Cano and Kyle Seager's respective season marks of 117 and 115. Over the full season, only eight teams have seen better production from their first hitters. 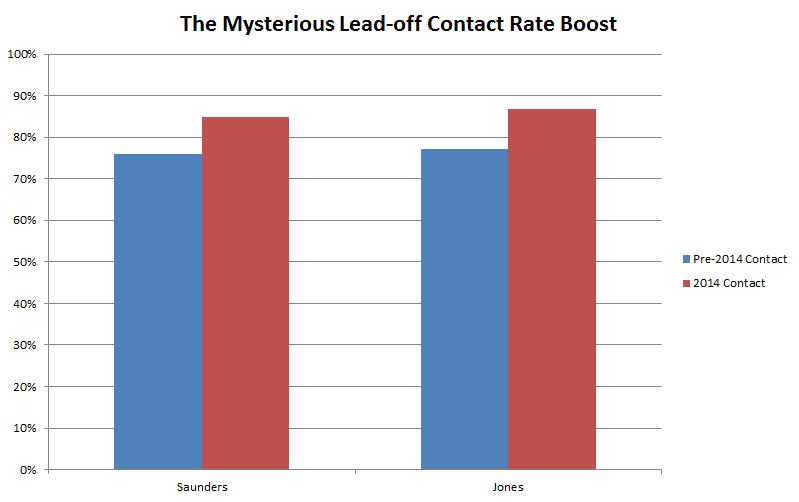 Saunders and Jones, see, have both sent their contact rates through the ceiling. Before 2013, Saunders could be relied upon for a ~75% contact rate, four or five percentage points below major league average. This year, he's kicked it up ten percentage points, which is more than a full standard deviation. The data for Jones is a little spottier - unlike Saunders, he has yet to reach the 100 PA threshold for contact rate stabilization, and the "before" sample is from MinorLeagueCentral's sometimes-unreliable plate discipline data - but the effect is just as noticeable, and perhaps even more crucial to his career.

Saunders, of course, has been successful before with limited contact skills. For the last two years, his good power has made up for a lackluster K rate to make him a roughly average hitter. Jones, though, doesn't possess Saunders' power stroke, and for him this contact rate improvement could be the difference between success and failure in the major leagues.

To illustrate this point, I whipped up a nifty little spreadsheet, which you can download here. This spreadsheet uses my old standby, Swing%/Contact%/ISO comping, with the new twist that the comps are ranked by their Z-Scores' Euclidean distance to Jones' numbers. I didn't rely heavily on ISO this time around, since Jones has 60 MLB PAs and ISO doesn't stabilize until 630, but even with only swing and contact rates some pretty interesting factoids presented themselves.

To wit: Jones' minor league swing/contact profile was that of a major league slugger. His top comp was Matt Holliday; in the 10-12 slots were Joey Votto, Carlos Beltran and Adrian Gonzalez. The top 25 comps averaged a 115 wRC+, which is pretty fantastic. There's just one problem: those guys all have big power, and Jones doesn't. And the players who posted seasons with that profile and low power (.100-.140 ISO)... kind of sucked. Not only that, but there weren't very many of them. Players with the "slugger" swing/contact profile, without the "slugger" ISO, don't tend to stick around in the major leagues. Those that do, like Brandon Crawford and Leonys Martin, have to be plus-plus defenders to merit starting jobs.

On the other hand, Jones' major league swing/contact profile to date has been that of an entirely different class of hitter - a class of hitter that strikes out a lot less. The top comp from my spreadsheet was the unsexy Jordan Pacheco, but also on the list were names like Ichiro Suzuki, Omar Infante, Alex Rios (twice!) and Erick Aybar (three times!). While this group's average wRC+ was significantly worse, that was due almost entirely to their lower ISO. The members of the new comp group inside Jones' .100-.140 ISO range averaged a wRC+ ten points higher than those in the old group. Tellingly, there were also twice of many of them as there were "low-power sluggers". Clearly, this is a much more viable offensive approach for a guy with Jones' power.

Either way, James Jones is no sure thing. It's only been 60 PAs, and a lot of his value rests on his defensive numbers anyways. But he's much more likely to be a successful hitter with the kind of approach that he's been employing in the major-league lead-off spot than he is to be successful with the one that he used in the minor leagues. The question is, is this plateau leap real? Is it sustainable? Unfortunately, the numbers have no answers for us here. In this small of a sample size, we must fall back on the scout's eye - or perhaps the player's.

"I'm just going to try to put up a professional at-bat. Depending on the situation, you usually only lead off the game once and that's your first at-bat," he said. "We've seen Lewis before. I'm not necessarily going to go up there and take pitches. I'm going to be selectively aggressive, and that was my mindset when I was leading off last year. My main goal is to get on base."

Of course, two weeks later, he said he wasn't doing anything out of the ordinary. And Jones hasn't been asked about it at all, as far as I can tell. But if the players really are changing their approaches to fit their new jobs at the top of the order, which seems intuitively possible... that's pretty interesting.

This, like everything we write about in April and May, could be nothing. Especially in Jones' case, there's every possibility that the lead-off contact magic is really just the product of my overactive imagination and some fluky numbers. Unfortunately, at this point in the season, it's "write about SSS" or "don't write at all", so... I present you with Michael Saunders and James Jones' contact rates.

May they remain forever high.