Reasons for regression: on hard-hit balls and warm weather

A quick look at two big reasons why the Mariners' offense should improve.

Share All sharing options for: Reasons for regression: on hard-hit balls and warm weather

Thankfully, it doesn't have to always be in the face of all evidence. It does a lot—or seemingly so—but not always. Sometimes there's perfectly normal evidence for improvement, as there is now with why this offense isn't doomed to continue on its current pace.

ESPN's Mark Simon has, every Monday, been circulating a few charts on hard-hit balls: which teams and players have been hitting them, and what's happened when they've done so. I mention that I suspect you've probably seen them because the Mariners continue to hang out around the same spot in the rankings for which team hits the ball hard most frequently. That'd be this spot. 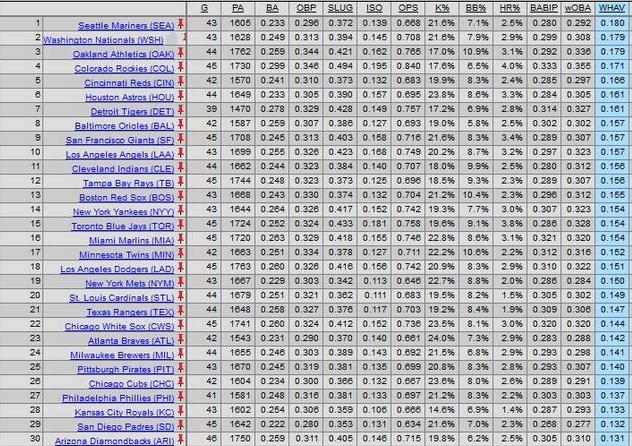 So what do these numbers mean, and where do they come from? Well, they're "data" in the way that UZR is data. It isn't completely objective, it comes from people. Simon's own images explain that they're result of video review, in which balls are categorized by human trackers as "soft-hit," "medium-hit" and "hard-hit."  He says "the trackers are looking for when a hitter gets 'beneficial trajectory, velocity and contact on the barrel.'"

Well, what the hell's going on? Why aren't they hitting then? Here's another chart from Simon, this time re-sorted by teams' average on those hard-hit balls. And, yeah. 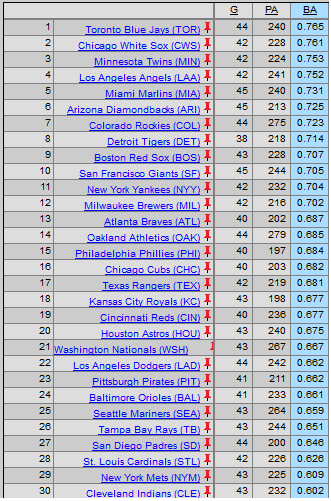 Simon explains that this hard-hit ball data is good for identifying players and teams who may be running into a bit of tough luck. And that probably goes a ways in describing a lot of it, I'd suspect. But you have to wonder if there's something more here, particularly in looking at Seattle, which has always been offensively anemic. Is there something else going on?

The quick excuse, the one we frequently hear, is "marine layer." Because of Seattle's relative proximity to the ocean, and increased proximity to the Puget Sound—combined with the damp and dreary weather that rolls over the Olympics and into our fine city—the air is thick with moisture, and that's going to slow the ball down. Or something.

Easier explanation: it's just colder. That's it. Ignore all the other math, and even the specific quantities of the axes below. Here's what happens to air density as temperature increases: 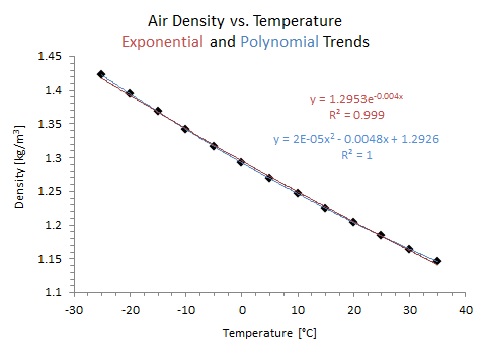 Now, I know what you're thinking, Seattle isn't that cold. It doesn't even snow here, usually. But think about how many major league cities are consistently colder than Seattle once late spring and early summer roll around. Go ahead, run through them in your head. There aren't many.

Or, to be a little more specific, let's lay it out. Here's how many games teams have played with a game temperature at or below 60 degrees. 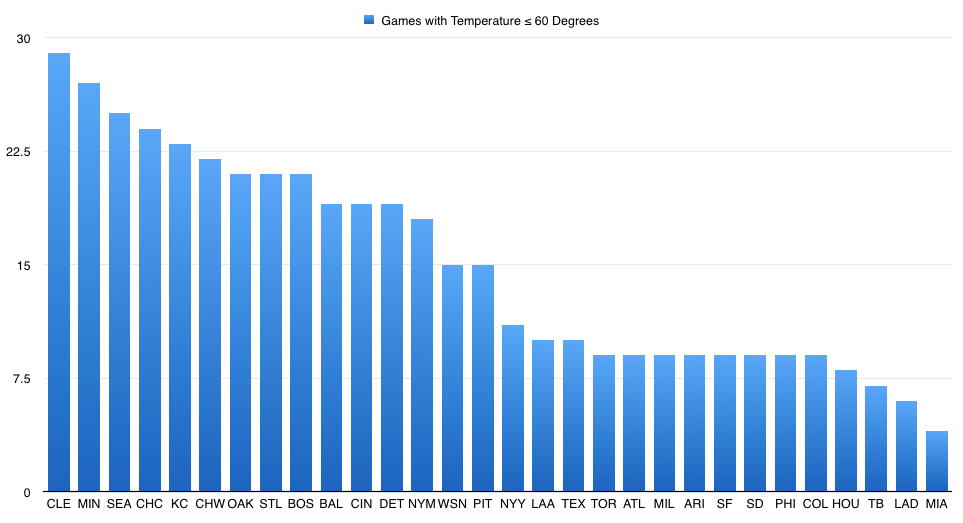 There the Mariners are, with the third-most at 25, trailing only Cleveland and Minnesota. Now, there isn't an exact correlation here, because there's too much noise in the data, but it is interesting that the team with the most cool games is also the team with the worst luck on supposedly hard-hit balls. I don't know what's going on with Minnesota though.

Also, it's my understanding that game temperatures are taken at first pitch. If there's a city or place that cools down quicker than Seattle after the sun sets and the wind starts blowing, oof, I'd hate to watch a ballgame there.

Now, if you're looking for more, there are plenty of studies on how temperature affects the flight of a baseball. And I wish the Hardball Times story in there still had working images because it explains that cold weather also leads to increased strikeouts. And it isn't only air temperature that impacts the flight of a baseball, but also the temperature of the ball itself. An elementary school kid in California, with some help from his dad, figured that one out.

The rebuttal is, of course, is that the weather will heat up for everyone. And that's true, it'll heat up for teams around the country, and it'll heat up for the Mariners' opponents here in Seattle. So while some are quick to say now that, because some of the back-end starters have pitched above their heads, it won't make all that much of a difference once the rotation's fully healthy—I beg to differ. They're going to matter.

Now, when I lay out this data, I'm not asking that you walk away convinced. You don't have to have blind—or, well partially-educated faith that this team will turn around. Just know that it's possible. Hell, remember July of last year (credit: Jeff at USSM), with a team that may well be less talented than this one?

It can get better. And it should.