Two home runs from Dustin Ackley! One from Kyle Seager! A bunch more weird stuff! And a...oh a loss. 9-7 Royals.

Alcides Escobar hit a grand slam off Roenis Elias in the second inning. These kinds of things just happen.

In Escobar's case, though, it's the first time it happened. Ever. For the Mariners, in the abstract, its definitely not the first time it happened. Remember Joe Saunders? Remember Jeremy Bonderman? Second-inning grand slams usually tell the story of the whole game, and are the only parts you ever see on MLB Tonight after the game, except for the silly things coming out of the other pointless seven innings, like James Jones helping a kid steal a base as big as his entire body.

Thing is, though, that this game wasn't decided by the Royals' second-inning grand slam off Roenis Elias. Which is kind of crazy to think about, really. Yes, Elias got into trouble early, loading the bases after a bunch of singles to Royals hitters aided by poor fielding. Lots and lots of poor fielding. These are the worst kind of meltdowns to witness--instead of a fifteen-pitch dinger-fest from Joe Saunders, you get to see someone like Elias getting nearly playable balls botched by the infield, raising his pitch count high, fast, early. Not all of these were playable for sure, but the Mariners really didn't help him out today. Their five errors can attest to this.

Then, in the third, Dustin Ackley came up and walloped an 84 MPH slider from Jeremy Guthrie and deposited it behind the centerfield wall. It was his second home run in as many plate appearances, tracing back to yesterday. It was really impressive too: look at this stance, the bat reaching down and almost out of the zone, his feet crooked like a nervous eighth-grader at his first Sadie Hawkins Dance. Which, if you think about it, is just about as Dustin Ackley as you can get. 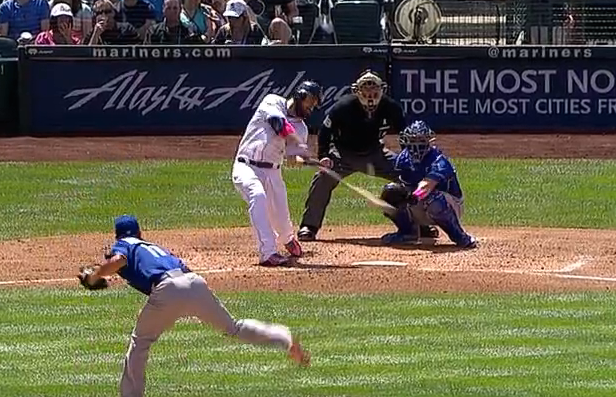 Immediately after this, Stefen Romero was hit by a pitch and sent to third on a Mike Zunino grounder. James Jones bunted Zunino to second on a play that was probably all his idea according to Blowers on the broadcast. Then, up walked Brad Miller. Poor, broken, nervous, exhausted, confused Brad Miller. He worked a full count with a bunch of fouls and then magically made solid contact with a sinking fastball, sending it way over the head of Aoki in right field. Aoki was playing pretty shallow, because haha Brad Miller. But Miller won this battle, and I started to think that maybe, just maybe, Brad Miller has been pulling a long con on all of baseball with this awful April performance in an attempt to convince pitchers to start tossing him low 90's heat to destroy. Yes, yes, I like this story and I'm sticking with it.

The Royals plated another in the fourth after yet another error in the infield, scoring Johnny Giavotella, who was 2-3 with a walk in today's game. Elias was still looking a little shaky, but managed to get outs with pretty solid composure. Which, you know, Cuba, boat, blah blah blah. We don't need to run that into the ground anymore than it has been, but I think its safe to say that Elias is pretty damn exciting, and while he's still a little rough around the edges, he clearly has the mental composure to make it work up here. He had nine hits on the day, and saw five runs go across the plate. And yet, he remained in the game, head down, hitting his spots, doing his thing. Robinson Cano apparently called him "Felix Jr." toward the end of spring training, and just think if that was possible. EDIT 5/12: User qrsouther rightfully pointed out that this was Erasmo, not Elias. Well...maybe we should take Cano's words with a grain of salt.

The rest of the game continued in true bizarre fashion, with more errors (again, the M's had FIVE today. FIVE), back-to-back home runs from Kyle Seager and Dustin Ackley (again) in the fourth, and a James Jones double in the fifth. The Mariners were hitting and hitting well today. It's almost like the abysmal rainy and cold April that dominates the national conception of Seattle offense--dead, stagnant, chilly--always goes away when the sun starts to come out in mid-May. And you would think we would start to realize this, but meh. It feels good when it finally happens, and if not understanding it produces good feelings then I'm just going to keep on not understanding and just watch Dustin Ackley hit some home runs.

Ah, that hit the spot.

Speaking of hitting the spot, we now need to talk about Danny Farquhar's strike zone today. Or, I should say, AAA PCL umpire Marcus Pattillo's strike zone. Actually...honestly, it wasn't really any worse than a typical zone, and was honestly better than anything Angel Hernandez could have done. Danny Farquhar came in and had a pretty rough seventh inning, but almost got out with two no-call strikes to Danny Valencia, who earned a walk. He should have been out, and the rest of the inning saw the Royals pull ahead of the Mariners with a sac fly and a home run to Johnny Giavotella, and the M's wouldn't ever have the lead again. Here's the righty zone, which includes Farquhar's two balls towards the top of the plate. 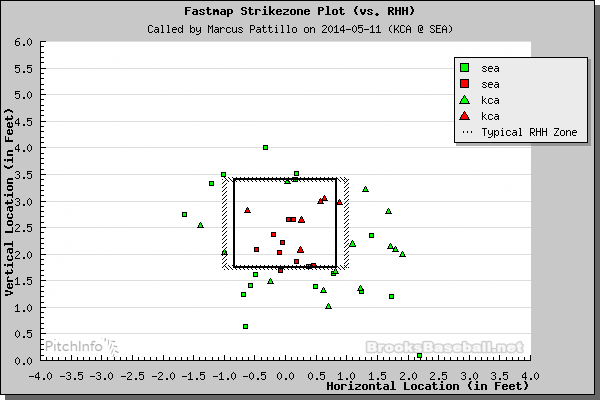 Annoying, for sure. But this zone isn't egregious at all, and the Mariners didn't lose today because Farquhar didn't get these calls. The Mariners lost today because they made a whole shit ton of errors and Danny Farquhar wasn't himself and Roenis Elias was shaky. That's why the Mariners lost. The good news is that it was a bit of a grown up loss--dirty for sure, but not sad. This was the kind of loss that good baseball teams find themselves on the end of from time to time: competitive until the last pitch, random blunders from players having brain farts instead of consistently awful performances.

Well, the infield errors might be somewhere in the middle. But regardless, the team is still above .500, three and a half games out of first place, and currently have themselves a new centerfielder that will assuredly come back to Earth soon, but may be capable of a few weeks of brilliance. That's a good spot to be in.

Joe Maddon brings his weird circus to town next week, and the Mariners will get to beat up on a Rays team that finds themselves sitting with a nice 16-22 record. It will be nice if that trend can continue. We'll see if the M's can help it.