The Angels one-hit the Mariners with a 2-0 victory Wednesday evening. Wash, Rinse, Repeat

Well the Mariners are back, and not exactly in the way we imagined. See, they first came back on March 31st, playing game one of the 2014 season and returning from their scheduled off-season break. Then, they came back last night, in the sense that they actually geographically came back to the town in which they usually play about half of their baseball games in. Then today, The Mariners came back. You know, The Mariners. A Chone Figgins popup caught in the foul territory next to third base. Erik Bedard walking three batters in the fourth inning. Brendan Ryan bunting with no outs and no one on in the 9th during a 5-0 game. The Mariners.

The Angels one-hit the Mariners today. One. That one hit was a little blooper out into right centerfield off the bat of Abraham Almonte in the third inning, and afterwards a couple Mariners would also reach base, like when Brad Miller blew right through a throwing error to first and Justin Smoak drew a walk in the ninth. But other than that, there was a lot of looking at moving baseballs and trying to catch up to the Angel's confusing and complex Garrett Richards, who posted a FIP of 6.95 in 2011 and now averages 96 on his fastball throughout seven innings.

Garrett Richards has been kind of dinger-prone, but today he got six strikeouts while giving up only about two or three well hit balls to M's bats. Each died on the warning track, blanketed in the (cold) embrace of the Pacific Northwest nautical breeze in April. The good news for the Mariners is that they are going to play the Angels in Safeco again at the end of May, and they might be able to get a summer redo of this whole mess. But hey this one still counts so, well The Mariners.

Elias wasn't terrible tonight, and LLoyd even said he thought the rookie threw better today than he did in his infamous dodecahedronized-zone start in Oakland last week. There were certainly a few quizzical calls over the evening, but the zone was weird both ways: Elias just wasn't hitting his spots. Look at this: 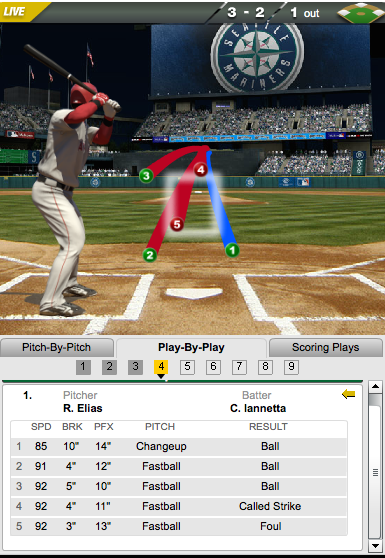 Those corners aren't going to paint themselves. From the eye and ear test, it seemed like he was having trouble mixing his offspeed stuff into his delivery in the evening. He kept throwing it too, even after he got into a little trouble--his curve would often just keep rolling out of the zone, and his changeup wasn't staying down when he needed it to. In fact, that was his exact mistake in the third, when he threw this to Albert Pujols: 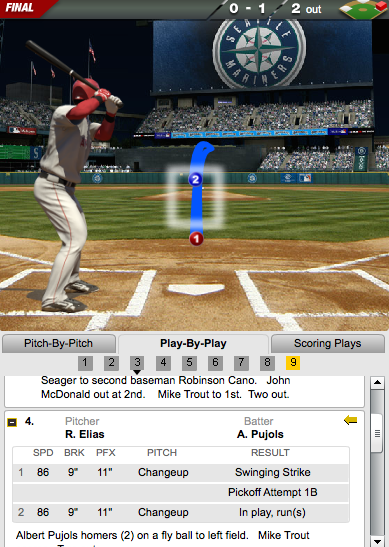 We've all had our fun looking at Albert Pujols over the past couple of years. He signs the contract and then starts his scheduled aging decline on the same day in 2011, and the Angels become the laughing stock of the entire non-Astro American League. Well, there are still places through this franchise from which we can draw schadenfreude, but Albert Pujols is really good at hitting the crap out of baseballs. Even if he doesn't put up monster numbers anymore, he's still going to put an 86 MPH changeup in the top half of the middle of the plate into whatever parking lot sits behind whatever stadium's left field wall.

It's still nothing to be too worried about. We've actually been enjoying watching Mariners games because they haven't been total clusterfucks so far--and this, to me anyway, kind of obfuscates that they've been pretty damn lucky so far turning what isn't supposed to be quality yet into quality, injury aside. Paxton has been crazy. Miller's off to a slow start but that isn't probably going to last. Walker is coming back soon. Morrison has yet to look like an idiot in right (he even made a pretty great diving grab tonight that could have had a better route but...an out's an out!). And, oh yes. Roenis Elias hasn't seen a minute of AAA and is actually passable in the bigs so far. That's good news.

It wasn't just that the Mariners left their bats in the dugout all night. There were a number of bizarre plays all throughout the evening, from Justin Smoak diving away from an infield dribbler, Brad Miller moving his glove away from an absolutely-dead-on-arrival Kole Calhoun and missing the tag by centimeters, and so many walks left staring at soundless bats swinging through the strikezone. But mostly it was just The Mariners, flying out on the warning track or slapping the tippy top of the baseball right into the awaiting glove of whatever Angels infielder was waiting for it. You know. The Mariners.

Lost in all this was that Joe Beimel had himself an okay outing, replacing Dominic Leone who had himself replaced Elias after he threw 91 pitches in five frames. He struck out the first batter he faced, Ian Stewart, but then put John McDonald and Collin Cowgill on base moments later. That isn't good. But what was good was that they were both groundballs, poorly hit. Yeah, it's cold and all, but Beimel's xFIP has always hovered just under 5. He hit his spots well, mixed things up nicely, and looked like he was in control for the most part. He has a long way to go to Oliver Perez himself out of the M's pen this year, and hello SSS, but it's kind of nice to know that hey, you never know. Which you can't really know if the point is you never know but maybe this just proves that baseball is going to just kind of do whatever it wants to do when it wants to do it, and you can just sit down and watch like the happy customer you are. Which, well, I'm still watching so something must be working.

It was a bit surreal, then, to see the Angels' arms do well. It wasn't surreal to see the Mariners do what they did, but it was maybe a little too familiar after getting off to a 5-2 start with real offense. It's still early, and there isn't much to worry about. But this was kind of like when you have an ant problem in your kitchen, and you finally get them out with terrible ant repellant chemicals. You think you have the problem fixed but then a week later they come back and are crawling around like the little assholes they are, and now you have an ant problem and a toxic-chemical problem in your kitchen. You lose. Twice.

I don't know if the Mariners lost twice today but if anything, it felt like the ants were back. But you know, whatever, Robinson Cano is still on the Mariners and that's only just starting to wear off.