Erasmo Ramirez likes to promote a stable energy flow throughout his body with this necklace. But will he miss enough bats in 2014 to remain effective?

Whenever I think of Erasmo Ramirez I can't help also thinking of Jeremy Bonderman and Aaron Harang.

Headed into the 2013 season, it was the opinion of many prognosticators that Ramirez possessed enough stuff to slot as the Mariners #3 or #4 starter. As it happened, because of the gritty veteran presence of Bonderman and Harang, Ramirez had to wait until Eric Wedge skippered the Mariners into an iceberg before the Ramirez family phone rang.

2014 has brought a new manager, and ostensibly a different opinion of his stuff. Ramirez had a particularly titillating (yes, titillating) Spring, in which he posted a 1.14 ERA over 23.2 innings pitched, giving up just 18 hits while striking out 20 and walking a stingy two batters. Those results, mashed up with a dearth of grown men with healthy arms and the damaged pride of one Randy Wolf, and poof -- Erasmo Ramirez is your #2 starter.

But something is different about this Ramirez, at least over his first two starts. And yeah, small sample size police and everything, but the changes in the frequencies and velocity are pretty significant so far in 2014.

Now, there are few pitch classification programs that agree 100%, so things are a little different depending on whether you like Baseball Info Solutions or PitchF/X or nerd in the bleachers with binoculars. But all of the data I've seen on Ramirez has enough of a story to tell that it really doesn't matter if one thinks his sinker looks like a two seam fastball.

Using Brooks Baseball, here's the repertoire Erasmo Ramirez used between his major league time in 2012 and 2013:

And so far over his first two starts in 2014, here's the pitch selection Ramirez has used:

Or, if you're more of a graphic-visual learner like me, let's look at the change in distribution in colors a little more like the Seahawks than the Mariners, but oh never mind: 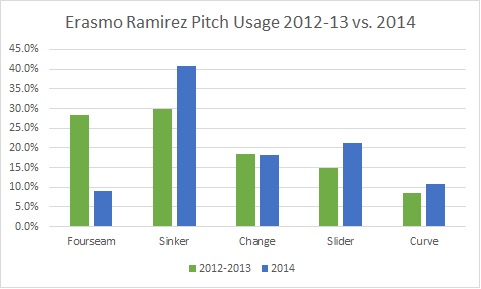 Stating the obvious -- Ramirez has abandoned his fourseam fastball in favor of many many more two seamer/sinkers, and to a lesser extent, more sliders. Now this could certainly be affected by the handedness of the lineups that the Athletics and Angels trotted out there, and this could absolutely normalize over the next handful of starts. But something else is going on right along with the change in repertoire. His velocity is out of whack.

Ramirez's two seamer has historically averaged around 93 miles per hour and so far this year, it's about two miles per hour slower. Yes, there's evidence that velocity increases over the course of the summer, but I'd buy two miles per hour a little more if his first two starts were in a chilly Seattle setting instead of southern California. He's also throwing his slider and curve marginally faster than he has in the past.

This could all be by design in an effort to get his control, well, under control. Because when he can throw strikes he's the 2012 version of himself where he had the tidy little 3.55 FIP and a 20% strikeout rate with a 5% walk rate. When he's not exactly sure where the ball is going, you get the 2013 version of Ramirez with an 18% strikeout rate, 8% walk rate and not nearly as tidy 4.83 FIP.

It's hard to blame Ramirez, because 90% of his repertoire is moving all over the place. But as we know with watching the guy with the metaphoric crown pitch, there's being wild and then there's being wild within the zone. And so far, Ramirez has shown us both this year. He walked nobody and struck out six in his first outing and then walked three and struck out one in his second. But in general, it's interesting to see his location juxtaposed with his last two seasons. From our friends at Brooks Baseball:

See all the pretty red in the middle of the strike zone from 2012-2013? He's generally been living on the corners so far this season, and while that obviously worked once, it got him in trouble once too. Without leaning on a four seam fastball when he's in trouble, he's relying on hitters to get themselves out. Even when he's behind in the count, he goes to his four seam fastball 2% of the time against left handed batters and 15% of the time against righties. Working ahead in the count is a well documented key to successful pitching, but it is perhaps exacerbated with a pitcher like Ramirez.

Ramirez is inducing more swings outside the strike zone at almost 32% where league average is around 29% right now. That's up from 27% in 2013, but then again he's also been more hittable with an uptick in his contact rate.

It's probably entirely premature to dedicate this amount of text and these goofy images. But according to some widely cited uber-nerds out there, strikeout rates stabilize for pitchers around 70 total batters faced and walk rates stabilize around 160 total batters faced, so we should be able to start drawing tepid conclusions somewhere around the end of the month. As of right now, we've seen the two faces of Ramirez. I do like the modification in his repertoire, because when he was effective in 2012, his slider and change were his best pitches, followed by his sinker (two seamer, whatever). His success might hinge on his ability to locate the latter, however -- and it will certainly be something to look for as the season continues.