Praise be to Jack Z: The Mariners are one of only three MLB teams with four homegrown starters in their rotation.

The season-opening wins* by Felix Hernandez, Erasmo Ramirez, and James Paxton didn't just give the M's their first 3-0 start since 1995; they heralded the arrival of a progressive, success-friendly era at Safeco Field. Until last week, the Mariners hadn’t gotten three consecutive wins from homegrown starters since 2003.** Not coincidentally, that’s the last time this team was good.

Of course, to generate homegrown starter winning streaks, it's important to have homegrown starters. With Hernandez, Ramirez, Paxton, and Elias, Seattle is among an elite group of MLB teams with four of them.***

Assuming that Taijuan Walker takes Chris Young's notional role as 5th starter, the M's will briefly be the only major league team that's 100% locally-sourced. They'll go back down to four homegrown starters once Iwakuma gets back, but if that rotation sticks, it'll be the first season since 1988 that the Mariners' four primary starters all came from the farm.

By now you are asking, rightfully: Who gives a shit?****

And you have a point. In 2001, the Mariners won eleventy-billion games without a single homegrown pitcher among their top five starters. The Dodgers only have one homegrown pitcher, they're still likely to make the postseason. The problem is that—as we all learned in the mid 2000s—winning without homegrown starting pitching isn't a sustainable lifestyle.

Bill Bavasi inherited a franchise that wanted to compete for a World Series, but had failed to draft/develop even one replacement-level starter*****. Bavasi's desperate maneuvering to obtain quality starting pitching in the mid-2000s set the franchise back years. His moves were so impossibly disastrous, they'd be funny if they hadn't ruined my life.

In case you don't care to do the math, that's $20.7 million per WAR. Makes Cano's deal look like a bargain; he could match that ROI in two seasons. But, speaking of bargains, that’s not all! Bavasi also traded his few prospects for Erik Bedard and Horacio Ramirez. By my calculations******, the Mariners' net on those trades was -24.1 WAR. I'm trying to think of a real-world equivalent for Bavasi's deals: trading 200 Waygu beef rib-eyes for a half-eaten banana?

But here's the thing: It may not have been possible to do better. Bill Bavasi's bosses wanted him to contend, he knew he needed starting pitchers to do so, and he didn't have any starting pitchers in the farm system. Bavasi's solution—admittedly not a very imaginative one, but not out of line with common baseball practice—was to acquire, via trade and free agency, the few starting pitchers that were available to him. When you're down to your last can of Van Camp's Pork & Beans, because unsustainable farming practices and rising fossil fuel prices have destroyed modern agribusiness, how much do you think that splotchy banana is gonna be worth to you?

Happily, it looks like the mid-2010s will require no survivalist tactics (knocks furiously on wood). King Felix is signed through 2019, and the most experienced of the new sprouts, Ramirez, wouldn't reach free agency until that season. The M's cost for starting pitching should stay relatively under control, which is important, because with King Felix earning his well-deserved millions, the Mariners already have one of the more expensive starting rotations in the American League. 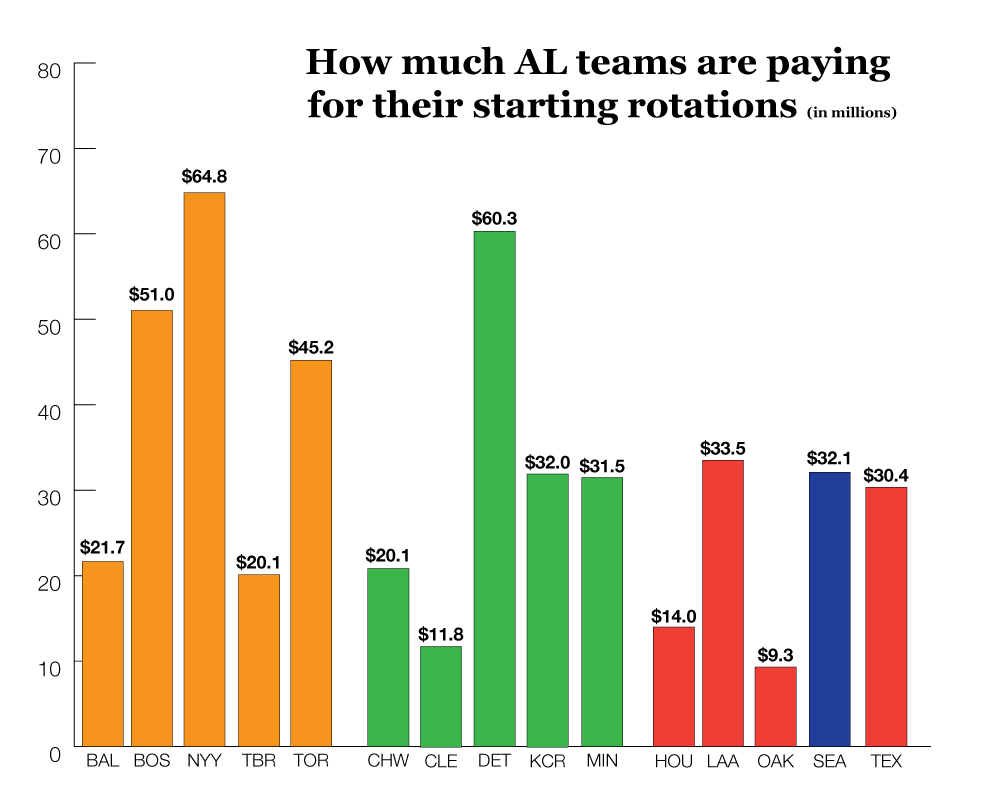 Expensive, long-term contracts for starting pitchers are probably the biggest risk a team can take. If a third baseman loses the skill to hit, he can still play the field. If he loses the ability to play his position, you can move him to another one or DH him. But when a pitcher suddenly loses the finely-tuned ability to get major league hitters out—which seems to happen over, and over, and over, he is simply useless. (Unless you can teach him to play outfield.) With a solid crop of starters coming up from the minors, the Mariners hopefully won't have to take that risk again this decade.

And this must be what drove Jack Zduriencik's offseason strategy. He was confident in the pitchers he'd developed, and so he skimmed the shoals of the free agent market for low-risk, high-reward pitchers like Scott Baker and Randy Wolf. With Paxton and Ramirez ready for the rotation, he didn't need to seek out that rare and potentially deadly catch of the free agent ocean, a top-of-the-rotation starting pitcher. Do you think there's a single moment this season when you'll wish the Mariners would have, say, outbid the Brewers on their $50 million offer to Matt Garza?

**According to my research, June 15-17, 2003, to be exact, when Gil Meche, Joel Pineiro, and Ryan Franklin won consecutive starts to give the Mariners a 7.5 game lead in the AL West. They haven't had as big a division lead since.

***Research note 1: For the "homegrown starters" I counted pitchers that have already started a game, or have been publicly named their team's fifth starter. I considered them "homegrown" if they were drafted/signed by their existing organization and haven't played for any other. I didn't include foreign pitchers who went directly to the majors (Darvish, Tanaka, etc.). For the "rotation costs" graphic I included the salaries of the starters I'd identified earlier, plus the salaries of any injured players who would be in the rotation if healthy.

****Okay, I have learned something.

*****Of the 146 pitchers the Mariners picked and signed in the June draft from 1998-2004, only 3 ever started a game for the franchise. Those three—Ryan Feierabend, Clint Nagoette, and Matt Thornton—made just 25 starts combined. In those games they were 3-15 with an 8.15 ERA. You can see why Bavasi was working the phones.

For the value of the player post-trade, I counted those years that he was under team control. So Bavasi gets credit for Bedard's 3.1 WAR in '08 and '09, but not the 1.1 WAR he posted in '11 after the M's signed him as a free agent. Likewise, Soriano's value in terms of the trade stops after '09, because he was a free agent after that season.