The Mariners fall to the Athletics 6-3 on Sunday and end their first road trip with a 4-2 record.

There are worse ways to lose a baseball game than having the tying run strike out looking at a pitch outside the zone, but then again it doesn't really matter because you're not supposed to lose at all. That is, of course, silly. Even the best baseball team of all time lost 46 games so if you think about it, maybe this loss is just one of 46! And to top it off, that aforementioned team was the Seattle Mariners, and if sharing the same color uniforms and hats means anything, then this 2014 Mariners team just may win 116 games! Wow!

Of course, calling the 2001 Seattle Mariners the best baseball team of all time isn't exactly accurate, because while the win-loss column is the only thing that determines making the playoffs, we all know that a bunch of smart math people have figured out other ways to measure on-field performance by millionaire athletes. So in this way, losing doesn't matter quite as much as we like to think it does. Some of the worst baseball teams of all time have been able to count some of the greatest baseball players of all time on their rosters. Felix won a Cy Young on one of the worst Mariners teams of all time. Philip Humber once pitched a perfect game and then found himself going to the Astros on waivers seven months later. Winning isn't everything! Losing isn't everything!

So of course I'm saying all this to preface talking about today's baseball game that was kind of a bummer. Yes, the Mariners lost 6-3 to the Athletics, but it wasn't really so horrible. The biggest problem, of course was Erasmo. Well, actually the biggest problem was the stupid A's, so let's say the second biggest problem was Erasmo. Erasmo threw three four-seam fastballs today and then moved primarily to his two-seamer, averaging right around 90 but topping out at 93. His command was spotty, and it looked like every time he was trying to throw something that moved, it moved the wrong way.

The A's first got on the board in the 3rd when Ramirez put two A's on base with hits from Eric Sogard and Jed Lowrie. Then Brandon Moss came up and did this: 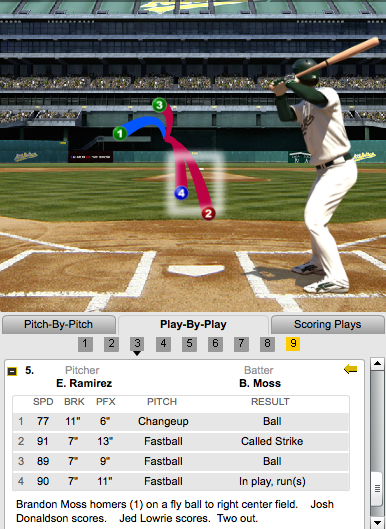 This wasn't the best sequence of pitches from Erasmo obviously, but the good news is that he obviously didn't mean to do this, which should be obvious. That sounds stupid. You aren't supposed to write sentences that use a single word that much, but you aren't supposed to pitch like this either. Erasmo knows that, and the good news is that he doesn't usually pitch like this. When Hector Noesi handed Coco Crisp a fastball right over the plate for the game winning homer on Thursday it was kind of exactly what he always did. When Erasmo walked three batters over four innings this afternoon it was weird, because Erasmo is a strike thrower who doesn't usually walk people.You know what else? Brandon Moss had 30 home runs last year. This dinger tied the game but didn't lose it so it's not even anything we should be worried about. 4-2, people.

What lost the game was the messiest inning from a Mariners pitcher so far this year--Erasmo's 5th. Which feels a little disingenuous to say being game six and all, but that's what makes this loss okay. To start the inning, Erasmo gave up a leadoff single to Eric Sogard, who grabbed second base on a wild pitch to Coco Crisp only a minute or two later. That didn't matter because Crisp walked seconds later. What did matter though was Erasmo's next wild pitch in the at bat to Josh Donaldson, which advanced both Crisp and Sogard into scoring position. This mattered because Josh Donaldson singled in Eric Sogard with a bloop single mere seconds later, and it was Nerd Patrol at the O.co. 4-3 Athletics.

Human skyscraper Chris Young made his Mariners debut once Erasmo was lifted in the 5th. He quickly gave up a sac fly to Jed Lowrie that was caught by Abraham Almonte and then subsequently dropped on the transfer for the throw. 5-3 Athletics. The play was immediately ruled a dropped ball, LLoyd didn't challenge, and Almonte threw to second to get Donaldson out on the force which was less your typical force out and more twelve baseball players confusedly scratching their heads in unison and looking for someone to explain to them what the hell just happened. Some people were complaining that LLoyd didn't use the replay option here, and I'm actually not even sure it was an option. Regardless, it wouldn't have mattered because the Mariners wouldn't score again, Cespedes would hit a no-doubter off Yoervis Medina in the eighth, and the game was already over. Even if he did use the replay review, I think it would have gone something like this:

LLoyd: Hey hey there boys I'm gonna need a replay of this here

Umpire: The catch or the force?

LLoyd: No, the game. The whole series actually. Can we just start this over and maybe not do any of these things the way we did them?

LLoyd: yeah boys but well, let's do a replay here.

Seriously though, there isn't much to worry about. In two days, the Mariners are going to make their Safeco debut coming off a winning road trip and a 4-2 record that is good for best in the AL West. Sustainable? No. Momentum-building? Good? Yes. In fact, the box score wouldn't show it, but new A's closer Jim Johnson had himself a vintage 2012 Brandon League ninth today, seeing him give up a leadoff walk to Kyle Seager and single to Michael Saunders before Abraham Almonte, the tying run, came to the plate with two outs. Almonte struck out looking on a pitch that wasn't a strike, but whatever. The Mariners lost the game in the fifth, not the ninth. That they threatened at all was ancillary. Good, but ancillary.

The Mariners' only three runs came in the second and third innings, which saw Abraham Almonte once again looking like a Yasiel Puig that you buy packaged in a store with a just-add-water byline. He needs a lot of water to look like the Dodgers' Cuban sensation, but I'll take him as he is so far. A few weird routes in the outfield, a mistake on the basepaths to end the second, and that weird dropped catch show he's still got some work to do. But when was the last time the Mariners fielded someone this exciting?

More good news was Condor's 2-4 day. He finally got the start in right with Morrison taking over at DH for Hart, and it was a welcome sight to see. Thing is, McClendon isn't an idiot. He knows that Saunders is a much, much, much, much, much better defender in the outfield than Morrison, and has been tinkering with the lineup to get guys first week time and see what he has. The efficacy of that can be debated, but one thing we honestly can't say (yet) is that he is as stubborn and bullheaded as some certain former Mariners managers could be at playing someone like oh, I don't know, fucking Miguel Olivo everyday. Here's LLoyd, via Divish:

I kind of don't even know how to react to that. It makes sense, passes the logic test, echoes what wise judges of talent and roster construction have been saying, and at the end of the day, doesn't sound like something anyone wearing a Mariners uniform would ever say. Revel in this. Soak it in. Wear it like a warm blanket. The Mariners may not win 85 games this year and they will have an even harder time making the playoffs, if that's even possible. But it sounds like the manager of the Seattle Mariners gets it and that's kind of exciting.

So there are things to be excited about (Lloyd, Cano, Miller, Felix, 4-2, Almonte). There are things to keep an eye on (What the hell happened to Kyle Seager?). Another thing to keep an eye on is your emotional reaction to this team. Because even though they lost today, they didn't lose like the 2010 Seattle Mariners. They didn't lose like the 2012 Seattle Mariners. And that's kind of the point: winning and losing isn't everything. Baseball is a lot more complicated than that. Now we just need to tell this to the people making the standings in the league office, because I think they should let the Mariners be in the playoffs even if they keep losing.