Some time soon, Dominic Leone is going to make his major-league debut. Here's what you need to know.

Share All sharing options for: Dominic Leone, reliever of interest

A starting pitcher on Clemson University's recently-deprived-of-Brad-Miller baseball team, Leone struck out just over seven men per nine innings while walking four and a half. He had an ERA north of 5.00; he allowed ten home runs in only eighty-four innings. When the Mariners took him in the sixteenth round of the 2012 draft, reaction was about as negative as reaction to a sixteenth-round pick can get. What the scouts saw, however, made all the difference: Leone had added a cutter.

Amazing though it is that Leone taught himself a new pitch by watching Mariano Rivera highlights on Youtube, and amazing though it is that he's added 7 MPH to his fastball since being drafted, this article isn't about Dominic Leone's past. This article is about Dominic Leone's present - as a member of the Seattle Mariners' bullpen. What can fans expect from the 22-year-old?

The obvious temptation with Leone is to compare him to the Mariners' last set of fireballing relief prospects: Stephen Pryor and Carter Capps. As indicated by my use of the word "temptation", this would be a bad idea. For all that Pryor's fastball is one hell of a pitch, his offspeed offerings have never been what one might call impressive, and Capps' stuff is a) nastier than Leone's and b) completely uncontrollable. No, Leone is his own beast, and he deserves more than lazy comparisons to pitchers past.

Both systems peg Leone for slightly above average walk rates, but that's where they part ways. Whereas Oliver thinks Leone will give up a roughly league average number of home runs, Steamer is of the opinion that Major League hitters are likely to jump all over him. Neither system thinks terribly highly of his strikeout capacity.

...well, that's not super encouraging. But hey, projections are just a starting point. Let's delve a little deeper. What did Leone do in the minor leagues?

The interesting thing about Leone's minor league numbers isn't the walks or strikeouts - it's the extra-base hits. More specifically, it's the lack of them. Upon looking at Leone's career lines, I'm not entirely sure where Steamer gets off projecting him to allow 150% the league average HR/9. Since becoming a professional pitcher, Dominic Leone has faced over 250 hitters and allowed sixteen extra-base hits. He has a career 0.59 HR/9, and that's with more than half of his innings coming in High Desert. For whatever reason, new cutter or new velocity or something else, since Leone left Clemson no one's been able to barrel up his pitches.

To be fair, no one could barrel up Stephen Pryor or Carter Capps until they got to the major leagues, either. But those two were extreme fly-ball pitchers, whereas Leone relies much more on ground balls. He's not Carson Smith - the M's other top relief prospect is reportedly nigh-impossible to elevate the ball against - but unlike Pryor and Capps, Leone's definitely got the balls in play working for him.

Minor League stats, of course, can only tell us so much. Sample size concerns, quality of of competition concerns, and reliever volatility concerns mean that trying to translate minor league numbers to major league numbers is often a fruitless venture. Sometimes, you just need a scouting report.

Luckily, we have one (of sorts) in Pitch F/X. Between spring training and a stint in the AFL, Leone's been in front of enough cameras that we have a pretty good idea of his stuff. Below, then, is an image from his Brooks Baseball Player Card. 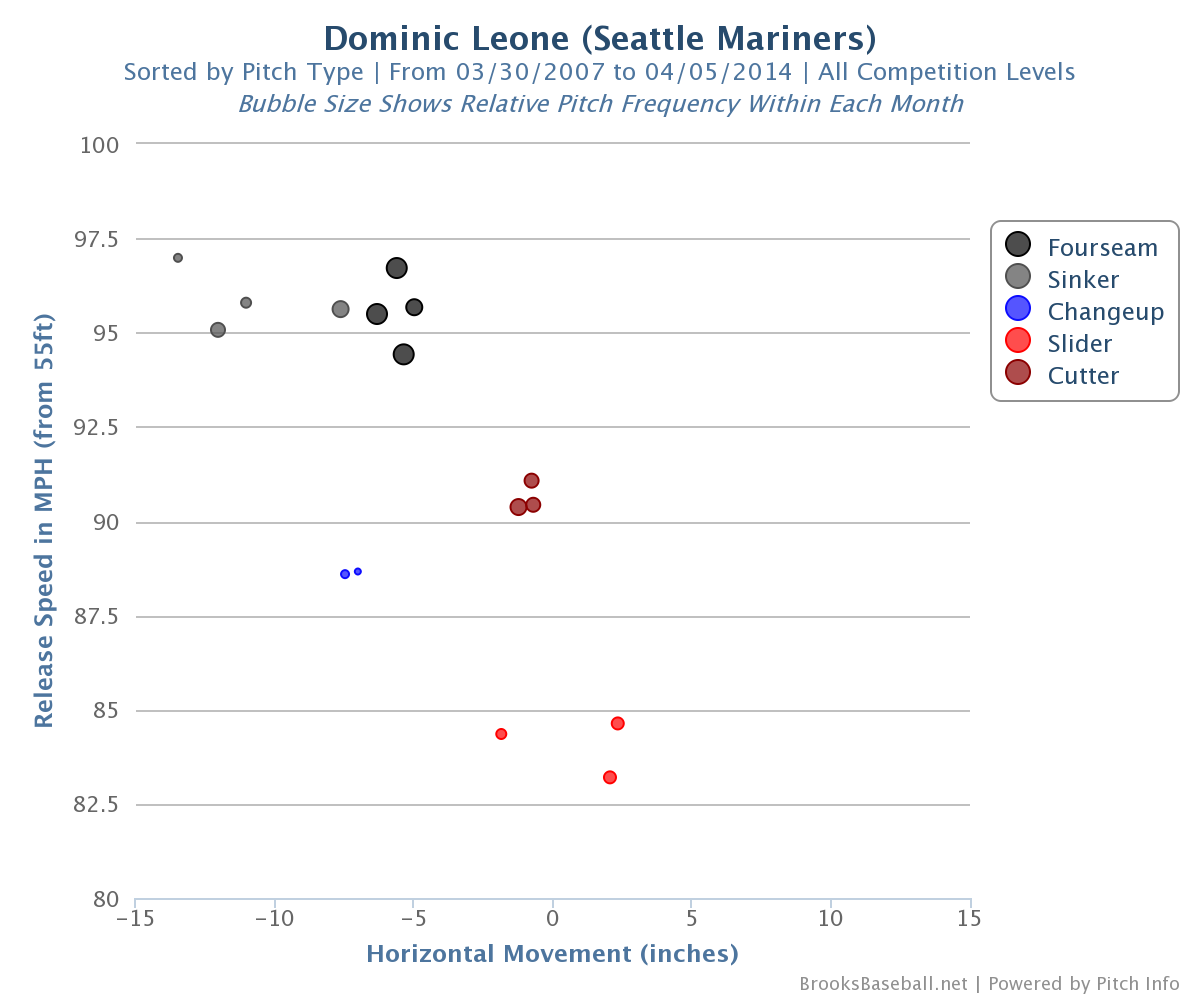 From the chart above, we can see that Leone relies primarily on a mid-to-high 90's fastball, which he plays against a low-90s cutter. Occasionally, he also mixes in a slider, a change, and a sinker. The sinker and fastball have strikingly similar movements, and the slider is considerably slower than the change, which is somewhat counterintuitive.

This is nice to know, but it's even nicer to be able to establish some pitch comps. By ripping data from Baseball Prospectus' PitchF/X leaderboards, I found the ten relievers with the most similar fastballs to Leone's in terms of velocity and movement. They are:

Obviously there are a lot of variables that aren't accounted for here, like release point, offspeed stuff, and deception, but any list that includes two relief aces, Kerry Wood, and Jeff Samardzija is a pretty good list to be on. That said, Tommy John surgery is a bit of a recurring theme with these guys, so that's something to keep an eye on.

Next up, the pitchers with the most similar cutters:

This is a less encouraging list. Jason Motte and Luke Hochevar are good relievers, and some of the other guys have had good years, but by and large they're middle relievers or swing men that didn't last long in the bigs. That said, unlike the pitches on the last list, these cutters have almost exclusively above-average run values. That said, those numbers might mean nothing. Pitch run values are often dictated by the interplay between pitches, and these pitchers obviously all mixed stuff differently than Leone will. At this point, the information available is so granular that it's difficult to correlate with actual results.

So... which of these three very different analysis methods should be trusted? It's up to you to decide, really. The Fangraphs projections are black boxes that sometimes whiff completely on relievers because of their inherent volatility. Minor league numbers are just one component of those projections, and they come against weak competition, but at least we have a better idea of what their flaws are. PitchF/X tells the truth, but it tells the truth at such a low level (pitch movement and velocity) that it's nigh-impossible to track that truth back up to actual results. Depending on which of the three you trust, you might think that Leone is replacement-level, a budding star, or... whatever conclusion you can draw from Pitch F/X. Your choice.

Here's what we know. Dominic Leone has great stuff and a great story. He's probably going to walk a roughly average number of guys and get 45-50% ground balls. The wild cards are strikeout rate (which could range from 6 to 9 K/9) and home run rate (which could be anything, because he's a reliever, but has historically been low). Some time soon - maybe even today - he'll make his major league debut, and soon after that we'll know a lot more about Dominic Leone.

Buckle up. This should be a fun one.