Share All sharing options for: Abraham Almonte: Doer of things

If I'm being honest I didn't pay too much attention to the Mariners last September. I allowed myself to get caught up in the good feelings of the mid July offensive surge, probably too much so. Watching August get stuck in the well worn rut of so many previous Mariners' teams left me sufficiently baseballed for the year.

As such I missed a good portion of the Abraham Almonte debut. I took note of his story, as I will always generally root for someone overcoming substance abuse issues. I certainly didn't think much about him. Any position player acquired by trade for a relief pitcher can't be worth much. Right?

That's a poor way of saying I'm late to the party on Almonte. Now that I'm here I must say it's not the funnest party I've ever been to. For one thing there's no alcohol. For another not everyone seems to be having a great time. We've got a decent group on the dance floor doing their best but it looks like one dude brought his yo-yo and I don't even want to start with the goths over in the corner.

What I will say about this party is damn if the supply of energy drinks is apparently unending. And we've got a smoke machine and a DJ and an in ground pool with a diving board and one of those cool garages with a flat roof you can stand on and convince yourself to try and jump into the pool from the roof because we are forever young.

There is a LOT going on at the Abraham Almonte party and it is all happening very, very fast.

Watching Almonte these first four games there's one player who kept popping up in my head: Yasiel Puig. They are, obviously, vastly different players. Yasiel Puig is a true 5 tool monolith. A man who's potential knows almost no ceiling. Almonte's abilities are sadly more limited. But the way they use their tools is what brings to mind the comparison. There have been forests chopped and squids squeezed dry writing about the various pros and cons of Puig's brick on the accelerator way of playing baseball. For every run the 100% style produces it invariably gives back in at least equal portion.

For anyone who had never seen him play Almonte offered the Cliff Note's version of his autobiography last night in one game:

Top 1st: Almonte opens the game with a grounder that transmogrifies itself past the glove of Alberto Callaspo. As the ball is retrieved by the 2nd baseman Almonte switches into what may best be described as Little League mode. 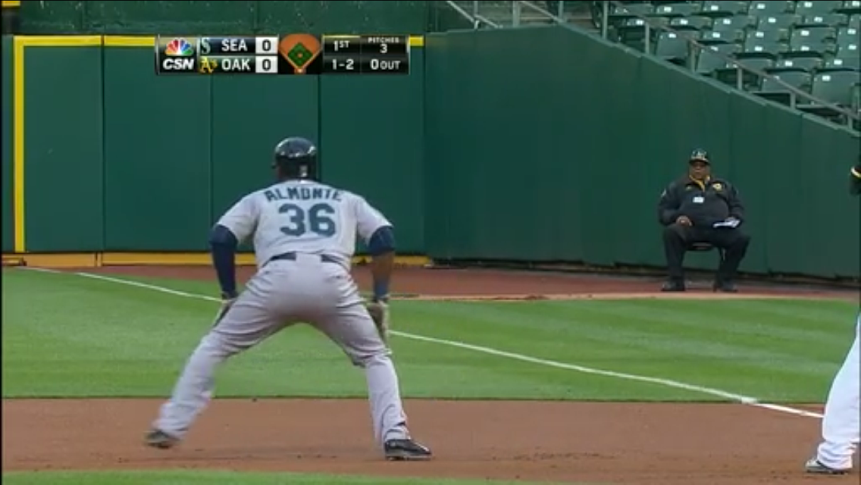 Almonte rounds 1st by about eight feet, turns his ass plateward and dares Nick Punto to throw him out. This is grade school baseball. I cannot recall a player so brazenly daring an infielder to try and pick him off. Somehow this triggered a primal response in Punto, who was perhaps confused by Almonte not sliding into 1st, and he actually threw the ball. It bounced off of Almonte's foot, he scampered to 2nd, went to 3rd on a fly ball and came around to score on a Robinson Cano groundout. Run: conjured from nothing but chutzpah. Almonte: 1, baseball: 0.

Top 5th: Rips a single up the middle to extend the Mariner lead.

What we have above is series of events, some positive and some negative. I am struck both by the quantity and variety of these events. Whereas a player like, say, Corey Hart's contribution to a baseball game boils down to the binary question of "Did Corey Hart hit a baseball hard yes/no?" Abraham Almonte will impact a game in a variety of ways.

He's going to thrill, exasperate, annoy, infuriate, and energize us every time he plays. He is a blind folded man swinging dual katanas. He is baseball nitrous. He's our little round ball of Puig. He makes me wait for tonight with a wince of excitement.