It might have even been worse than you imagined.

Share All sharing options for: Sean Barber and the Terrible, Horrible, No Good, Very Bad Day

You've probably read the recap by now. You know that Sean Barber, freshly minted major league umpire, had himself a disaster behind the dish yesterday. You know that he was wildly inconsistent, cost the Mariners several key strikes, and had a greater negative influence on the game than any umpire should ever have.

But the Pitch F/X data was incomplete, at least until this morning. Now it's up, and it isn't pretty. 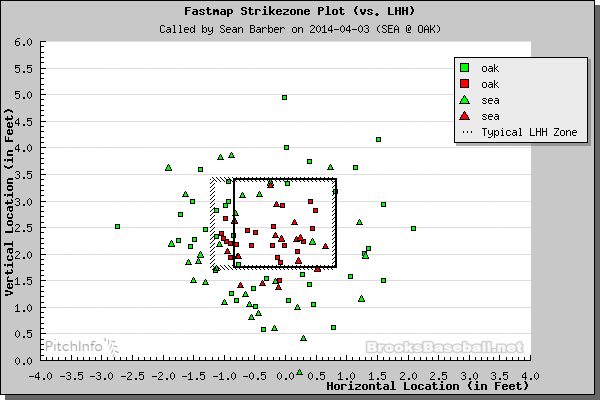 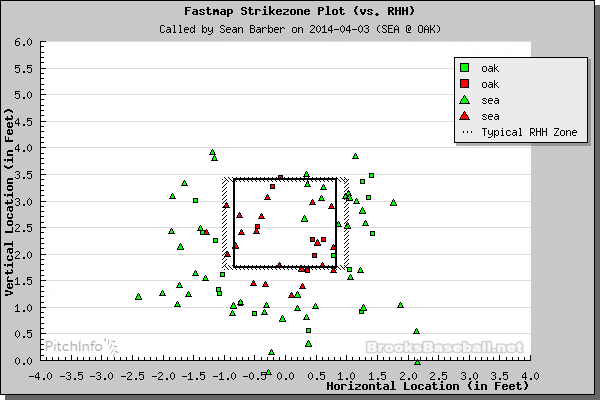 Just...man. Barber appears to call 14 balls as strikes throughout the course of the game, including 9 against Seattle. And that's just in the "actual" zone too. From Brooks Baseball:

These are from the Umpire's perspective, not the Pitcher's perspective. These strikezone maps are drawn to the specifications of Mike Fast, a former writer for Baseball Prospectus who now works for the Houston Astros. These plots show actual calls superimposed onto dashed lines that represent the strikezones that all Umpires generally call. The dashed lines shift to represent typical deviations for LHH and RHH.

Including that expected zone, Barber called 28 strikes as balls. This came to a head in the 9th inning, when Barber dug his heels in, refusing to give Danny Farquhar four obvious strikes at the top of the zone.

It wasn't just the missed strikes, either. Barber also called somewhere between 18-22 balls as strikes, especially at the bottom of the zone. All in all, depending on whether you prefer to use the expected zone or the actual zone, Barber missed somewhere between 32 and 50 pitches. There were 363 pitches thrown last night, and only a portion of those were pitches where Barber actually had to make a decision. Now, many of those were borderline calls that required basic judgment? Take those, and now add all the non-borderline calls that Barber missed. Think about the ratio of failure here.

You know what? Don't. Sean Barber probably didn't cost the Mariners the game last night, but he definitely influenced it and made it infuriating to watch. There's bad days behind the dish and then there's last night, and my guess is that Barber isn't enjoying the phone call he got this morning.

It's only one game. But for a game that redefined what bad umpiring was, sometimes you need confirmation as to what you see. Was it that bad, or was it exaggerated because the Mariners lost?

Yeah. It was that bad.