Look at this face. How can you boo this face?

Much has already been made of Robinson Cano's first trip back to New York City following his lucrative contract signing in Seattle. There's no question that his East Coast departure ruffled some feathers among the Yankee Faithful, and it's safe to say that the sound accompanying his first at-bat in Yankee Stadium will not be thunderous applause, but unrestrained antagonism.

Preceding Cano's appearance on the Tonight Show yesterday evening, Jimmy Fallon sent him to the streets of NYC to get a feel for the reception awaiting him. Cano was instructed to step inside of a box that was plastered with Mariners logos and a large cutout of his headshot, complete with a Seattle cap. Fans were first asked to verify their Yankee fandom, then to practice booing at the cutout.

The Yankees: A preponderance of pomposity 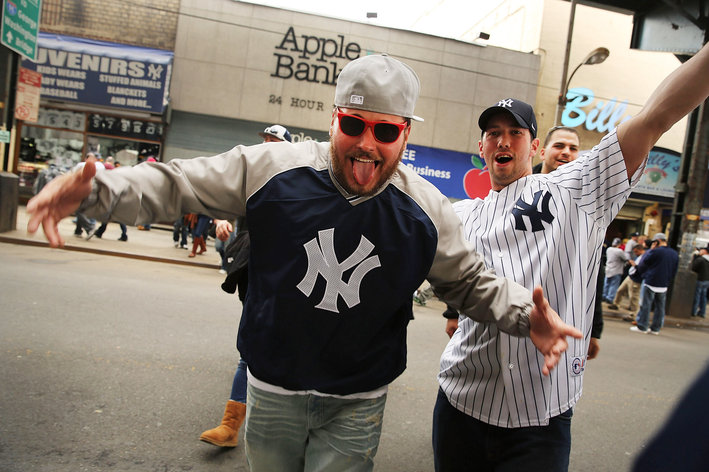 Robinson Cano is returning to Yankee Stadium as an opponent playing for that one team that plays way out there ya know?

The reactions ranged from mild expressions of disappointment to passionate bouts of cursing and screaming.

"BOO! YOU SUCK!" one fan yelled at the top of his lungs, waving his hands at the cutout until Cano stepped out. The fan laughed as he welcome Robbie back to New York.

One timid fan couldn't find it in himself to let loose at the picture, but instead spread his palms wide and tried to reason with it. "You got a beard now? Come on. You're better than that," he said.

Perhaps the best reaction was delivered by a fan who punctuated his shouts with a double-thumbs down at the box. When Cano opened the door, things got a little awkward. "I won't actually boo you," the fan said sheepishly. "I'll be rooting for you to, uh... play well but not win." Cue nervous laughter.

To their credit, each of the fans quickly recovered after seeing the slugger and extended him a handshake and a warm, if somewhat embarrassed, welcome. Robinson seemed to have fun with it -- admittedly, a lot more fun than he'll have tonight against a crowd that won't be face-to-face with the former Yankee, either to shake his hand or offer him a courtesy 'welcome back'.

"I left in a good way," Cano told Fallon later in the show. "I'll hopefully get a good standing ovation. But if it's not I'm going to have fun. I'm still going to have some love for the New York fans, for all those years I was here."

What do you think: If you were put in a similar situation -- but, say, A-Rod was in the box behind that cutout -- how would you react?