The final score was 6-5 and Kyle Seager turned those 8th inning frowns upside down with a 3 run blast to take the lead.

Kyle Seager won this game so he gets the first paragraph.  He dinged leading off the 7th with a solo shot and donged in the 8th to give the Mariners the lead with the 3 run version.  That's 5 home runs now for Seager and a wRC+ of 122 on the season.  You are free to worry about him if you choose.

Last Tuesday, in the midst of a 7 game losing streak, sick of the losing atmosphere in the clubhouse and fearing that the chemistry was off, I was forced to do something drastic.

Ok @Mariners I’m calling a team meeting. Can I do that? I’m doing it, it’s done. Team Meeting in session.

Things were bad and one of the tools in our belt when things are bad is the team meeting.  There has been much debate and derision about the effectiveness of these so-called "team meetings" over the years.  "Do they actually work", "what effect do chemistry and clubhouse atmosphere have on a team", and "do they work" are among the many questions people have asked.  To help answer that question we turn to another one of the tools in our belt: Results Based Analysis.

Would the Mariners have had the chemistry to come back from an early 5-0 deficit to the Rangers today if not for our team meeting?  I don't know, but they did.

And this game looked bad early.  It was a steep 5-0 deficit, worse than most 5-0 deficits it seemed.  The Mariners were getting perfect gamed through 3 1/2 innings and the Rangers had just tacked on 3 more runs in the top of the 4th.  Robinson Cano made it 5-1 with the Mariners first hit, an effortless and beautiful double that scored Stefen Romero.  And the game still felt somewhat out of reach.  Especially with starter Brandon Maurer already pulled out of the game and the somewhat shaky bullpen being needed to slow the Rangers down for 5+ innings.

But the bullpen came through and did more than slow the Rangers down.  Luetge, Furbush, Wilhelmsen, Farquhar, and Rodney each went at least an inning and only allowed one hit combined for the remainder of the game.  No more Ranger scores, but the Mariners were still down 5-1.

In the 6th the Mariners got a few more baserunners with another hit by Cano and another fucking pitcher throwing at Corey Hart's knees.  I think this one actually hit him just above the knee and he seemed fine chatting at 1st base, but man.  Cano would score on a wild pitch after advancing to 3rd on a flyball.  Still 5-2, still a little daunted.

And then Kyle Seager led off the 7th inning.  Kyle had previously struck out with the bases loaded to end the 4th and the doubters doubted.  Seager made it 5-3 with a solo lead off blast and shit, there might actually be hope in this game now.

Then in the bottom of the 8th, the game ended.  There's an off day tomorrow before the Mariners start their series against the Yankees on Tuesday, so see you then, friends.

But hahaha, Kyle Seager!  The 8th inning nightmares will not continue as the Mariners have had 2 very productive 8th innings the last few days.  After Cano and Hart struck out, Justin Smoak smacked another double and Dustin Ackley pinch hit a single to bring Seager to the plate.  His three run dinger in the bottom of the 8th gave the Mariners the 6-5 lead which would be the final score.  And of course that was the final score because dominant closer Fernando Rodney shut down the Rangers in about 75 seconds in the top of the 9th with 2 Ks and a flyout.

So to recap the recap: there was doom and gnashing of teeth and resigned failure and Brandon Maurer didn't make it out of the 4th and the bats looked helpless and some more questionable defense, and then there was Robinson Cano and the bullpen and Kyle "The Ranger Killer" Seager.  Kyle Seager.  Say his name with us.  May today's Ranger killing carry on and continue, forever and anon. 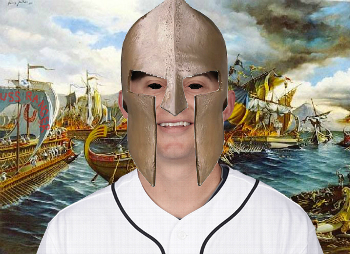