The future of Mariner promotions

Share All sharing options for: The future of Mariner promotions

With the Mariners off to another difficult start this season and the weather still stuck in "Attack on sight" the weight of the burden to draw fans to Safeco Field has, once again, fallen largely upon the broad shoulders of Kevin Martinez and his crack team of promoters.

Tonight, for example, should you make your way to Safeco and somehow find yourself among the 1st 20,000 people in attendance you will receive a beard hat. "The hell is a beard hat?" You may ask. Well: 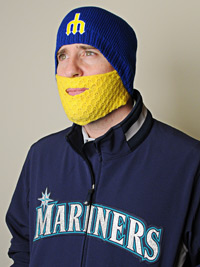 You see it's a hat but it's also a beard. I don't know what you were expecting. It's right in the name.

The Beard Hat is one of many excellent promotions the team is running this year. There's Dave Sims Fedora Night. There is Father's Day Mariners BBQ Spatula night. Amazingly, and most importantly, there is Salute to Sriracha Night, which everyone should go to. I mean a Sriracha Milkshake? I'll have two thank you.

The Mariners promotional staff is excellent, and this humble missive is not an attempt to tell them how to do their jobs. Nonetheless it's Friday and the closer we inch towards freedom the slower the ticking of the tocker. Therefore this author would like to submit a few rough concepts for future promotions for the team to consider.

Lenny Randle Blow the Ball Foul Bobblehead: In the dark, fuzzy reception of the 1980's the Mariners were then much as they are now, and losing was the norm. On May 27, 1981 Amos Otis hit a swinging bunt down the 3rd base line. The blighted, foreign substance of artificial turf allowed the ball to roll fair, ever fair. Lenny Randle saw an injustice and decided to act. He became a hero.

To honor this fell deed the give away is Lenny, posed over a base line. His posterior is squeezable and ejects air from his mouth, allowing you too, lucky attendee, to blow away whatever wrongly infringes upon you.

Carl Everettasauras: To celebrate the wide diversity of ideas in our vast world the Mariners pay tribute to their one their worst, and certainly most ignorant designated hitter.

Yuniesky Betancourt Bucket of Chili Cheese Fries Night: Once their was a man named Yuniesky. He loved to play baseball. He couldn't hit much but my goodness could he field. The lightness of his feet. The strength and accuracy of his arm. A latter day Rey Ordonez with the glove, Yuniesky was hailed as the next great Mariner shortstop. The heir to the throne of Visquel. Sadly life in Cuba had not prepared Yuniesky for the bounty of gastronomical delights America had to offer. Yuniesky ate, and he ate. He ate until he woke up on day in Japan, which is a lovely country full of it's own delights for the stomach. Yuniesky never became that great shortstop but he sure seems happy. So who's the loser now?

Adrian Beltre Cup Night: Adrian Beltre was, is and ever shalt be King Awesome. His offense was largely disappointing his time in Seattle but his defense, his defense and his hijinks will always be treasured by the fans. We celebrate his legacy with a simply cup bearing his visage. What? No a cup for drinks. What is wrong with you?

Ben Broussard Points To Rainier Statue: This one. Oh man. This one.

Here I lay a few thoughts. I encourage you as the reader to use the comments to offer your own ideas and thoughts for Mariner promotions. Have some fun. It's been a long week. You deserve it.