It's still early, but so far Abraham Almonte has made every effort to make opposing pitchers look truly awesome.

One of the more interesting stories of the 2014 Spring optimism magic bus tour was Abraham Almonte. After a respectable .264/.313/.403 line in a brief cuppa for the Mariners in 2013, Almonte quickly found himself, perhaps despite himself, a favorite to break camp as the everyday center fielder for the Mariners. Almonte, of course, came to the Mariners in 2013 via trade with the New York Yankees, who will apparently forever trash the Mariners in trades in a juvenile attempt to make up for Jay Buhner. And I'm not sure that the Mariners thought much more of Almonte other than organizational depth and/or potential bench-bat-speedy-fourth-outfielder when they made the deal.

But Almonte, as my mother Nancy would have said, just got curiouser and curiouser.

At the time of the trade, Almonte was hitting .276/.350/.392 with four home runs and 30 stolen bases over 78 games with the Trenton Thunder in the Eastern League. He had, up to that time in the Yankees farm system, demonstrated excellent speed, not a whole lot of power, but a decent eye and an ability to draw a walk. Coming over to Seattle, he continued to do just that. He hit .255/.367/.451 with four home runs and six stolen bases over 120 plate appearances with the Jackson Generals and then he really got behind the PCL lumber demo with a .314/.403/.491 slash line, 11 home runs and 20 bags over 94 games, which earned his call up.

By mid-March, it was a foregone conclusion that Almonte would stroke this crew, batting first for these Mariners despite a slash line lacking any luster of .178/.256/.301. And if leadoff hitters are there to set the proverbial table, then Abraham Almonte has left the rest of the Seattle Mariner lineup about as hungry as the Seattle Mariner lineup has left the fans. Perhaps expectations were too high for this 24 year old who recently came out of a personal fog thanks to a chat with the Big Guy, but Almonte has done none of the things for which he had come to be known. He's had a horrible batting eye, he hasn't drawn walks, he strikes out as if each whiff feeds a hungry child in Liberia, and even when he manages to get on, he hasn't put his legs on display.

So just what the hell has gone so horribly wrong?

To take a brief step back, let's put his strikeouts in proper context. Among qualified "major league" hitters (not insinuating anything at all with the quotations), Almonte ranks third in strikeouts. The top three look like this:

It's early of course, I know. But this isn't the way you want to keep company with Justin Upton. If you're going to strike out this much, you kind of need to be useful in other ways. You can see where Upton is useful. You can even see where Carter is kind of useful, despite his awfulness. But in 2013, there wasn't a single qualified hitter who had a strikeout rate over 30% who also didn't walk at least 10% of the time -- and all of them were classic three true outcomes hitters with power, patience, and wind. Right now, Almonte is a singular true outcome player.

Looking at his plate discipline numbers is rather intriguing though. If you looked over these figures and leveraged a guess on what kind of strikeout rate this player had, I'd probably say, 13-15%:

I can't decide if I'm encouraged by this or not. Because it's not as if Almonte is swinging wildly at balls outside the strike zone. In fact, 19.5% ranks him 11th among all qualified batters -- even besting the rather stingy Matt Carpenter by 0.2%. This is usually a really good thing, and his selectivity gives me visions of a Brett Gardner type, and perhaps that's an Almonte pie-in-the-sky prayer. The problem of course is the contact. Because call me old fashioned, but you still need to make contact to get a hit. And while Almonte not flapping madly at balls out of the zone is a good thing, it's perhaps ever more disturbing that he's unable, seemingly unwilling, to make contact with balls thrown right down Broadway.

Migrating over to our nerd pals with Brooks Baseball, we can see where Almonte typically swings at pitches, and this tends to reflect the O-swing data we see above -- he's doing a decent job of selecting balls in the zone, although we can see he also tends to offer at pitches down and away when he does swing out of the zone: 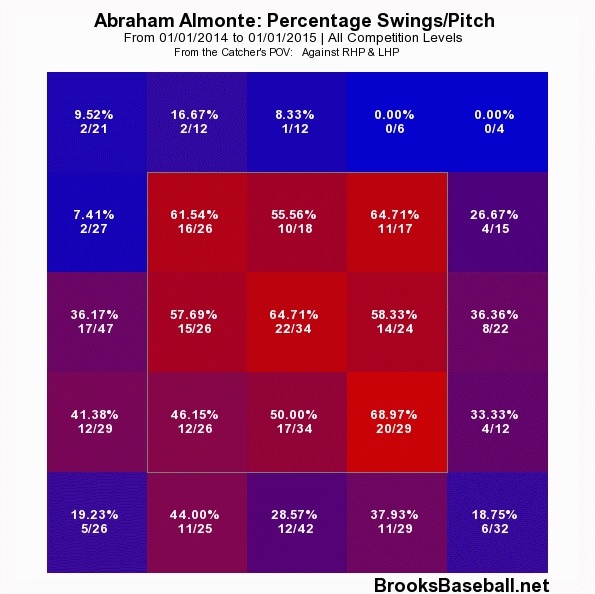 And then juxtapose that with his whiffs per swing data, and you start to see where Howard Johnson has his work cut out for him: 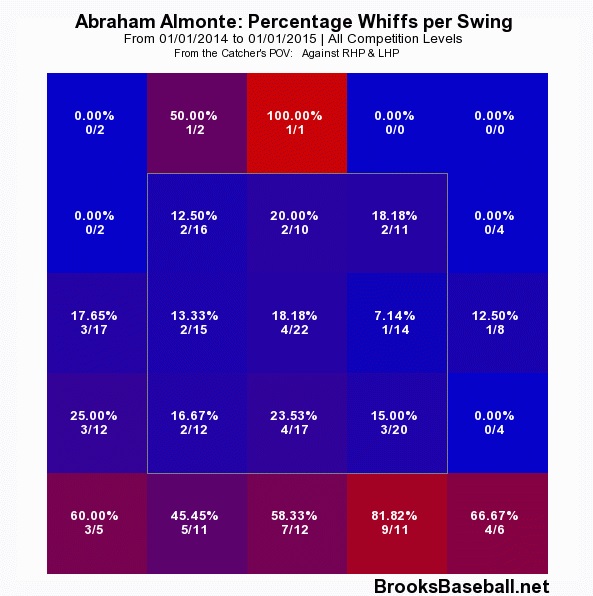 You have to be careful to not let the hot/cold deceive you here due to the scale. Because while it's jaw-dropping that Almonte is swinging and missing on the number of balls low in the zone, it's almost worse that balls thrown right in his wheelhouse he's missing 18-24% of the time.

While we're with Brooks, they have some lovely tabular data where we can see what pitchers are throwing batters, outcomes, and you can manipulate for count. The following is a little animation, because yay gif's, to overlay his 2014 season to date with how he performs in two strike counts. His results might be underwhelming overall, but it's like he's not even there when he has two strikes. A little more on this later.

But it's the following chart that has me reaching for a serotonin antagonist of any kind. This demonstrates how Almonte has fared through each count. Not only has he been pretty terrible when ahead in the count, it's almost unbelievable how impotent he has been when the count is even or he falls behind at all, let alone two strikes:

Look at those walk rates and look at those strikeout rates as you work down the list. Ahem.

I'm not a major league coach, obviously. I don't know what kind of intangibles or leadership Almonte might bring to the team. I don't pretend to know how hard it is to hit in the major leagues. But I think what most would take away from the information above is that Almonte is having a fundamentals problem, at a minimum. As in fundamentals of hitting.

What he's brought to the Seattle Mariners lineup has essentially been the equivalent of having a pitcher bat leadoff for 21 games to start the season. This doesn't strike me as the kind of problem that should get worked out on the stage where it's supposed to matter. For an organization willing to yo-yo a guy like Nick Franklin, it's a little shocking to me that they haven't at least entertained the idea of giving Almonte a day off, and perhaps a few, to just see what hitting looks like from the sideline for a bit. A breather, if you will. Frankly, the way they have run Almonte out there gives you a window on how stubborn Lloyd McClendon might be, for better or worse.

Lastly, I'd like to thank Baseball-Reference for their pronunciation guide on Abraham Almonte, because I've apparently been saying it wrong all along. It's pronounced "\al-MOAN-tay\" which right now, couldn't be more appropriate.