Whether you like it or not. Fortunately, you should, for the most part.

Share All sharing options for: Roenis Elias is here

It's funny how a week can change an article. Last Wednesday I was all ready to pen a piece about Roenis Elias, the Mariners' latest semi-wunderkind, and how his unlikely rise to decency seemed to mirror the team that employed him. However, Colin had already written a fantastic piece about his origins, and it seemed tacky to worry about a meager thing like baseball after talking about what he was going through.  "Let him pitch one more game this weekend," I told myself, like an idiot. "It's against the Marlins. How much could the story change in one week?" In reply, the universe softly chuckled.

Elias wound up getting scorched for six runs, the Mariners for eight losses, and perhaps worst of all, the present author was deprived of several narratives. A week ago, the question was whether Elias had earned himself a permanent spot in the rotation once Iwakuma and Walker returned. Now, with Walker's setback, Paxton's injury, Erasmo's performance and Chris Young looking like a glass opposite-of-cannon, there can be no more asking. Roenis Elias is here for a while, perhaps for good.

The second question, whether he could keep up his early success, seemed to be similarly defined. Through five innings in his last start, he'd given up a reasonable two runs, one on a passed ball. Then the sixth inning happened, and a single, belt-high fastball seemed to undo a month's labor. The game ended like an artistic depiction of drowning, complete with lengthy credits sequence. Fade to teal.

It was far and away Elias's worst start of the young season. It was also, in many ways, his most encouraging.

The question wasn't whether Elias would regress, but how much. On the morning of April 19 Elias was the proud owner of a 2.16 ERA and a 3.88 FIP, the latter right around league average. Of course, a league-average Elias would be an incredible gift to Mariners fans, considering the quality of the team's unnamed fourth and fifth starters last year. But there were plenty of warning signs: a decent velocity that belied a below-average strikeout rate and an above-average walk rate. Imagine a Joe Saunders that threw a little harder and a little wilder, was a little luckier, and who had a face you didn't instantly hate. That was Roenis Elias through three starts.

(All maps thanks to Brooks Baseball, blessed be its name)

First impression when you see a graph like this: wow, that's a lot of pitches outside the zone. That's the kind of pitching that will net you five walks. But sprinkled among all that nasty green are an encouraging number of yellows. Compare to Elias's more results-fortunate third start of the season:

Elias threw a lot more strikes in this game, but they're not the good kind of strikes. The good strikes are the ones that hitters can't do much with even if they do swing. In game three the Rangers were getting a lot of pitches up in the zone, and they were fouling them off. They chased and missed six, which is more than he got to chase in the first two games combined. But still, the wonderful Elias of pre-4/19 was getting very, very lucky.

In game four, however, an obviously wild Roenis was getting Marlins hitters to swing at pitches way out of the zone, something he hadn't really done before. Strangely, despite the inaccuracy he actually posted a season-best 72.4% first-strike rate and 12.6% swinging strike rate, both well above MLB average. He was getting ahead, but his finishing pitches weren't quite close enough to make batters swing defensively. And when he missed, he tended to miss low and out of the zone rather than up in the sweet spot. Missing down is better, especially with Zunino around to frame a few of the close ones.

Elias could succeed throwing 91 up in the zone - it's what Chris Young does with practically every pitch, give or give a few mph - but it's hard to do and you have to hit corners far more reliably than Elias is right now, or will for a while. When you don't hit the corners, you get this: 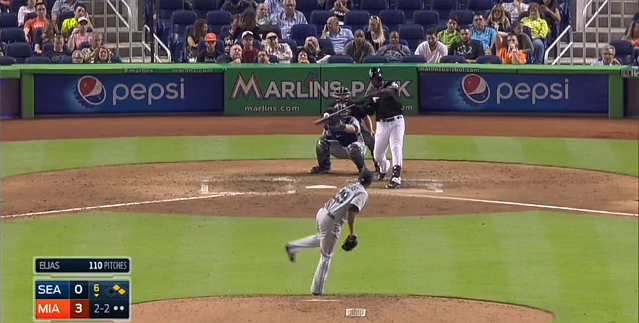 And that's how one pitch underscores a theme. Technically, it's a ball, slightly out of the zone. Marcell Ozuna does not seem to mind.

Roenis Elias is here. He's technically the team's second-best starter at this exact moment, if you want to be depressed. But if this were Houyhnhnm, Elias would be in Tacoma. Ironically, it's his success that incentivizes his demotion: in March he was a stopgap, the five bucks you find in your jacket that allows you to rationalize blowing ten bucks on a free-to-play iPhone game. Now, he's shown enough progress to factor himself into some sort of future, however nebulous and terrifying any Mariners future might appear. And he has a problem that needs to be fixed:

Release points are strange. Some pitchers, usually veterans with little left, try varying their release point for the sake of deception, although the evidence hints that it may not really do much. Trainers and coaches preach a consistent release point to go with consistent mechanics. There doesn't seem to be hard evidence of a correlation between a muddy release point and command/health problems, but one wouldn't surprise anyone very much. For Elias, a far greater percentage of those lower pitches have found themselves well wide of the zone.

It's something he needs to get tightened up, if not for his command, than at least to keep another corpse out of the morgue. Unfortunately, the way the dice have come up, it's simply not a luxury the Mariners will have for a long time. All we can do is hope that he can earn his stripes in live combat.

And if not, he's already the greatest Roenis in baseball history, the second-greatest Elias, and six million dollars cheaper than Joe Saunders was last year. It's more than we could ask for.