The best part of last night's Mariner game was a foul ball.

Share All sharing options for: Mike Zunino's spectacular nothing

A sad rite of the passing Mariner season is the fading of hope. We collectively suffer through months of wet darkness, clinging to each other, watching earnestly for roster news and distracting ourselves once a week with the beautiful barbarism of football. Every March there is hope. If Spring Training ever opens and I don't feel hopeful then it's off to a new hobby. This Spring had Robinson Cano and James Paxton and Taijuan Walker and BRAD MILLER WOOOOOO!!

Well now here we are. The team has lost 12 of 16. They have lost with bad pitching, bad hitting and bad fielding. They lost to the Astros with Felix pitching. Times are as grim as they are familiar.

This sounds like I'm eulogizing the season nineteen games in. I'm not. Things could change. But the Mariners have carved a deep, wide rut for me to rest my pessimism in and as such it gets easier to find every year and harder to work my way out.

But, at the risk of sounding preachy I will say that joy can be found almost anywhere, same as misery, and sometimesa little intentionality is all that is needed to shake the blues. Last night's game was the worst of the season so far for me but contained Mike Zunino hitting the everloving Snodgrass out of a baseball.

First we must back up and remember that when Safeco Field was opening the idea of players hitting the ball onto Royal Brougham Way was discussed in a fairly matter of fact manner. Estimates varied between 460-475 feet for a ball to clear the roof tracks. Given that baseball was in the midst of an industrial-chemical revolution massive blasts to throngs on the street, a la Wrigley, seemed only a matter of time.

Obviously that wasn't the case (I enjoyed this old P/I article, written in anticipation of the 2001 All-Star Home Run Derby trying to figure out how a ball could actually be hit out of the stadium). The closest I remember a ball getting to leaving left field was when Jamie Moyer threw a fastball a foot inside and Vlad Guerrero took a giant step back and obliterated it about 15 rows into the bleachers. Sadly I cannot find visual evidence, partially because I don't know which home run it was since I believe half of Guerrero's career home runs were against Moyer. FOOTAGE FOUND! (thanks again Colin) Here are 2 of Guerrero's 9 (!) home runs against the Mariners in 2005. The 2nd one is the one I remembered.

(If you're interested and have time there's a lot of fun stuff to read on what makes a baseball travel, and how weather effects it.)

So back to last night. First of all, Mike Zunino is strong. If you'll pardon the horn tooting I tweeted this out a few weeks ago:

Someday Mike Zunino is gonna actually get all of one and the baseball's going 470 feet away from him.

Chad Qualls was nice enough to help us test my hypothesis. In the 7th inning he threw a 2-2 sinker to Zunino. Jason Castro wanted it here: 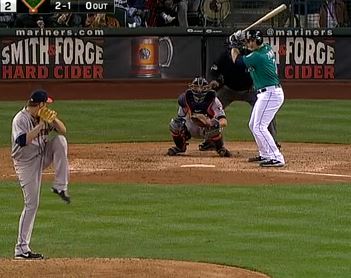 Qualls instead missed up and in here: 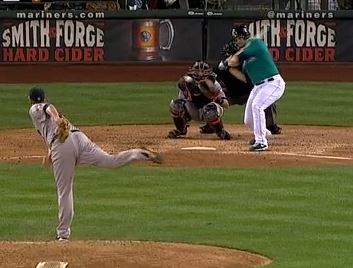 And Mike Zunino hit it here (enhanced with technology): 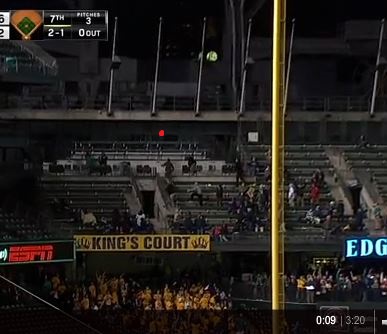 The ball was ruled, probably correctly, foul. I say probably because when the ball clears the foul pole by 40 feet we are really left with little more than a guess. 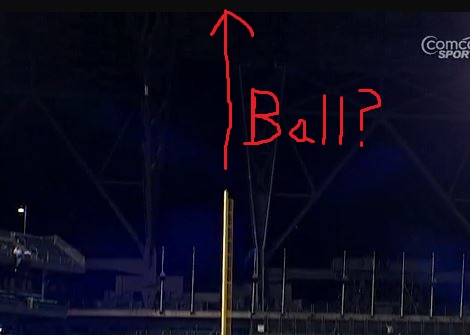 And a gif (Thanks Colin):

Keep in mind that first pitch was 54 degrees. By the 7th inning that temperature had certainly dropped into the 40's.

As we move through the Spring it's beginning to look like the Mariners may be telling us a story we've heard waaaaaaay too many times before. But we'll keep watching and who knows, sometime in August with 80 degrees and a favorable wind, Mike Zunino may get all of it and give us something we've never seen before.