Is this really, finally happening?

Share All sharing options for: The insanely encouraging April of Dustin Ackley

Yesterday, I tried to convince you not to give up on the Mariners by pointing out that many of their perceived problems are not sustainable. Today, I'm going to take a different tack and observe something encouraging: Dustin Ackley looks amazing.

A website that you'll probably be seeing me reference a lot more in the future is the fabulous Baseball Savant, which burst onto the scene last year as a cleanly organized and beautiful data repository with a bushel of neat applications on the side. Unlike most of the database sites out there, BBS feels cohesive, complete, and intuitively laid out while presenting a metric buttload of information. Some of this information, not coincidentally, pertains to Dustin Ackley.

Scroll all the way down to the "strikeouts" figures, and the good news practically jumps off the page. 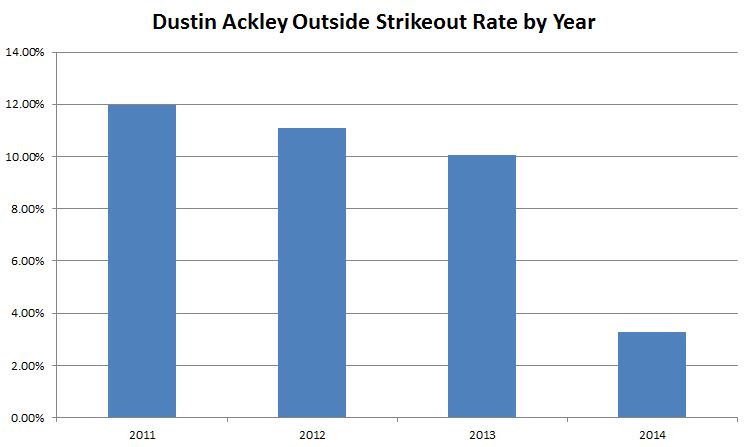 In each of his first three seasons, Dustin Ackley ended 10% or more of his plate appearances by striking out on an outside pitch. So far this season, that number is 3%. Three. And the funny thing is, his whiff rate hasn't really improved. He's still swinging and missing at roughly the same rate of outside pitches as he always has. He's just not striking out looking on the outside half of the plate. The difference is being made up in outer half hits, as his hit rate on outside pitches is 130% its previous highest value. Baseball Savant doesn't make it particularly easy to see where those hits went, but I'd be willing to bet most of them went to the opposite field.

The key to his adjustment is in his swing rates. Remember, Swing% is one of the statistics that stabilizes fastest, and a big difference this early in the season does likely indicate a change in approach. So far in 2014, Ackley's Swing% is up by five percentage points. It looks like he's putting his money where his mouth is. and really, truly being more aggressive - especially within the zone.

Pitchers, of course, are adjusting in kind. No longer able to get him for gimme strikeouts on the outer half, they've started to pound the zone. Ackley's seen the second-highest strike rate among all qualified hitters, and it's been the reason for his abnormally low walk rate. It's probably also been responsible for his career-high ISO.

The battle for Dustin Ackley's future has not yet been won. If he fails to turn the ridiculous number of in-zone pitches he's seeing into some extra base hits, pitchers will continue to assault him with strikes, preventing him from reaching his ceiling. If, however, he can start turning around those extra strikes and sending a few over the fence... look out, American League. Dustin Ackley is coming to get you.

There is a potential future where Dustin Ackley is very good. I've never written this at Lookout Landing before, because it seems like the kind of optimism that just asks for a player to fall flat on his face, but - well. Here goes:

The comp that optimistic people like to use for Dustin Ackley, now that he's moved to the outfield, is Alex Gordon. I don't really see it. Gordon swings way more, makes less contact, and has a much stronger arm. The comp that pessimistic people like to use is Jeremy Reed, which is incredibly depressing. I have my own personal comp for Dustin Ackley. There's another outfielder who runs well, almost never swings, and makes a ridiculous amount of contact. You might know him. The Yankees just gave him a lot of money.

His name is Brett Gardner.

Come on, Dustin. Make me proud to own your shirsey.